Thoughts on engineering from the Editor.

(This article has been updated to add comments from the project developer.)

Pumped hydro but without the water. That’s the essence of an energy storage project that in late April moved one step closer to being built.

The 50-megawatt design is expected to provide 12.5 MWh of energy for grid stabilization. Energy will be stored and released for dispatch to the western grid via the Valley Electric Association, which has a transmission tie to California, offering access to this green-power-hungry market. The project is expected to have a service life of up to 40 years. And it is a full-scale version of a one-quarter-scale demonstration project that had been operating for several years in the Tehachapi Mountains in California. 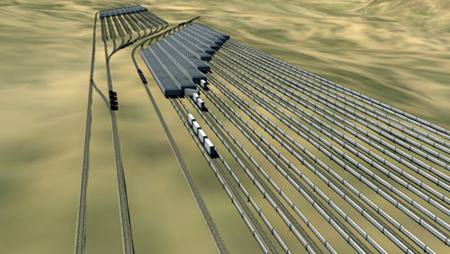 Artist's rendering of the storage yard. Note the pivoting load on the rail car. Image source: ARES North America.In simple terms, the system will work this way: A fleet of electric trains will haul flatcars weighing 230 tons each up a 5.5-mile-long incline to an elevation some 3,000 feet above their starting point. When grid stabilization services are needed—say at times of fluctuating output from renewable energy resources—the trains will roll downhill at speeds of just under 19 mph. On their descent they will use regenerative braking to generate electricity and deliver it to the grid. (Watch a video of how the system will work.)

The Energy Department’s Global Energy Storage Database says that power electronics for the project will be supplied by Yaskawa and ABB.

The system has something of a Scots chemist-Greek mythology elegance to it. For one thing, electric locomotive technology is well established and dates at least from the late 1830s, largely the work of Scottish chemist Robert Davidson. ARES says the electric locomotive technology needs no modification for its energy storage project. For another, the underlying principle—haul a heavy weight uphill and then let it roll back down—smacks of Sisyphus, who was condemned by Zeus to roll a boulder uphill for all eternity only to have it roll back down. (Who says the classics are dead!)

The developers claim their project will have a small environmental footprint and that generally seems plausible. For one thing, they say the project will generate no emissions. Keep in mind, however, that the region’s generating mix includes coal, nuclear and natural gas in addition to renewable energy. Because the project will draw electricity from the grid and store it at the top of a hillside, some folks might argue that the project’s environmental impact is actually at a conventional power plant some miles away.

The developers also say that the project will use no water. Compared to a pumped storage facility that's certainly true. But in a filing with Nevada utility regulators, the developers said that water would be used for dust mitigation, much like many solar energy farms use water to wash away dust. Although it will occupy roughly 106 acres, from a distance the rail storage system could resemble a long zipper along the hillside, complete with overhead electric wires to power the locomotives.

And much attention has been given to mitigating the project’s possible impact on the desert tortoise, a species that looms large in many development projects in the desert southwest.

More broadly, the developers say that the location on BLM land is one of the best sites in the world for their project. That seems both good and bad. For one thing, building on federal land can reduce the number of regulatory permits and government agencies involved, thus reducing up-front development costs. But if the Nevada location ranks as one of the best locations in the world, then almost any other development site will likely present more complex (and presumably costly) development obstacles.

The developers claim that a typical project will cost roughly 60% that of pumped hydro. Francesca Cava, vice president of Operations for ARES North America, says in an email that project cost comparisons depend on the size and application on the project. "In general, we are about 60% of a comparable pumped hydro facility." She says the company does not consider batteries as competitors "as we would typically operate at much larger sizes. However, we can approximate $0.08/kw-hr for certain energy storage applications."

She also says, "Remember, we don’t generate energy, we store it. Also, if you do ever try to compare technologies it is not always a level playing field. Batteries, for example, would need constant replacement to operate the way we do and they rarely include replacement/disposal costs in their estimates."

Cava says that the grade depends on the kind of ARES configuration, its size and the storage application. "In Nevada we are at ~8% grade performing ancillary services mostly because that is the grade. In that type of application 5-9% works." She says that the system can perform at much steeper grades for larger projects "depending on the need. If you have ever been to Switzerland, you can see cog rail applications at 30-40% grade."

The project developers provide the following details around the expected performance of the energy storage system:

For a 333 MW project with eight hours of storage, the developers offer the following expected characteristics:

Plans suggest that each energy shuttle trip stores around 2 MWh of potential energy.

The idea is an elegant one in that it works using existing technology and gravity. Its infrastructure needs appear modest although development costs could vary based on geographic complexity. Published reports say the developers still have several months of fundraising to do before the project can move ahead. Once it does, however, rail storage technology may gain a foothold among technologies aimed at storing energy. Maybe call it part of the search for the “holy rail” of energy storage, eh?