Techrules, which debuted its turbine-recharging electric vehicle (TREV) system at the Geneva International Motor Show, in March, is scouting locations in Europe for a production site from which it can manufacture "China's first supercar." The Chinese automotive R&D company says it plans to begin series production "in the next two to three years" of a car with the TREV technology—an innovative range extender system that uses a micro-turbine to generate electricity to charge a battery pack.

The company previewed the technology to much curiosity in Geneva in the form of a plug-in hybrid prototype, which the company says produces peak power of 768 kW, has a range of 2,000 km and achieves fuel consumption of 1,569 miles per gallon. Unlike previously developed turbine powertrain systems, Techrules says there is no direct electrical feed from the generator to the electric motors—TREV is purely a hybrid range extender system. 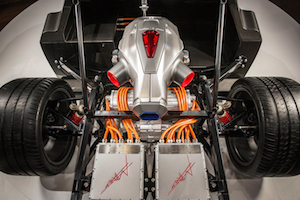 The micro-turbine of Techrules' supercar prototype. Image credit: Techrules.Two configurations of the turbine are ultimately expected to be made available: one that runs on a liquid fuel such as aviation kerosene, diesel or gasoline and a second designed to run on a gaseous fuel, such as biogas or natural gas. The AT ("aviation turbine") is planned for the supercar, while the GT ("gas turbine") is intended for use in a planned higher-volume model Techrules intends to roll out at some point later.

In either design, air drawn into the micro-turbine is passed through a heat exchanger, where heat from the exhaust air is transferred to the cold intake air after it has been compressed. Ignition of the compressed and heated fuel-air mixture generates energy that turns the turbine vanes. As hot exhaust gas is expelled, it passes through the heat exchanger, which recovers the heat energy, transforming the gas into cold intake air.

"Because turbines have always been a very inefficient way to convert chemical energy into useful wheel-turning mechanical energy, only a few have tried to use a turbine in the powertrain system, and none have ever succeeded commercially," says Chief Technology Officer Matthew Jin. "But with electric vehicles, an electric motor is used to drive the wheels, which effectively frees the combustion engine to exclusively convert chemical energy into mechanical energy and finally into electric energy."

According to Techrules, micro-turbines are significantly more efficient than piston engines in range-extender applications because much less energy is sacrificed in frictional losses, meaning more of the fuel's chemical energy is harnessed.

The turbine shaft powers a generator that produces electricity to charge lithium-manganese-oxide battery cells. In Techrules' TREV configuration, the turbine and the generator share the same shaft and rotate at the same speed: over 96,000 revolutions per minute.

· Air-bearing technology—a high-pressure feed of compressed air in place of a traditional oil lubricant film to separate the shaft from the bearing—results in less frictional energy loss, since it eliminates the parasitic losses of a mechanical bearing.

· Smart battery balancing that harnesses "excess" voltage in cells that are charging more quickly, sharing their charge with slower-charging neighboring cells to achieve the desired balance.

By posting a comment you confirm that you have read and accept our Posting Rules and Terms of Use.
Advertisement
RELATED ARTICLES
The Deprag GET turbine generator that pays you back
Toyota Tests Hybrid Power Generation System
Details of New Hybrid Supercar Unveiled
Video: Development of world’s largest non-hydro energy storage system
CHP: Growing Interest as Energy Efficiency Goals Expand
Advertisement