Despite fast-changing technologies among information, communications and pharmaceutical sectors or even paradigm shifts in fields such as genetic engineering and nanotechnology, the steam turbine has maintained its principal role for more than a century. And, although renewable energies are poised to replace traditional carbon heavy fuels, the timeless steam turbine will likely remain an essential element of power generation.

Dating from the 1st century A.D., Hero's Aeolipile was the first recorded example of a steam engine. Although without practical application, this Greek invention was the first known device that moved by steam pressure. 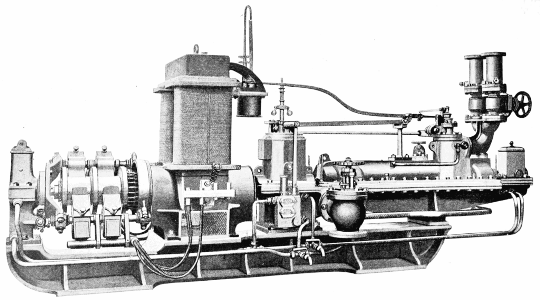 (Click to enlarge.) The 1884 Parsons turbine. More than a century later, the fundamentals haven’t changed that much. It wasn’t until around 1700, however, that steam was theorized to drive water pumps used for mining. By 1800, English inventor James Watt introduced practical steam engines capable of doing real work. Locomotives and steamships came shortly thereafter, enabling mass transportation. Steam engines drove the industrial revolution by tasking machines with much of the slow and tedious work formerly performed by man or beast. Factories were better able to produce at previously unimaginable paces.

In 1884, Sir Charles Parsons of Great Britain designed and built what is thought to be the first practical steam turbine-generator capable of producing 7.5 kW (10 hp) of electricity. The steam turbine made cheap and plentiful electricity possible. Parson’s turbine design would be recognized today. Aside from a change in scale as well as the use of exotic materials to accommodate higher temperatures and pressures, basic steam turbine design has not changed much at all.

Regarding the turbine itself, in simple terms, a set of fixed nozzles inject the steam through the stator to the rotor. Steam passes along the length of the machine through multiple rows (stages) of alternately stationary and rotating blades. From the point of steam entry in the front to the exhaust in the rear, the turbine’s blades and cavity grows in size to accommodate steam expansion. Each row’s blades work as nozzles to expand the steam at a higher velocity but decreased pressure. 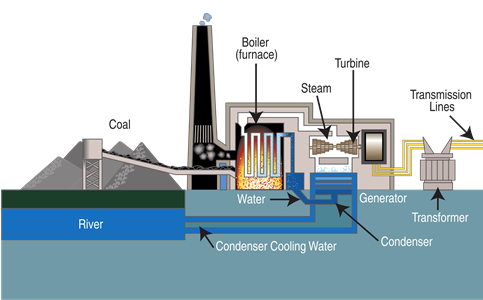 (Click to enlarge.) Diagram showing basic operation of a coal-fired power plant with a steam turbine at its core. Image source: Wikipedia As the steam impacts the next row of blades, kinetic energy is imparted and a reactive force is created on the blades. The blades create the turning moment on the turbine rotor. Akin to Hero's steam engine, the rotor essentially becomes a set of rotating nozzles turning at anywhere from 1800–3600 rpm. Of course, the blades and rotor are entirely enclosed within an outer casing designed to tolerate elevated temperature and pressure conditions. The steam passes through the turbine and then condenses to water and recirculates back through a heat exchanger (boiler or steam generator) with makeup feedwater to repeat the process.

Heat sources vary greatly and include natural gas, coal, nuclear, geothermal, concentrated solar and waste incineration. In contrast, gas combustion, hydro and wind turbine electric generation do not use steam at all. And small-scale generation such as diesel and photovoltaic panels are independent of turbines altogether.

Unlike a tea kettle’s “wet” steam, steam turbines require dry, “superheated” steam. The power plant’s boiler or steam generator first produces wet (saturated) steam which is then passed through a superheater. This process transfers additional heat to the steam through conduction and radiation. The steam is heated to a temperature exceeding its boiling point so that all liquid water evaporates. This dry steam is further heated and the specific enthalpy of the steam increases. Such steam, at a temperature higher than its boiling point, is called superheated steam. Conversely, saturated steam is in equilibrium with liquid water; its temperature is equal to the liquid water and it corresponds to the boiling point at the given pressure.

Most boilers are “subcritical” and produce steam at pressures in the range of 2400psi. A new generation of power plants operates at pressures higher than the “critical” pressure of steam or 3200psi. Their “supercritical” boilers exceed superheated temperatures and pressures such that the latent heat of vaporization is forced to zero. At this point, water transitions directly to dry steam without a saturated phase. Technically, supercritical steam generators are not “boilers” in the traditional sense because “boiling” is bypassed. 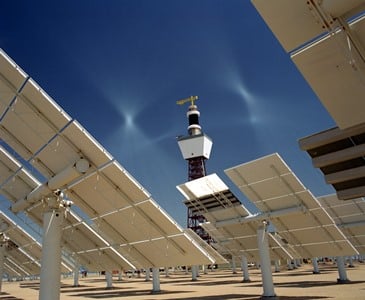 A solar tower’s heliostats focus sunlight to generate heat in order to run a steam turbine. Image source: NREL.Steam turbines have need of superheated steam for two reasons. First, superheated steam has great internal energy that creates a kinetic mechanical expansion against the turbine blades while staying above the condensation temperature of water vapor. This is of primary importance because entrained water droplets, at the high velocities within a turbine, strike internal moving parts with tremendous force and may result in damage. Superheated steam, coupled with the reducing pressure effect of expansion, safeguards the turbine from internal damage by maintaining steam in a gaseous form.

Second, Rankine cycle efficiency is dependent upon pressure. Turbine output and thermodynamic efficiency (directly related to operational costs) both improve with higher steam temperatures and pressures. Many of today’s modern steam turbines drive generator sets of 1,000 MW or more (in excess of 100,000 times the Parson turbine’s output of 1884).

Steam turbines have advantages and disadvantages related to the heat source that creates their steam. The efficiency of turning water into steam is the primary advantage of nuclear power although strong arguments exist over the risks of nuclear accident and spent fuel disposal. Coal and other fossil-fueled plants also use efficient heat transfer processes but do so with relatively large carbon footprints.

Concentrated solar power, although a clean and renewable heat source, is currently the least efficient of the steam heating technologies. And geothermal plants capture heat from naturally occurring sources to drive steam turbines. They are clean, sustainable and reliable source of heat, but are geographically limited.

Virtually timeless and elegantly simple, no other technology has proven as effective at transforming thermal energy to mechanical energy on a comparable scale. Steam goes beyond power generation. A century ago, steam-driven vehicles and ships reached speeds and efficiencies which are, to this day, difficult to achieve despite modern technologies.

By posting a comment you confirm that you have read and accept our Posting Rules and Terms of Use.
Advertisement
RELATED ARTICLES
Watch: UK nuclear power plant to receive largest last-stage blade ever made
Power from the Earth: A look at the Geysers
Steam Accumulation: An Energy Efficient Technology
Steam vs. Combined-Cycle vs. Cogeneration: Understanding the Basics
Improve jacketed heating systems with direct steam injection
Advertisement