Scientists from Ecole Polytechnique Fédérale de Lausanne (EPFL) in Switzerland have developed a microchip that filters out unwanted radiation using graphene. The chip was tested by a team from the University of Geneva (UNIGE) that determined the chip could increase data transmission up to 10 times than speeds currently available.

EPFL scientists say the graphene-based microchip could be a building block for faster telecomm applications at frequency bands currently not accessible. 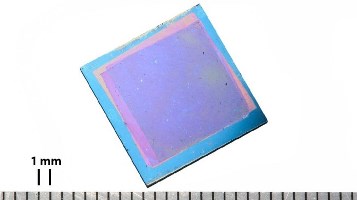 Novel microchip uses graphene to filter out radiation. Image source: EPFLThe team discovered that graphene can filter out radiation in the same way polarized glasses do. Because the vibration of radiation has an orientation, the graphene-based microchip assures that only radiation that vibrates in a specific way gets through. This makes the chip both transparent and opaque to radiation, depending on the signal direction and orientation of vibration.

The team used this property to create an optical isolator. The chip works by protecting the sources of wireless data from unwanted radiation, which reduces source corruption and keeps the data intact: wireless data is essentially a source of invisible radiation.

Additionally, the chip works at the Terahertz bandwidth, a frequency that is currently empty, but has the capacity to run up to 10 times faster than the now-used Gigahertz range or optical frequencies. The chip also uses the non-reciprocal optical conductivity of graphene. The team has shown that despite its relatively simple design, the chip exhibits almost 20 dB of isolation and 7.5 dB of insertion loss at 2.9 THz.

By posting a comment you confirm that you have read and accept our Posting Rules and Terms of Use.
Advertisement
RELATED ARTICLES
Team develops prototype wearable thermal camouflage jacket
The Technology of Metamaterials
Terahertz Waves: Poised for a Breakthrough?
'Metasurfaces' Can Bend Light, Produce Invisibility
Vanishing Electronic Chips? A New Breakthrough Allows Circuits to Disintegrate
Advertisement