Not Yet the Holodeck, But Holography Is Coming to Engineering

At a time when virtual and augmented reality tools are coming to market with increasing speed, where stands the hologram? And how will engineers use holography in the near (that is, nonscience-fiction) future?

Although products like the HoloLens, recently introduced by Microsoft, make use of what’s called augmented reality, those products don’t make use of true holography, says V. Michael Bove, head of the Object-Based Media Group at the MIT Media Lab. Holograms are produced by a laser and appear in three dimensions.

Instead, that Microsoft product calls upon augmented reality (AR), which differs from virtual reality (VR) and has a number of uses in gaming and engineering, says Piers Harding-Rolls, head of gaming research at IHS. 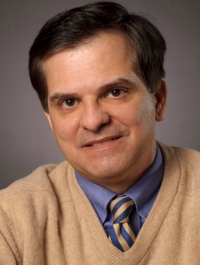 V. Michael Bove, MIT Media Lab. Holography has a range of useful applications in areas including microscopy, metrology, nondestructive testing, but the gaming and entertainment communities have been drivers for the technology. And engineers may be among those to benefit, Bove says.

While not quite as advanced as the Star Trek hologram, which allowed people (and nonhumans) inside a holodeck to interact with inanimate objects, advances continue to improve holographic printing, projection, and television, he says.

Bove says that the future of holography isn’t in wearable devices. That’s because they can cause conflicted depth cues between the eye and the brain. The result is that wearer-users often don’t point to the exact spot they intended to on a projected image, a problem for engineering use.

“In all likelihood the first displays are going to be on something like a smartphone and not on your living room wall,” he says. “You’ll need an electronic device where you can have half-micron pixels that can be changed 30 times per second.”

But he doesn’t doubt the need for holography in the near future.

“We have a lot of 3D data; everything from medical sans to molecular models used for drug discovery to the CAD models used to design everything,” he says. “We want to look at it in actual 3D, not in 2D that is supposed to look like 3D.”

Bove ranks as one of the leading holography researchers in the United States. He’s involved in a long-term project to perfect a holographic chip that can support displays of more than 50 gigapixels per second. The chip would be able to simulate real-life objects by bending projected light in a continuous range of directions. Doing so eliminates the need for three-dimensional glasses, he says.

“The recent resurgence of interest in 3D video for entertainment applications has underlined the limitations of left and right stereoscopic imaging and created a desire for more natural 3D imagery in which no glasses are required and all perceptual cues to depth are provided in a consistent fashion,” Bove wrote in paper in the April 2012 edition of the Proceedings of the IEEE.

On a lesser scale, he says, most people are probably carrying a few holograms in the form of the security seal that appears on most credit cards. The rainbow-tinged security holograms—used because they’re difficult to forge--were developed at the Media Lab by the late Steve Benton, a professor of media arts and science at the lab.

Harding-Rolls of IHS agrees with Bove on at least one note. Microsoft’s HoloLens isn’t a true holographic device, although the name implies that it is. Instead, the wearable device calls upon augmented reality, which not to be mixed up with virtual reality, Harding-Rolls says. Those wearing the HoloLens still see their surroundings, though a virtual image is projected into the view. The image appears to “float” in front of the viewer, Harding-Rolls says. A viewer might see a virtual space ship landing on the desk in front of them, for example.

This approach differs from the recently released Oculus Rift from Oculus VR, which makes use of virtual reality to immerse a user in a completely virtual environment.

Both devices resemble sunglasses that wrap around much of the head. Microsoft calls this an “untethered environment.”

“We’re still constrained by the need to conform to the ways computers recognize our commands through mouse clicks or by touching a screen,” said a Microsoft spokesperson in an email statement to IHS Engineering360. “Using holograms, you can pin your digital content, such as apps, information, and even multi-dimensional videos, in the physical space around you, so you can interact with them in the same ways that you interact with other physical objects.” 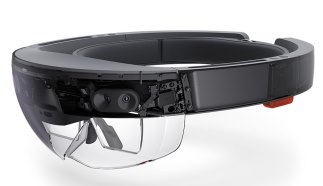 Microsoft's HoloLensThe Oculus Rift is a consumer product being marketed to gamers. Microsoft by contrast has positioned the more expensive HoloLens for use in business-to-business environments, Harding-Rolls says. The HoloLens is priced at around $3,000.

The HoloLens and other wearable augmented reality devices like the Meta 2 augmented reality headset, which sells for about $1,000 and is tethered to a computer, may open new ways for engineers to work, Harding-Rolls says. For example, a designer might want to look at her design in 3D and rotate it to get a good look at it.

“Some smart glasses have been used in applications like ship building, where engineers can overlay the electric plans and the pipework plans on top of the 3D design and rotate it in space,” he says. “That way, they see how plans will look in the finished environment while they’re still working the design environment.”

The device gives engineers a view into the 3D CAD design environment they see on their computers, he says.

Two engineers wearing the headsets can suspend a design between them and rotate it to see how it will look when finished, says Adam Ellison, a mechanical engineer, who founded Modbot, a San Francisco-based company that makes robotic building blocks to configure industrial robots. 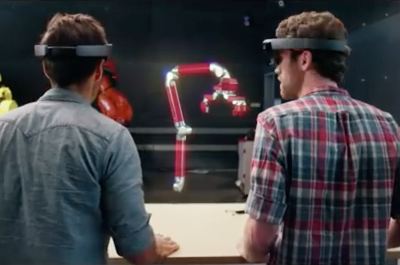 Two employees from ModBot use the HoloLens, and Autodesk 360 design software in an illustration of what it looks like to design a robot, which hangs in the air in front of them. Image source: AutodeskThe suspended design takes on the product’s actual dimensions, which isn’t often possible on a computer screen, he says.

“Something like HoloLens will let you see the actual physical size and in context,” he says.

Harding-Rolls says he expects other engineering and industrial uses will be found for augmented reality devices. And its potential within consumer markets outweighs that of virtual reality, he says.

“VR is a kind of closed environment that has applications within travel or education, but it’s not a solution that allows you to walk around with a headset on and have augmented representations on top of your everyday vision,” he says. “For that reason, you can imagine augmented reality being used in a wider number of industries compared than VR.”

For now, the business and engineering applications for which augmented reality—including holograms—can be used, such as at Modbot—are “relatively lightweight,” Harding-Rolls says.

“The hope is in the future holography and AR will be a bigger opportunity within industry, but we’re still a good few years out from that,” he says. “It’s not an essential technology, but it will become increasingly robust, the use cases will improve and the business applications will become more significant over time.”