Advanced Mine Detection Technology Being Developed

Engineers at the Ruhr-Universität Bochum (RUB) and Technical University Ilmenau are developing an advanced method for humanitarian mine clearance in Colombia based on ground-penetrating radar technology.

Many areas of the country teem with land mines laid by guerrilla forces and members of drug cartels. Because the booby traps were not industrially manufactured, but rather assembled from various everyday objects, they are almost impossible to detect via traditional methods.

To date, the country’s military has been using metal detectors to search for mines. However, they typically contain almost no metal, and there are many other metal objects in the ground. 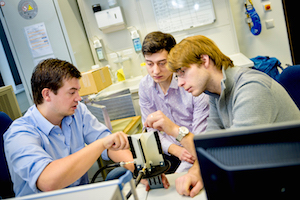 (L-R): Christoph Baer, Jochen Jebramcik and Jan Barowski work on their mine detection system. Image credit: ©RUB/Damian Gorczany.The measurement system they devised comprises an antenna, a radar detector and a positioning system. The radar contains electronic measurement technology that generates signals, and later records, and analyzes them. The antenna transmits the signals generated by the radar. The positioning system continuously monitors the location of the measurement device in relation to the ground.

The researchers then created computer models of real mines and simulated the radar signals that would be generated by each of them—a "radar cross-section." They searched the models for elements that are characteristic of mines, but not for objects such as stones or screws.

A key aspect of the system's detection algorithm is that it knows as many different mine types as possible. For this reason, Barowski and Baer tasked their colleagues and students alike to bring a random container from home and turn it into a mine.

"Had we built all mines ourselves, they would have ended up looking the same,” says Baer. Moreover, new combinations can be created virtually based on the computer-simulated mines, ensuring greater diversity.

Prior to identifying a signal with a specific radar cross-section using ground-penetrating radar, raw data must be processed. “Conducting measurements with our radar is initially like looking through a camera without a lens,” says Barowski. “The optics required for focusing is lacking.” Actually punctual objects look like curved lines. Researchers can convert those lines into point objects using digital signal processing.

The system employs signal processing to remove interferences caused by layers of earth from the images, focus on point objects and compare the properties of the signals with known radar cross-sections of different mine types or other objects. This is how relevant objects can be distinguished from irrelevant ones in the ground. Then, the information supplied by the positioning system is integrated.

The challenge is for the technology to be applied in real time. “The person holding the radar device should see an image instantly,” says Barowski. That means it shouldn’t be necessary to first painstakingly edit data at a computer. The researchers intend to solve this challenge with a field programmable gate array, a piece of hardware that they can adapt to a specific function.

Currently, the engineers are working to optimize the technology for application in a hand-held device. According to their estimates, it will take another two to three years to complete a prototype.

“All mines must be found, because it is a humanitarian project,” says Baer. For this reason, the team will not patent the technology, as it is intended to be made publicly available.

By posting a comment you confirm that you have read and accept our Posting Rules and Terms of Use.
Advertisement
RELATED ARTICLES
Security and defense vendor to produce underwater anti-mine robots for France, the UK
Radar Used to Measure Moisture Levels in Soil and More
Flying Metal Detectors
Team enables cars to 'see' potential hazards lurking around corners
Magnetometer-mounted drones sweep for mines, unexploded bombs
Advertisement