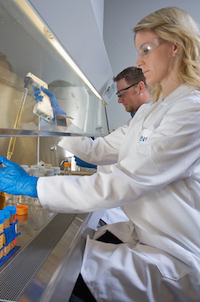 According to Gevo Chief Executive Officer Patrick Gruber, ATJ provides a "cost-competitive path" for commercial airlines to reduce their greenhouse gas footprint and reduce their particulate emissions from combustion.

Isobutanol is a four-carbon alcohol traditionally produced via high-cost petrochemical feedstocks. According to Gevo, the resulting market for isobutanol has historically been limited to markets such as solvents and other specialty chemicals.

Gevo says it has developed a renewable method to produce a 98+%-purity product using sugars from "any available source"—allowing for significantly lower-cost isobutanol production.

By posting a comment you confirm that you have read and accept our Posting Rules and Terms of Use.
Advertisement
RELATED ARTICLES
Cellulosic Jet Fuel for Use on Commercial Flights
Video: a Boost for Ethanol-derived Jet Fuel
New ASTM Standard for Butanol Purity Testing
Airline Uses Renewable Biofuel for Regular Flights
United Airlines Plans to Fly Greener Skies
Advertisement