A drone in every garage? Not quite yet, but the popularity of unmanned air vehicles (UAVs) has reached the point where the U.S. Federal Aviation Administration in 2015 ruled that registration will be required for drones. The FAA estimates that 1.6 million drones were sold in the U.S. alone in 2015, raising concerns about safety and possible interference with commercial aircraft. New registration requirements, which affect drones weighing a half pound to 55 pounds, have won the support of the Air Line Pilots Association.

While much of the drone market consists of hobbyists, demand is growing from UAV operators that range from the military and law enforcement to agriculture and energy providers. A 2015 IHS forecast predicted that the annual global market for combat drones alone would grow from $6.4 billion currently to $10.4 billion in 2024.

What distinguishes the hobbyist’s backyard drones from the sophisticated UAVs targeted for combat and commercial uses? And how will UAV technology –and its applications--change in the years ahead? One company that can shed light on those questions is California-based AeroVironment. Founded by the late Paul McCready, creator of the first human-powered airplane, AeroVironment is a leading supplier of UAVs to the military, and is now expanding into commercial applications. MIT-educated engineer Kirk Flittie, the firm’s VP of Unmanned Aircraft Systems, discusses the potential of UAV technology with Engineering360 contributing editor Larry Maloney.

Maloney: How does a hobbyist’s drone differ from the UAVs that manufacturers like AeroVironment are developing? 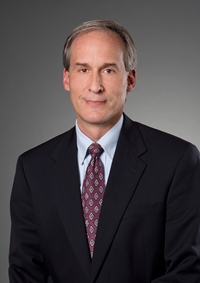 Kirk Flittie, VP of Unmanned Aircraft Systems, AeroVironment Flittie: We’ve had discussions internally about whether we might sometimes refer to our systems as drones, but we always conclude that it really would be a disservice to our unmanned aircraft systems (UAS). Our technology goes well beyond just taking pictures or video. For our military and commercial customers, what we provide is aerial imaging and data analytics that increase the efficiency of their operations. Our focus is on helping our customers gain powerful insights, on demand, so they can make decisions with confidence, whether it’s a crop grower or a frontline combat tactical unit.

Maloney: Who are AeroVironment’s prime customers?

Flittie: We are the largest supplier of unmanned aerial systems to the U.S. government, with more than 85 percent market share of all Department of Defense UAVs, plus more than 30 allied customers. Our small unmanned aircraft have logged more than one million operating hours in the most demanding environments and missions. We have won all five Department of Defense competitions for small UAS production programs and delivered more than 25,000 unmanned aircraft systems.

Maloney: What are some of your principal UAS designs?

Flittie: AeroVironment’s small unmanned aircraft include the RQ-12 Wasp, RQ-11B Raven, RQ-20A Puma and the Shrike vertical takeoff and landing UAS. All four aircraft are back-packable, hand-launched systems that require no infrastructure, such as runways. They range in weight from 2.85 lbs for the Wasp to 13.5 lbs for the Puma. Maximum flight times vary from 50 minutes for the Wasp to as long as 3.5 hours for the Puma. Shrike also provides hover, perch and stare ISR (intelligence, surveillance and reconnaissance) in high-density locations. 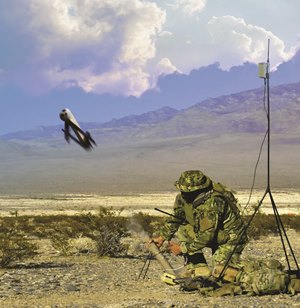 The Switchblade carries a warhead and deploys its wings upon launch. Users operate our systems with a common handheld ground control station (GCS) that provides a communications range of 15 km. This common control architecture lets customers operate all of these platforms, which reduces training time and the amount of equipment to be carried. With the GCS, operators can control an aircraft manually or pre-program it for GPS-based automatic navigation. Besides the control station, AeroVironment offers the “Mantis” suite of gyro-stabilized, gimbaled sensors. These multi-sensor payloads include high-resolution color and infrared thermal video sensors, as well as a laser illuminator – all contained within a compact sphere positioned in the nose of the aircraft.

Maloney: How are customers deploying these aircraft?

Flittie: For the military, our technology has changed the way ground forces operate, giving them instant awareness of their surroundings. For example, we have videos showing how a UAS can detect terrorists planting explosive devices on roads frequented by U.S. or allied vehicles. This same surveillance capability was recently demonstrated in an Arctic search-and-rescue mission.

For commercial applications, we’re focused on remote sensing and data analytics. Our goal is to revolutionize operational decision making in commercial industries the same way we revolutionized tactical reconnaissance for the military. We are targeting applications ranging from monitoring pipelines in the Arctic to providing intelligence for Coast Guard ships breaking ice in the Antarctic.

Flittie: Yes. We’ve developed the Switchblade UAS, an advanced, back-packable tactical missile system. This battery-powered UAS launches from a tube, unfolds its wings and transmits video from color and video sensors to the ground control system. Once the operator identifies a hostile target, the 5.5 lb UAS becomes a weapon, guiding itself to the target and detonating a small warhead with high precision and minimal collateral damage.

We view Switchblade as a rapid response solution to lethal threats and one that has low operational cost and a small footprint in terms of manpower, size, weight and logistics. It can be operated manually or through GPS-enabled automatic navigation.

Since introducing Switchblade, we have been developing a number of versions that are scalable and can be launched from a variety of air, ground and watercraft platforms. They are effective against stationary or moving targets and have a wave-off capability when a mission needs to be aborted.

Maloney: The Defense Advanced Research Projects Agency (DARPA) is funding development of UAVs that are as small as birds or even insects. What are the main technical challenges in designing this class of mini-UAVs? 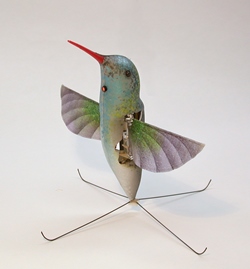 The Nano Hummingbird made the cover of Time magazine’s invention issue in 2011. Flittie: We developed the Nano Hummingbird air vehicle under a DARPA research contract. It is a technology marvel and also a bit of a celebrity, making the cover of Time magazine’s invention issue in 2011. As demonstrated, the Nano Hummingbird measured 6.5 inches and weighed less than an ounce. The primary technical challenges for very small UAS include trade-offs involving size, weight, power and flight duration. To deliver more capabilities in these very small systems, we need to build on advances made in commercial markets for batteries, sensors and materials.

Maloney: At the opposite extreme, your company is developing a large UAV, the Global Observer. What are its capabilities and target applications?

Flittie: Global Observer has a liquid hydrogen propulsion system and a light airframe, which results in extreme flight endurance. Because of its propulsion system, the only emission is water vapor. Able to accommodate multiple sensor and communications payloads, this UAS will operate in the stratosphere, at about 55,000 to 65,000 feet, for up to a week at a time. In effect, it serves as a flexible communications satellite covering an area of up to 600 miles in diameter.

Measuring 70 feet long and with a wingspan of 175 feet, Global Observer is designed to provide affordable communications relay and uninterrupted observation over any spot on the planet. It could be a valuable asset for such missions as disaster and evacuation planning, first response and relief operations, as well as border and coastline monitoring to observe patterns of illegal activity.

Flittie: The opportunities are truly limitless. Real regulatory issues and other factors need to be resolved, and that may still take some time. But once these challenges are worked out, the benefits of unmanned aircraft systems will really come to the forefront. We’re not ready to put a number on it yet, but we see the various reports from analysts about the overall potential reaching into the billions of dollars.

In 30 years, we will need to feed two billion more people, and UAS deployments can help achieve that. Many lives also are going to be saved where a UAS can inspect critical infrastructure or provide reconnaissance that spares police officers and other public safety personnel from entering dangerous areas. These benefits will increase exponentially in the years ahead.

By posting a comment you confirm that you have read and accept our Posting Rules and Terms of Use.
Advertisement
RELATED ARTICLES
Video: What Happens When a Drone Collides with an Airplane?
Video: U.S. Army Orders Suicidal Drone Killers
FAA Finalizes First Operational Rules for Commercial Drones
FAA to Test Drone Detection System at Selected U.S. Airports
DOT and FAA Propose Rules for Small Unmanned Drone Aircraft
Advertisement