Although strides have been made in the development of artificial organs, realizing a network of channels that allow fluids to flow through the system and that mimick the natural capillary system remains a challenge. In bottom-up approaches, cells cultured in a thin slab of gel begin creating capillaries after some time. This process can take weeks for the cells to create such a network, resulting in cell die-off. 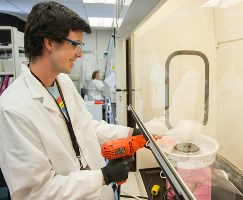 The cotton-candy spinning method can produce channels ranging from 3-55 microns, with a mean diameter of 35 microns. “So far the other top-down approaches have only managed to create networks with microchannels larger than 100 microns, about ten times the size of capillaries,” says Leon Bellan, assistant professor of mechanical engineering. In addition, other techniques are not able to form networks as complex as the cotton candy approach.

Electrospinning can make networks somewhat resembling capillaries, but at a smaller scale. Bellan bought a cotton candy machine for about $40, and it formed threads that were about one-tenth the diameter of a human hair – roughly the same size as capillaries – so they could be used to make channel structures in other materials.

However, getting from that point to creating artificial capillaries that work was not a simple matter. If you create a network of fibers using sugar, when you pour a hydrogel on it, the sugar dissolves away because the hydrogel is mostly water, he says.

This illustrates what Bellan describes as the “Catch-22” in creating such sacrificial structures. “First, the material has to be insoluble in water when you make the mold so it doesn’t dissolve when you pour the gel. Then it must dissolve in water to create the microchannels because cells will only grow in aqueous environments,” he says.

The researchers experimented with a number of different materials before they discovered one that worked. The key material is PNIPAM, Poly (N-isopropylacrylamide), a polymer which is insoluble at temperatures above 32 C and soluble below that temperature. In addition, the material has been used in other medical applications and has proven to be cell-friendly.

In the procedure, the researchers first spin out a network of PNIPAM threads then mix a solution of gelatin in water (a liquid at 37 C) and add human cells. Adding transglutaminase, an enzyme commonly used in the food industry, causes the gelatin to irreversibly gel. This warm mixture is poured over the PNIPAM structure and allowed to gel in an incubator at 37 C. Finally, the gel containing cells and fibers is removed from the incubator and allowed to cool to room temperature, at which point the embedded fibers dissolve leaving a network of microscale channels. The researchers then attach pumps to the network and begin perfusing them with cell culture media containing necessary chemicals and oxygen.

“Our experiments show that, after seven days, 90% of the cells in a scaffold with perfused microchannels remained alive and functional compared to only 60–70% in scaffolds that were not perfused or did not have microchannels,” Bellan says.

Bellan and his team now will fine-tune the process to match the characteristics of the small vessel networks in different types of tissues and will explore a variety of cell types.