Salt is commonly applied to snow-covered roads to transform ice into slush by depressing the freezing point of water. This cooling principle was applied by U.S. Lawrence Berkeley National Laboratory researchers in the design of a new ionocaloric refrigeration cycle.

Cooling is achieved by mixing sodium iodide (NaI) salt and an ethylene carbonate (EC) solvent. Repeatedly removing and adding the salt keeps the cooling cycle going. The idea behind this ionocaloric refrigeration is to exploit the large temperature change — and therefore the large heat absorption — obtained by melting a “special ice” when put in contact with a specific salt. The cooling process is reversible to achieve an efficient cycle with potential wide applications in refrigeration. 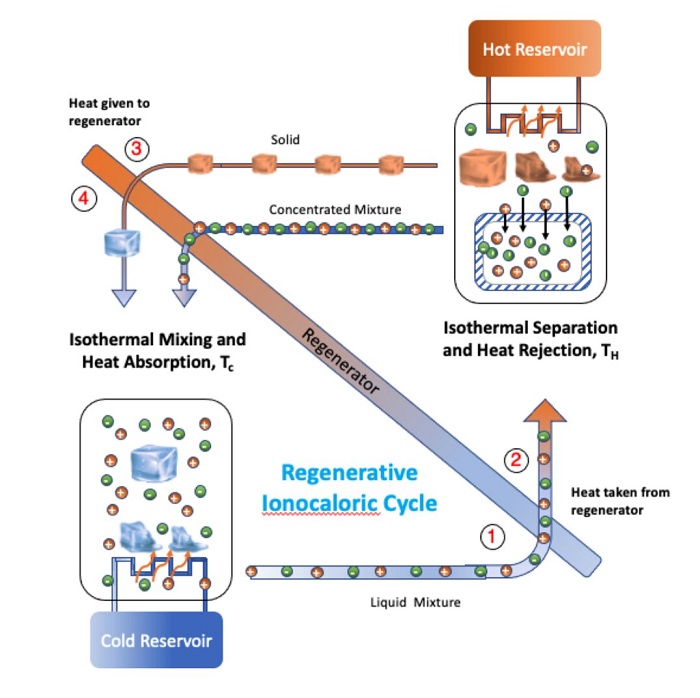 The researchers incorporated a mixing device inside of a box to dispense NaI and EC as well as an electrodialysis component to remove the salt. Testing confirmed that this refrigerator maintained a cool temperature and that it was approximately as efficient as refrigerators now on the market. The system does not emit any hydrofluorocarbons or other pollutants. They acknowledge that it does have one drawback — it takes quite a while for the mixed solution to cool.

The research is published in the journal Science.

By posting a comment you confirm that you have read and accept our Posting Rules and Terms of Use.
Advertisement
RELATED ARTICLES
Passive solar cooling with a few grains of salt
Transcritical use of carbon dioxide refrigerant
Barocal secures $1.7 m funding for pioneering approach to “zero-carbon” refrigeration
The technology, benefits and applications of the Demandside Arctic Gator Cooling Systems
Keeping the Large Hadron Collider cool with CO2 refrigeration
Advertisement