A team of researchers from Canada’s Concordia University has developed a paper-based synthetic biosensor that can be used to detect rotting meat.

The biosensor, according to the researchers, identifies the presence of the toxin putrescine — which, as the name implies, is largely responsible for the foul odor of putrefying meat — in beef. Consumed in large quantities, putrescine can lead to vomiting, diarrhea, headaches and more. 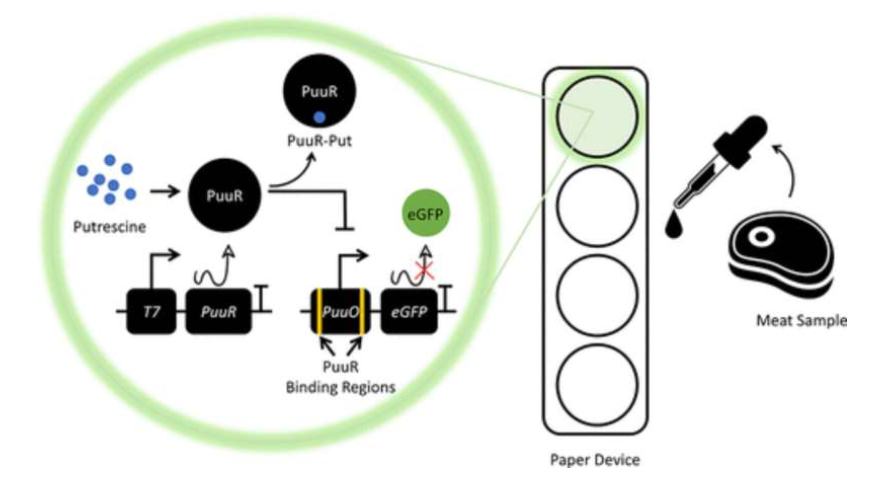 To develop the biosensor, the researchers relied on cell-free protein synthesis, which manufactures a protein via the biological machinery of a cell without using the actual living cell. As such, the team determined that the putrescine repressor protein PuuR — which is found in E. coli bacteria — can reportedly point to the presence of putrescine.

During testing, putrescine was added to the system producing the repressor in a solution. The team then placed the solution on a paper device to determine if traces of the putrescine were visible under ultraviolet (UV) light. After one hour, the biosensor detected the presence of putrescine.

Actual meat samples were then tested by comparing small portions of beef stored in a freezer, a refrigerator and at room temperature to gauge the amount of putrescine that accumulated over several days.

These findings were then compared to those arrived at via high-tech chromatography commonly used in food inspection applications, further confirming the accuracy of the biosensor.

The biosensor is detailed in the article, A Synthetic Biosensor for Detecting Putrescine in Beef Samples, which appears in the journal ACS Applied Bio Materials.

By posting a comment you confirm that you have read and accept our Posting Rules and Terms of Use.
Advertisement
RELATED ARTICLES
Biosensor Can Detect the Presence of Horse Meat in Beef
Startup 3D printing slabs of plant-based beef
Graphene biosensor platform speeds COVID-19 diagnosis
Engineering technology to thwart foodborne illnesses
Process could pave the way for rapid detection of gluten in food
Advertisement