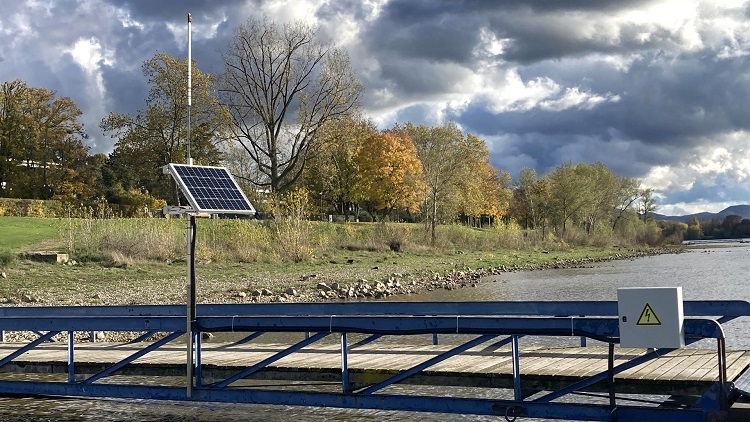 The water level sensor can be powered by solar cells. Source: Makan Karegar/University of Bonn

Available riverine water level sensors deployed to warn of floods can be damaged during flood events, are difficult to read remotely and do not provide continuous measurements. These limitations are overcome with a low cost, robust and reliable sensor engineered by researchers from the University of Bonn (Germany) and Federal University of Rio Grande do Sul (Brazil).

Placed adjacent to a river and out of the water, the sensor sports an antenna connected to a Raspberry Pi microcomputer and continuously receives GPS and Global Navigation Satellite System signals. Part of each signal is received directly from the satellite, while the rest is captured indirectly after it is reflected off the river's surface. When superimposed on the directly received signal, the resulting interference patterns can be used to calculate the distance between the antenna and the water level.

The low-cost antenna and receiver sensor described in Water Resources Research is capable of continuously transmitting the water level to an evaluation center via mobile communication. The device can transmit its data via mobile network and be powered by solar panels to form a stand-alone unit. System reliability has been demonstrated during two years of testing on the Lower Rhine River in Germany and is deemed suitable for providing a densely distributed network for flood and drought warning systems.

Access the open-source code and the plans for the device, which is currently limited to use on rivers that are at least 40 m (131 ft) wide.