Answering the air hammering challenge: A test case for innovation

Innovation is essential to the ongoing evolution of industry, and it can be driven from many corners: original equipment manufacturers (OEMs) daring to try something new, end users adapting and modifying products to better serve their individual needs, business analysts identifying obstacles that call for creative solutions. Sometimes a small but critical link in the chain that connects makers to customers can recognize an opportunity to develop answers where no one has thought before to ask questions — in areas where the familiar refrain, “We’ve always done it this way” has resonated louder than the realization that there might be improved alternatives.

An example of this can be seen in the problem-solving work done by rotating union and rotary joint manufacturer Deublin on horizontal directional drilling machines. Horizontal directional drilling is a common practice used by municipalities and contractors for trenchless underground installation of utilities such as pipe, conduit and cabling. The practice has taken on increased importance as greater numbers of lines that were traditionally run overhead have moved underground. Power and energy transmission lines have been relocated, and drilling has gone both farther and deeper to lay down the fiber-optic infrastructure that supports 5G networking.

One challenge inherent to the process comes from geological parameters, which vary by area.

In the northern U.S., for instance, horizontal directional drilling is relatively straightforward. More sand and fewer rocks in the region are easier to cut through, and the use of fluid-based media creates a mud mixture that supports the drilling process. The fluid helps to clean out the hole as it gets drilled, sending cuttings back to the surface. It also provides structure around the hole as it dries and serves to cool the drill bit.

By contrast, drilling in the southeastern part of the country is more challenging due to the prevalence of rock layers beneath the clay soils commonly found at the surface. Cutting through the large areas of rock requires a switch from fluid-based media to compressed air — a process known as air hammering. This mode of operation sends compressed air down the drill’s pressurized internal diameter (ID) cavity, which returns to the surface by way of the outer diameter (OD). It can be imagined as putting the drilling machine into “jackhammer mode,” and it requires the rotary union inside the drill to “run dry” as it cycles air at high frequency under high pressure.

When a customer reported to Deublin that its rotary unions were not able to achieve more than 10 hours of service life when air hammering, the company saw an opportunity to innovate. Deublin surveyed other customers to establish an understanding of their service life expectations and performed lab testing to confirm those estimates. In addition to verifying the 10-hour maximum, the company found that average mechanical seal life was even lower, clocking in at just two to five operating hours. Notably, this fact was generally viewed as an insurmountable limitation that simply had to be accepted. The company’s research and development arm went into problem-solving mode with the intention of surpassing those expectations. The first thing Deublin considered was how the seals for its union could be designed around various factors, including the type of media being processed and the amount of media compression necessary for reliable operation. Requirements vary widely based on the type of media being used, whether that is hydraulic oil, water or – as in the case at hand – air. At the same time, it was important to consider the amount of fluid that “weeps” as part of the normal operation of the system. This fluid, also known as bypass flow, passes across seal faces and provides lubrication. In the case of air, bypass flow is minimal.

The combination of these factors dictates the types of seal materials that can be used. Fluid-based directional drilling can employ harder materials such as silicon carbide (SiC) ceramics; these can withstand seal degradation caused by the silica contained in sand but also require frequent lubrication, which is provided by bypass flow. Air applications typically employ softer seal materials such as carbon graphite, a material similar to the “lead” used in pencils. These seals may be self-lubricating or require infrequent lubrication with small amounts of oil; the carbon graphite material itself imparts a lubricity to the seal that supports dry running.

The challenge presented by air hammering is essentially that it needs to draw from the best of both of those worlds. Silicon carbide seals require lubrication that the air process does not provide; carbon graphite seals, which are self-lubricating, are too soft to withstand a process that involves pressures around 2,000 PSI. In real-world applications, moreover, the drill will need to be switched between fluid and air processes depending upon the terrain. The bottom line is that there is no “one-size-fits-all” seal design that can accommodate the variations in media.

Deublin’s innovative solution was to create a union design that could employ silicon carbide seal materials that are automatically lubricated during operation. Leveraging the fact that each section of pipe drilled involves a connection to the drill machine, the Deublin team reasoned that, along with generated heat, the zero-pressure condition produced when that connection was broken would force lubricant stored in the pressurized internal cavity of the system onto the seal faces. In theory, the resulting self-lubricating design would extend the product’s life during air hammering. 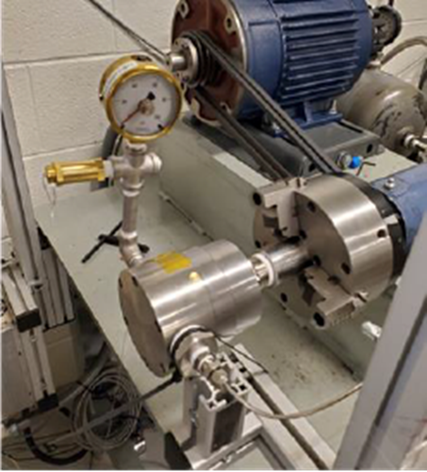 To put this theory to the test, Deublin planned design trials in phases. In the lab, Deublin replicated most real-world parameters, then built its test to exceed those conditions. The drill, for example, runs 50 to 100 RPM under real-world conditions, with a 280 RPM max rating. During testing, the unions were set up on a spindle to continuously run for eight hours per day — the length of a standard work period — at the maximum rate of 280 RPM. Inlet pressure was set to 100 PSI with spikes approximately once per second, up to a maximum 350 PSI; under real-world conditions, a compressor runs between 275 PSI and 380 PSI. No regreasing or maintenance was allowed during testing.

The results significantly surpassed those figures. Two prototype unions were run under extreme conditions for over 100 hours, and a linear seal life calculation was used to adjust the resulting data for real-world conditions. Considering multiple operating parameters to produce a relatable data point, the calculation projected a seal life of 500 to 1,000 operating hours. In other words: a game changer.

Phase two of testing began with rebuilding the prototypes for field testing, then shipping them to the customer for full validation. This phase is currently in progress.

The prototype union that Deublin created is designed to function with water-based mud or to run dry, allowing it to be used in field conditions requiring media switching. It is also designed as a drop-in replacement component; no additional ancillary components are needed for installation.

As an innovation, Deublin’s response to the air-hammering challenge is particularly remarkable because it originated with a small supplier to an industry willing to accept the status quo, despite its obvious inefficiency. By looking deeper into the engineering possibilities, the company created a customized solution that may become an operational standard with wide acceptance. In short, it solved a long-standing problem previously thought to be unsolvable.

This is just one example of the innovative spirit that characterizes Deublin’s approach to challenges. To learn more, visit Deublin's website. 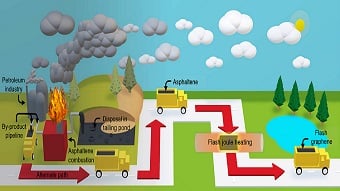