A mounting volume of film plastic waste produced at apartment building construction sites in Finland is destined for landfills or incinerators. Concern about the attendant environmental implications spurred Aalto University researchers to develop a tool to quantify the plastic waste generated at different construction stages. Site managers can use this information to better plan for recycling services.

The modeling tool was based on activities conducted at three concrete building sites and at one wooden block of flats that served as a benchmark. Separate collection of film plastic waste was performed, and the emptying times of collection bins and the weight of the waste were recorded. The amount of colored 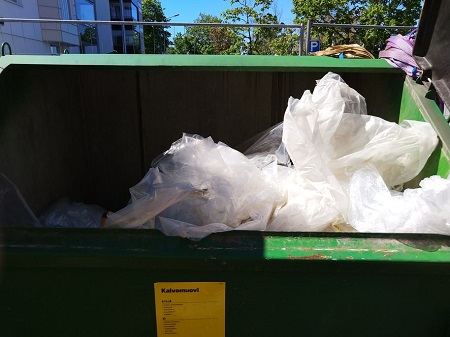 In concrete element buildings, the average amount of film plastic waste was 0.33 kg/gross square, or 26.2 kg per apartment. The wooden block of flats produced 3.4 times more film plastic waste than the concrete site, due to the use of plastic film to protect exterior wall elements during transport. Dirty and colored film plastic, the presence of which may pose obstacles to recycling, accounted for an estimated 15% to 30% of the total amount.

Based on these findings, the researchers developed a modeling tool — available here, in Finnish — that allows the developer or the main contractor to assess in advance how much film plastic waste is generated and at what stages of construction. This means that the correct number of recycling bins is available in the right places, at the right time. Film plastic waste is most produced during the indoor manufacturing phase, especially from furniture, windows and doors, tiling, ceilings and for covering.