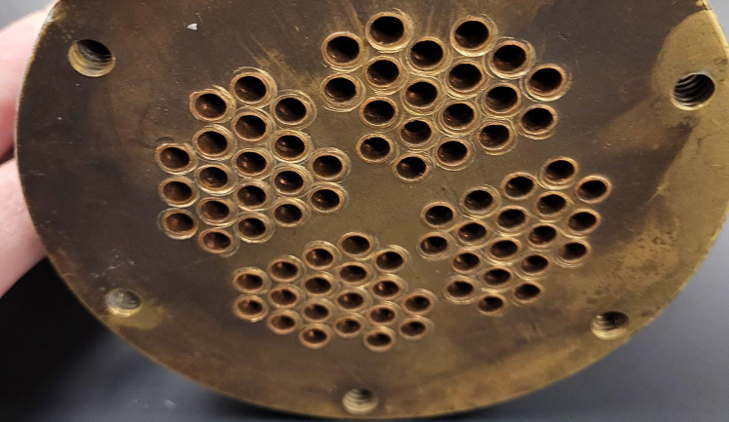 Heat exchangers heat or cool process fluids on the industrial scale. While there are several major types of heat exchangers, they typically have a few common safety hazards, all of which can be addressed through instrumentation. While this list is generic toward all heat exchangers, it can hopefully get the conversation started around heat exchanger safety and help engineers to identify hazards in their own systems. Many of these tips will also help ensure optimal heat exchanger operation.

Perhaps the most important reason for keeping temperature in bounds is to prevent dangerous phase changes. While some heat exchangers are specifically designed for phase changes, many are not. For example, if the temperature climbs high enough to boil cooling water and turn it into steam, this will cause the pressure to rise rapidly. If the system is not designed for these high pressures, the results can be catastrophic.

These phase changes can occur in mixtures, where one material boils off or freezes before another. At industrial scales, a cooling liquid that claims to be water free may have a few parts per million of water. The water may separate out and freeze, which may not sound like a big deal, but if the facility processes 300 million gallons of this substance a year, it adds up quickly.

It is worth noting that many refrigeration systems rely on boiling coolant to absorb waste heat, and these are built to withstand this phase change.

To detect phase change issues, a combination of temperature, flow and pressure monitoring must be performed. Adequate temperature monitoring will alert operators before the phase change occurs. Flow measurements can detect freezing by monitoring the flow rate before and after the heat exchanger. If the coolant is freezing in the heat exchanger, it will show up as a differential flow between the entrance and exit. Finally, pressure monitoring can detect boiling, but this should be thought of as the last layer of protection.

The problem with phase change excursions is how to deal with the chemicals in use, which will depend on the specific application. For example, water in danger of boiling can be relieved with a well-placed, appropriately-sized pressure relief valve. Flammable liquids that begin to boil should be sent to the flare instead of released into the open air.

In some cases, the chemical composition can be measured using any number of characterization techniques at sample ports before and after the heat exchanger. The composition of the material should not change as it runs through the heat exchanger; if it does, it might mean separation of a mixture.

A high pressure excursion in a heat exchanger can be catastrophic, such as the Williams Olefins Plant. In this case, the heat exchanger ended up becoming isolated from its overpressure relief valve due to a design change that had not been properly vetted.

Low pressure can also be a problem if a pump is being used to pull the process fluid through the heat exchanger. Besides using a pressure gauge, the pump can be monitored for vibration or current draw. If the flow becomes restricted, the pump may draw more current. This can be detected by measuring current directly, measuring voltage drop across a shunt resistor, or indirectly with a proper selection of fuses or breakers. Also, the low flow can lead to cavitation on the input side of the pump. This can be monitored audibly or by using accelerometers to measure vibration signals.

How might a heat exchanger flow be restricted or blocked? The process fluids can corrode the surfaces they touch, leading to rust build up or scaling that can reduce the diameter of the tubes and restrict flow. Also, impurities in the process fluid can build up in low-velocity areas of the heat exchanger. For example, water that is being pumped from a nearby lake may have a small amount of sand and leaves, or a small amount of resin that is more dense and less viscous could collect in these areas as well.

The most effective prevention methods are to add filtering and purification of the process fluids. This will not capture all of the impurities, but it will reduce them, provided changing filters is added to the maintenance schedule.

When water is used, the measurement of the total dissolved solids (TDS) and pH can give an indication of the propensity for corrosion. If a record of TDS is kept over time, changes in water chemistry can be detected, which can indicate corrosion.

To mitigate corrosion, sometimes sacrificial anodes are placed in strategic locations. Often, these are a bolt with a plug of magnesium, zinc or another more electronegative metal. This can be easily forgotten, as it appears as a bolt head on the outside of the heat exchanger, but it must be checked and periodically replaced.

Leaks can occur due to corrosion, mechanical damage, overpressure and other such conditions. 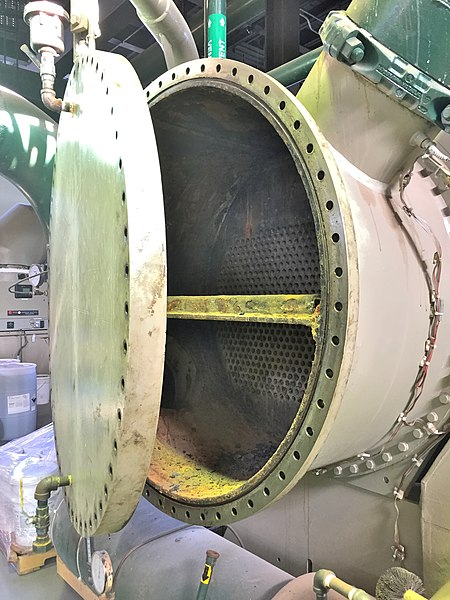 A leak between the tubes and the shell would be difficult to detect. Source: Saud/CC BY-SA 4.0Leaks between the shell and the outside can often be spotted visibly, using periodic inspection or chemical “sniffers” for some chemicals. Acoustic sensors can be used to detect leaking vapor phase, such as steam, as the escaping vapor sounds different from the heat exchanger under normal operations. Shell leaks with a large temperature difference can be detected with thermal cameras as well.

Leaks between the inner surfaces can be much harder to detect, but very important to find. The two process fluids should not mix, and so a leak between the tube side and shell side in a shell and tube heat exchanger is not permissible. In the worst circumstances, these two fluids may react. At the very least, both process fluid streams will be contaminated. Worse than that, the leak may be difficult to detect.

This list of issues is not exhaustive. The safest practice for evaluating heat exchanger surety is to start by performing a full Process Hazard Analysis (PHA) on the heat exchanger system, where all potential hazards are identified. This PHA should include engineers and both maintenance and operations technicians who are responsible for the system. Once all the hazards have been identified, appropriate instrumentation, Standard Operating Procedures (SOPs), Preventive Maintenance (PM) schedules and other safety and quality systems can be implemented.