This isn’t another article about wearing safety glasses. Process safety is a much bigger topic than personal safety, and errors in process safety often impact more than one individual. When process safety goes awry, the incident makes the nightly or even national news, and the surrounding communities can feel the impact. Multinational corporations, such as Union Carbide, may never recover from the incident, and unfortunately, many lives are often lost due to these mistakes.

What is process safety? It is a close examination of a manufacturing process to ensure that there is little chance of fire, explosion, overpressure, underpressure, chemical release or any other unintended consequence of the manufacturing process. In general, process safety is about controlling hazardous energies, which means keeping chemicals in the pipes, electricity in the wires, flames in the firebox and people out of the way of machines.

Therein lies the main difference between chemists and chemical engineers. While a chemist may experiment and make 200 ml of a new chemical, and feel the bottom of the beaker get a little warm, the chemical engineer must figure out how to make 300 gal/hr of this chemical, manage the heat generated and deal with the fact that equipment wears out and must be maintained and replaced without creating unsafe situations. Process safety is part of the scaleup. Similar comparisons can be made between the robotics scientist and the manufacturing engineer, the artist in a small foundry and the materials engineer in a steel mill, and virtually any other engineering discipline.

Hazard identification is its own specialized field in process safety. For now, it is worth talking about the mindset and technique that go into evaluating how to mitigate hazards in the most effective ways. There are two common models used to explain hazard prevention and mitigation: the Hierarchy of Controls Triangle and the Swiss Cheese Model. 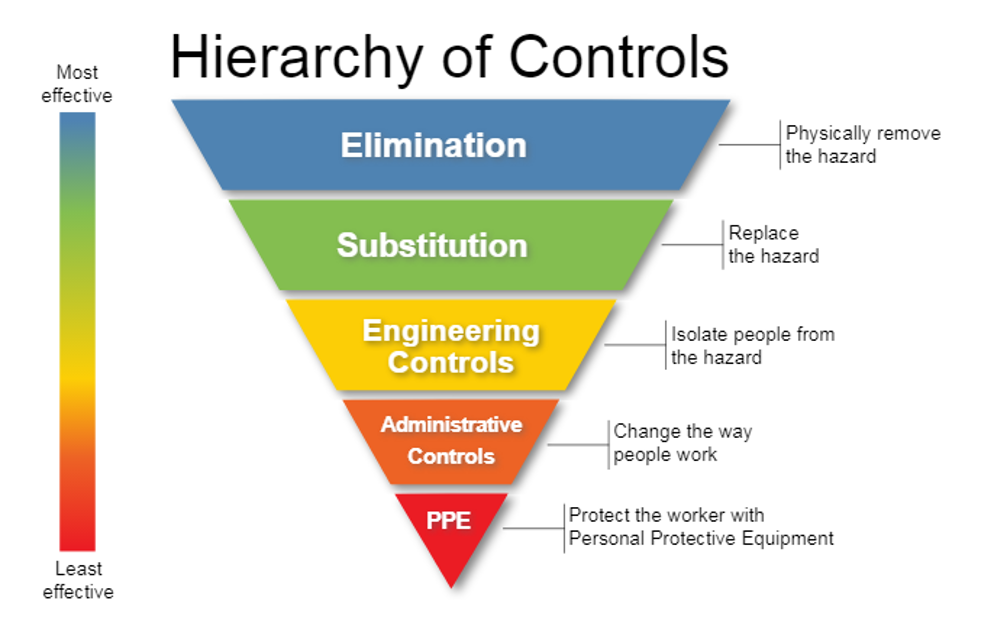 Unfortunately, many laboratory classes in high school and college appear to operate in the bottom two pieces of the triangle: rules (administrative controls) and personal protective equipment (PPE). However, real process safety is happening in the background. For example, a high school or freshman college laboratory contains very few really dangerous substances. They have been eliminated completely, or a less-hazardous chemical is substituted. From there, the chemicals are often kept in a locked stockroom, preventing unauthorized access, and used under a fume hood, both of which are considered engineering controls. Finally, rules of operation and PPE are implemented, and perhaps that is all the average student sees.

Outside of the classroom laboratory, any manufacturing process can benefit from these steps. If there is a particularly hazardous step, if it can be eliminated entirely, it will be much safer. Perhaps it can’t be eliminated entirely, but a similar, much safer step can be implemented instead. Engineering controls may be as simple as well-placed machine guards or as complex as an automation system that performs the most dangerous tasks. From there, training programs, standard operating procedures (SOPs), preventive maintenance and other such initiatives make up the administrative controls.

Swiss cheese is known for having a seemingly random pattern of holes in it, where gas built up during its manufacture. Each slice of cheese will have a slightly different arrangement of holes. A person can see clearly through one single slice of Swiss cheese, but the more slices that are piled up, the less light passes through it. This is because each piece of cheese has holes in different areas.

So it is with hazard prevention and mitigation techniques. Each layer of protection still has some potential flaws of varying sizes and places. The more layers of protection, the more each layer covers some of the flaws from the previous layer. For example, suppose a facility has a fantastic PPE compliance record, maybe 99.6% of employees use the correct PPE all of the time. There is a “hole” in this layer occupying 0.4% of the Swiss cheese. Now, combine this layer with swipe badge access to the most dangerous chemical areas (engineering controls), that works 95% of the time. Perhaps now the threat is significantly smaller — but there is still the chance that the employee not wearing the proper PPE gets let into the secure area, as a kind employee holds the door for them. 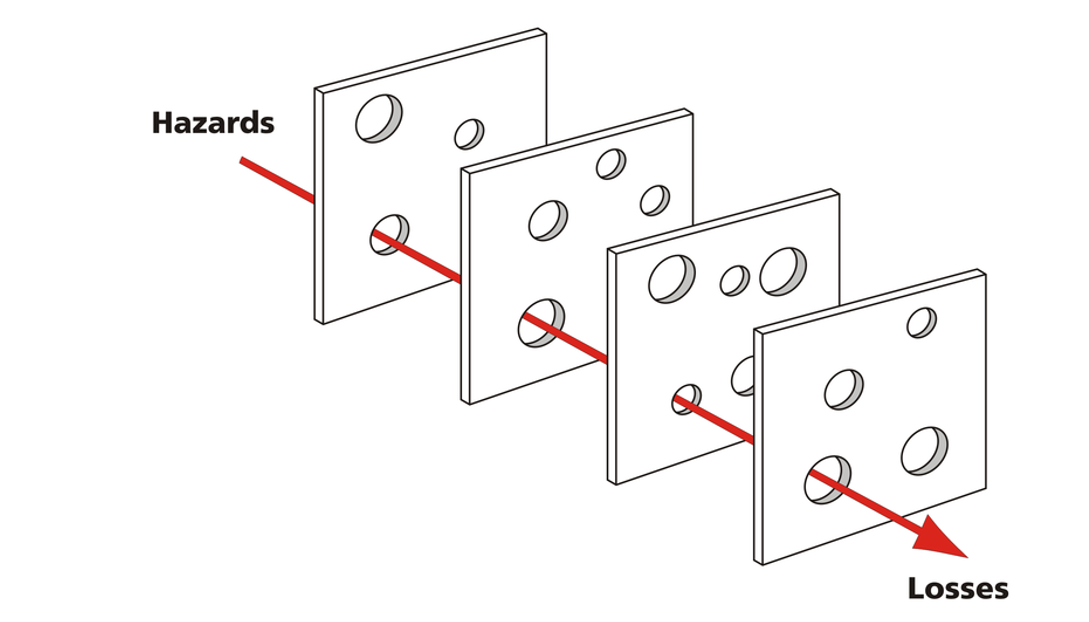 Some layers are preventive, such as wearing PPE, placing machine guards and substituting dangerous chemicals. They are in place and functioning before any process excursion occurs. There are also mitigating layers designed to reduce the impact of a process excursion, such as blast doors, pressure relief valves, emergency procedures and sending chemical releases to the flare.

The Swiss cheese model is a good starting point. However, in real industry, each layer of “cheese,” or each layer of protection would have holes that change size and location, depending on what is happening. Equipment goes down for maintenance, supply lines are disrupted and a new vendor with slightly different feedstock is chosen, and so on. Each of these can be thought of as moving these holes and changing their sizes. Therefore, process safety is a moving target, and each change must be evaluated.

This is barely touching the surface of the whole topic of process safety. However, it is a good starting point for those who are working in a manufacturing industry, or are considering such a career.

By posting a comment you confirm that you have read and accept our Posting Rules and Terms of Use.
Advertisement
RELATED ARTICLES
New processing line for white cheese products
Sounds good? Your next cheese could come with its own playlist
Scientists trying to send mac and cheese to Mars
Dairy research lab aims to create more efficient cheese production
Gel fills holes in tooth enamel
Advertisement