Researchers from the University of Western Ontario have created a nanoparticle-free ink usable in a ballpoint pen for fast fabrication of highly conductive stretchable circuits. The technology allows students and professionals to draw working circuits on paper, plastic or textiles. 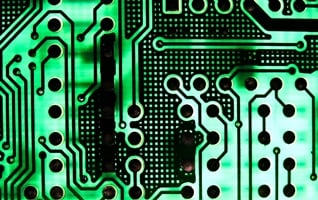 The ink allows users to draw working circuits on paper, plastic or textiles. Image credit: Morguefile.com. The researchers, led by Jun Yang, of the Department of Mechanical & Materials Engineering, created the ink by dissolving silver trifluoroacetate and styrene-isoprene-styrene (SIS), a rubber adhesive, into butanone. A small amount of the high-boiling-point solvent dimethylacetamide (DMAc) was then added to improve the ink’s fluidity and prevent the penpoint from clogging, a problem that keeps the silver-nanoparticle-based inks from being used in pens.

A ballpoint pen then was filled with the ink and circuits were traced by writing on different substrates. To prepare stretchable circuits, a bendable SIS substrate was prepared by depositing an SIS chloroform solution on an aluminum dish and then peeling off the film after drying. SIS films were cut into shapes for subsequent use.

To write complicated circuits, patterns were first printed on paper and transparent SIS films were then used to cover the printed patterns. The patterns then were copied onto the SIS films by handwriting using a ballpoint pen filled with silver ink. The written traces then were reduced by a solution of formaldehyde and sodium hydroxide for five minutes. Repeated writing-reduction cycles were found to enhance circuit conductivity.

To test their method, the researchers designed a heart-like circuit. Fourteen LED lights were installed on an elastomeric SIS substrate and connected into a parallel circuit. The demonstration proved the circuit's ability to endure various deformations, such as bending, stretching and twisting without affecting the lights' performance.

The researchers have launched a startup, Nectro, to commercialize the ink and related pen technologies.