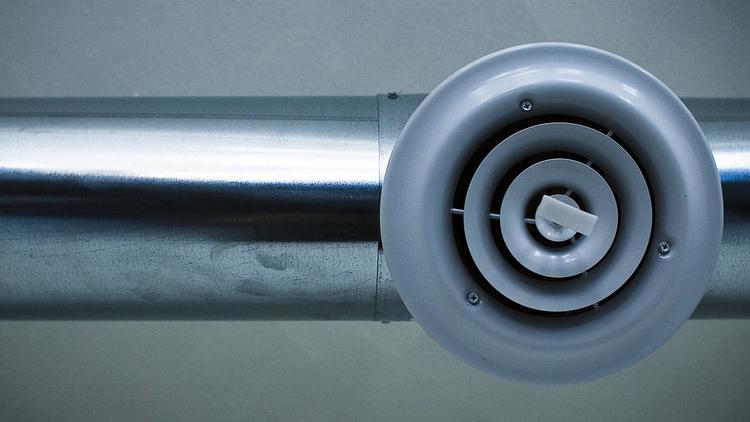 The standard approach to HVAC has adapted significantly over time, as both society’s needs and concerns shift. Air quality and energy efficiency have often been seen as mutually exclusive, with a happy medium being nonexistent. From our ancestors needing ventilation in order to bring fire into caves, to buildings built as tight as possible, in the 1970s to keep operating costs low during an energy crisis, building architects and engineers seem to be good at changing their minds when it comes to optimal heating and ventilation strategies.

As technology and expertise have improved, HVAC designers learned there were better ways to implement HVAC into environments, keeping both energy and air quality in mind. Outdoor air is incredibly important for ventilation. By providing clean, fresh air to a space, CO2, VOCs, particulate matter, and more are diluted while fresh oxygen is added to the building. (If you’ve ever been in a stuffy conference room for a few hours, you can appreciate the need for better ventilation.)

If better ventilation in the form of conditioned outdoor air is the way to go, why do buildings have return air at all? As with many things, it comes down to cost. Cooling return air down from 75°F to 73°F and slightly drying it is much cheaper than taking hot, humid 90°F in and cooling it down to the same conditions. In addition, the weather outside is constantly changing, but the desired conditions inside the building don’t change nearly as much. To be able to adapt to a wide array of conditions, equipment that solely treats outdoor air is expensive and more complicated. Balancing the need for (and often requirement) for better air with minimizing energy usage can be difficult. That’s where demand control ventilation (DCV) comes in.

Traditionally, ventilation rates have been set based on the intended use of that space. Office spaces and conference rooms would set the minimum ventilation rate for a space based off of max occupancy. However, those spaces are only at maximum occupancy some of the time.

While great for air quality, over-ventilating a space is expensive. Due to the increased expense, it is not uncommon to find buildings that have been in service for a few years where the ventilation rate has been reduced by the maintenance staff in an effort to reduce energy cost. The energy bill may be lower but the space is then unacceptable for its intended use. So how do building owners balance safe air quality with reduced energy costs?

DCV simply controls the rate of ventilation based on the demand from the space. What this means in practical terms is that in the space being controlled, some source of information is used to set the outdoor air flow rate dynamically. Some of the most common information sources are:

The next step up from occupancy schedules is occupancy sensors. These sensors range from proximity sensors to people counters and are effective at determining if people are in a space. Occupancy sensors will adjust the outdoor air exchange and air heating or cooling, based on the estimated needs of the people in the space. This isn't very helpful for high traffic areas, where occupancy can very greatly in a short interval. The system will constantly be trying to fine tune the HVAC rates, but ultimately will leave the space under or over ventilated.

Finally we get to carbon dioxide sensors. CO2 sensors are the most widely used manifestation of DCV. People generally respire about the same amount of CO2, and the amount in a monitored space fluctuates based on number of people, amount if respiration and ventilation. This value is also affected by odors and contaminants, and in the era of COVID-19, this is an adequate means to understand how much of the ambient environment potentially contains respired aerosols. In short, it is an effective way to measure 'dirty' air within a vicinity.

Using carbon dioxide sensors mounted on the walls in a space or in a system’s return ducts give much better insight into how space is being used. As the CO2 in the space increases, the HVAC equipment taking the sensor measurements responds by increasing the rate of outdoor air. Now, the intended use of the space is much less important because the system can tune itself to meet the actual needs of the space.

What is the perfect ventilation rate?

Much debate surrounds what level of ventilation is necessary and what is optimal for a given space. Minimum outdoor air flow rates tend to be easier to define. ASHRAE standard 62.1 lays out a base level that is incorporated in to many local building codes.

The levels in between maximum and minimum are harder to define. When looking at carbon dioxide, 1,000 ppm is often cited as a good level to try to stay under. Lower than 600 ppm is typically considered to be over-ventilated. Because the level of CO2 in the outdoor air can fluctuate as well, a slightly better setpoint is a 600-700 ppm differential between the indoor and outdoor air. Whether the setpoint is 700 or 1,100, using CO2 measurement to control ventilation improves air quality while saving energy and money.

DCV brings benefits to a building’s air quality and energy bill, but only when implemented successfully. When adjusting outdoor air flow rates, keep building pressure in mind. If the outdoor air flow rate falls below the total exhaust flow rate from the building (from bathroom fans, kitchen hoods, etc.) the building pressure can become negative making it hard to keep the space conditioned.

Careful sensor placement is another important aspect. Many hours have been wasted trying to tune a seemingly crazy piece of equipment just to find out that the carbon dioxide sensor was placed too close to an outside door. Every time the door opens, the fresh air reduces the amount of carbon dioxide in the air being sampled, greatly changing the equipment’s response.

Remember to calibrate your carbon dioxide sensors too. Over time, CO2 sensors naturally drift and can distort the sensor measurement. Some newer sensors come equipped with an auto calibration feature so it’s important to know what kind you have.

When air quality and energy usage are both important, demand control ventilation provides a clear path for implementation. Following best practices not only ensures a smooth commissioning but also keeps people safe and energy bills in check for many years to come.

By posting a comment you confirm that you have read and accept our Posting Rules and Terms of Use.
Advertisement
RELATED ARTICLES
New tool measures ventilation and indoor air quality
UBS Arena at Belmont Park sets the safety and sanitation standard for future arenas
Study: Poor room ventilation increases potential exposure to contaminants
Big Buildings More Likely to Use Lighting Strategies: Report
Lighten the Load and Save Energy
Advertisement