Solar panel orientation is vitally important for its optimal performance. A general rule-of-thumb for a south facing solar panel is that it must have a tilt angle the same as its altitude to achieve maximum insolation incidence on the panel. While this guideline works well in practice, research has shown that other orientations may be more appropriate, depending on the location, to achieve optimal insolation incidence. A new model developed based on historic climatic data has been developed to improve the accuracy and efficiency of solar panel orientation.

The Climactic Data-Driven Optimization Platform developed by Manhattan College researchers is based on hourly climatic data covering a 20-year span collected by the U.S. National Renewable Energy Laboratory. In contrast to existing analytical methods, this approach eliminates the need to evaluate the extraterrestrial insolation, clearness index and geometric factors. The new modeling scheme is therefore much simpler and efficient in determining optimum solar panel orientation based on desirable objectives, such as maximum annual power delivered by photovoltaic panels or responding to peak demand at certain times. 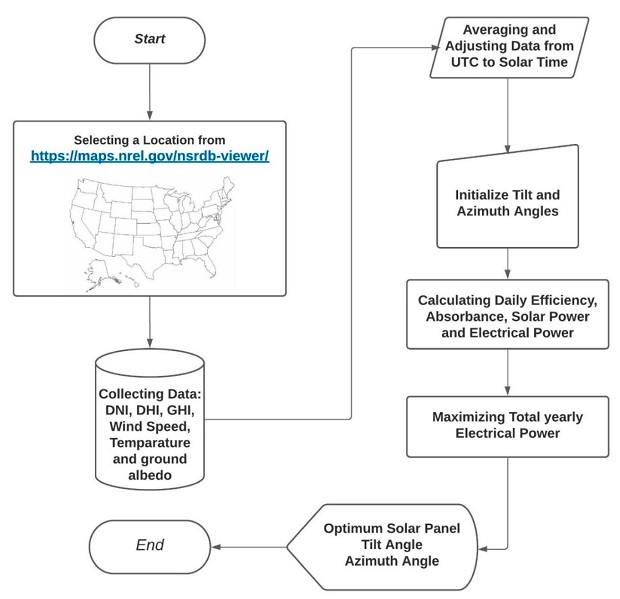 The platform is demonstrated by application to the different climatic conditions characterizing Riverdale, New York; Orlando, Florida; and Los Angeles, California The results reported in Energies can be used to optimize system orientation so as to maximize annual power delivery by solar cells and configure system responses to peak demand at specific times.

By posting a comment you confirm that you have read and accept our Posting Rules and Terms of Use.
Advertisement
RELATED ARTICLES
Europe’s Largest Floating PV Array Goes Up in London
Rising Use of Solar Trackers in Grid-Scale PV
PV energy in unlikely places
The case for siting PV Systems on snow-covered mountains
Windows Are the Key to Energy Efficiency: Study
Advertisement