The biodegradable packaging is comprised of the corn protein zein, starch and naturally derived polymers infused with natural microbial compounds including oil from the herb thyme and citric acid from citrus fruits. 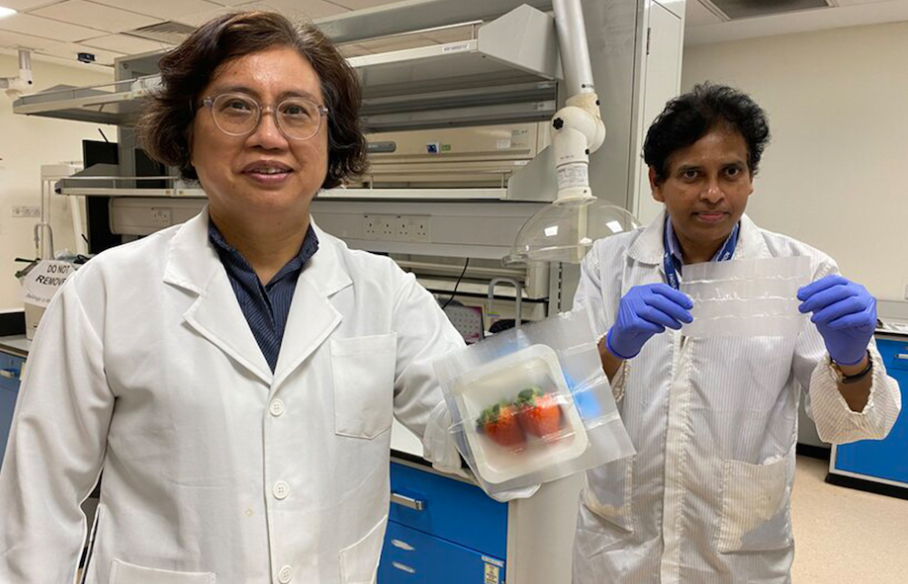 Via electrospinning — a method of fiber production that applies electric force to draw charged threads of polymer solutions up to fiber diameters in the order of some hundred nanometers — the zein and the antimicrobial compounds were combined with cellulose and acetic acid to form the packaging material.

When exposed to an increase in humidity or enzymes from harmful bacteria in the lab during testing, the packaging fibers reportedly released the antimicrobial compounds, killing dangerous bacteria that contaminate food — for instance, E. coli, Listeria and fungi. According to its developers, the material is triggered only by the addition of humidity and the presence of harmful bacteria.

“The packaging can be applied to various produces such as fish, meat, vegetables and fruits,” explained the researchers. “The smart release of antimicrobials only when bacteria or high humidity is present provides protection only when needed, thus minimizing the use of chemicals and preserving the natural composition of foods packaged.”

In the lab, researchers also demonstrated that the packaging extended the shelf life of strawberries to seven days from their typical three to four days in traditional packaging.

The study, Enzyme- and Relative Humidity-Responsive Antimicrobial Fibers for Active Food Packaging, appears in the journal ACS Applied Materials and Interfaces. Watch the accompanying video, which appears courtesy of NTU Singapore, for more information on the smart packaging.

By posting a comment you confirm that you have read and accept our Posting Rules and Terms of Use.
Advertisement
RELATED ARTICLES
Team is turning apple waste into compostable packaging
Engineering technology to thwart foodborne illnesses
Nano-tech mask developed by NTU scientists
Company develops antimicrobial shopping cart guard to protect consumers
Coating protects against harmful viruses, bacteria for 12 months
Advertisement