Sound on the Move: Engineering for the Automobile

Audio systems are one part of the car that most drivers and passengers care about a great deal, and audio engineers and manufacturers know that. Indeed, the passion for audio that’s shared at all stages of the production and consumer chain means a perpetual quest for refinement.

Ever since the Galvin Corp. found a way to put a Motorola radio in cars in 1930, engineers have worked to improve car audio systems in terms of sound quality, cost and efficiency. But an automobile cabin is a difficult acoustic space, and when the inherent tension of manufacturer demands for cost efficiencies is accounted for, building a good car audio system can be a daunting challenge.

“Most of the time, the manufacturer will tell us what a car’s audio system will or won’t have,” says Fujitsu Ten’s Robert Jamison, who has worked in the auto industry for 16 years, and is lead acoustic engineer at the company’s Novi, Mich., headquarters. “We try to plan for what the carmaker wants, whether it’s high-resolution audio or whatever.”

Fujistu has been in car audio since it first supplied radios to Toyota in 1955 for its Crown model. Jamison says one change he’s seen has been the advent of quieter, smaller engines.

“Quieter motors mean the end consumer wants a higher-quality vehicle all around,” he says. Even with lower-cost vehicles, a quieter car creates an expectation of increased quality, including the sound system. 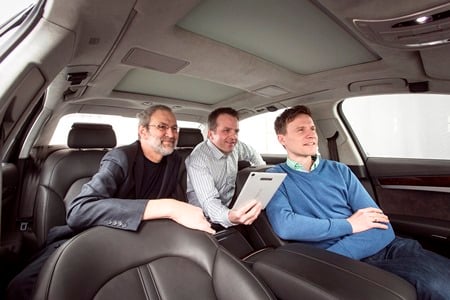 Developed by Harald Popp, Oliver Hellmuth and Jan Plogsties, the Cingo and Symphoria software create 3D surround sound in vehicles and on mobile devices. Image source: Dirk Mahler/FraunhoferThe steady pace at which cars have grown quieter doesn’t mean that acoustical challenges for engineers don’t remain. Consider that a car’s interior includes glass that reflects sound, seat fabric materials that absorb sound, limitations on where speakers can be mounted, and, of course, noise from under the hood and from external road sources. The task for engineers is to understand how all those factors relate to the acoustical space, and to view the cabin environment as unique when determining the road to optimal sound quality.

A quieter ride is one of the many factors that Oliver Hellmuth must take into account as he and his team design audio systems for not just cars, but also for homes, mobile devices and other settings. “A quieter car makes it more important to know which elements you use in the design of an audio system,” says Hellmuth, head of Semantic Audio Processing for Erlangen, Germany-based Fraunhofer, which designs systems for a number of automakers including Audi. “You can hear more detail -- every tiny error.” A few years ago, he says, drivers might have been able to hear problems in the audio system while the car was standing, but not while driving. Road noise masked a lot of problems. With a quieter car cabin, he says, the problems become more apparent.

Hellmuth is part of the Fraunhofer Institute for Integrated Circuits, which developed algorithms known as Cingo and Symphoria that produce what is claimed to be a “natural and immersive” 3D audio experience. “In a concert hall, the music doesn’t just come directly from the stage,” Hellmuth was quoted as saying last spring when the technology was introduced. “We also hear the sound that bounces off the walls and ceiling. It’s the overall combination that gives us the impression of three-dimensional sound.” Cingo and Symphoria analyze which elements of a recording are direct sound and which are reflected sound. They then join them together to create three-dimensional sound.

Engineers know that as vehicle quietness increases, so do customer expectations. That means audio component suppliers must commit to the nuances of sound reproduction in order to provide components that can recreate those details, says Jamison.

“At the same time, more efficient and lighter-weight audio system and components are expected by the manufacturer,” he says. That means audio systems and components must balance the trade-offs of each to reach an end product without performance compromise.

The goal of Hellmuth’s team is to develop intelligent algorithms that reproduce sound in a natural way and without producing distracting artifacts. Doing so must take into account how the driver interacts with the system – the less he or she has to adjust the playback parameters (tone controls, faders and balance) the better.

“In our view, if you have to adjust something it’s not set up correctly,” says Hellmuth. “Most car stereo systems still have low-level technical parameters. The higher-level systems are almost always more interesting to listen to. Our goal is to work on new interfaces for those listening environments.”

Another challenge for the engineer is to realize that, to a point, his or her audio system might amount to so many pearls before swine. Fewer new cars come with CD players, which means that the programming likely comes from a compressed radio signal, a lossy MP3 file or a low-bitrate audio stream played through a smartphone. 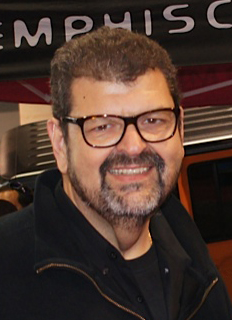 Paul Papadeas, CEO SoundcraftersThe solution for some drivers, now as in times past, may be an after-market enhancement, says Paul Papadeas, president and CEO of Soundcrafters in South Daytona, Fla., and founder of the Spring Break Nationals car audio expo.

“The prevalence of lossy sound, if anything, has stimulated car audio design among higher-end audio providers,” says Papadeas. “Even with cars where the radio can’t be changed because of the dash configuration, after-market processing and equalization equipment will clean those signals to create an audiophile sound. I see more and better processing systems that are good at integrating at the electronics in the vehicle.”

(Lossy compression is the class of data encoding that uses approximations to represent the content.) 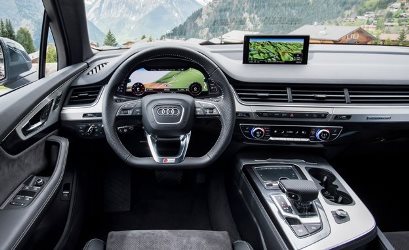 Audi’s Q7 will carry a 3D sound system made by Fraunhofer. Image source: AudiHellmuth says that Fraunhofer has many customers who request systems that can somehow compensate for low-bitrate audio. “If it’s a lossy codec that’s encoded at a high bitrate, it’s not really a problem,” he says. “But with streaming at the lower bitrate limits, we’re facing a lot of artifacts,” Hellmuth says. Fraunhofer is working on a system designed to compensate for low-bitrate playback.

Papadeas says that consumers will soon be demanding screen-based audio systems with more user-friendly interfaces, so that they are less prone to push a wrong button while adjusting the stereo or making a phone call.

Hellmuth points to 3D audio, which uses surround speakers to create a more realistic soundstage in the vehicle. Audi’s Q7 is one vehicle that will sport a 3D sound system made by Fraunhofer. “It adds a missing dimension that compensates reflections from the walls and ceiling much better than a typical surround system,” he says.

At Fujitsu Ten, Jamison says that attention is being focused on speakers that are smaller and lighter but that still offer performance superior to that of previous models. “In Toyotas, we had ferrite speakers years ago, then we went to neodymium speakers, but then the cost of that material increased,” he says. “Now we go with a lightweight ferrite, which weighs the same as neodymium.” It’s now the standard Toyota speaker, he says.

Finally, Hellmuth says to look for cars in the 2020s that have sound zones: discrete sections that allow passengers to listen to their own audio content without headphones. These systems, for example, will allow hands-free communication in the backseat while the driver is getting navigational information in the front seat, or allow children to watch a movie in back while the parents listen to music in front.

“It’s a very interesting idea,” he says, but challenging because “you need total separation of each zone.”

By posting a comment you confirm that you have read and accept our Posting Rules and Terms of Use.
Advertisement
RELATED ARTICLES
Personal Sound Bubble by Silentium to make audio experiences more enjoyable
Clubhouse launches spatial audio for a more immersive experience for members
Hyundai Making it Possible for Passengers to Listen to Different Music in the Same Car
Startup puts the brain back into the audio experience
New audio tech for border surveillance
Advertisement