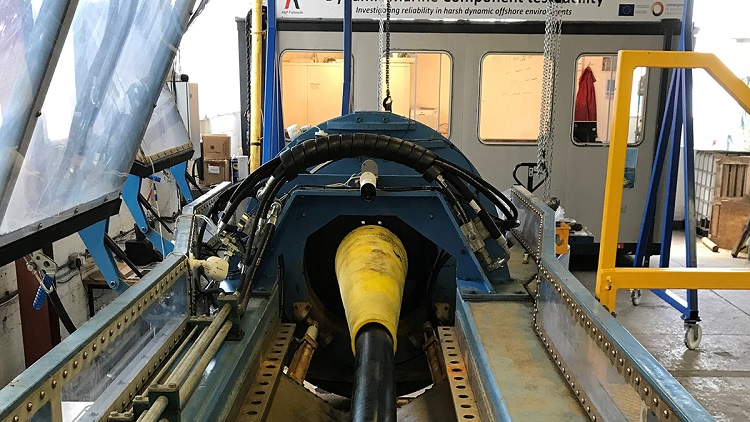 Dynamic cable testing was conducted at the University of Exeter as part of the EU-funded MaRINET2 program. Source: CRP Subsea

These findings underscore the importance of a bend stiffener in extending the fatigue life of equipment to be used in future floating offshore wind applications. Bend stiffeners protect flexible pipes and subsea cables from overbending in fixed and floating offshore wind farms. The elastomeric material from which they are manufactured makes them suited to the constant wave- and current-induced motion of dynamic installations. Thanks to their conical shape, these components gradually increase the overall stiffness of a pipe or cable, preventing overbending at the termination point.

The performance characterization testing entailed bending the cable to a 3.7° angle at the headstock while holding a constant force of 40, 60 and 80 kilonewtons (kN) at the tailstock over a 10 second cycle period. During the fatigue testing, the cable was bent to 4° while holding a constant force of 80 kN. The cycle period was steadily decreased from 10 seconds to 1 second to minimize the overall test duration.

The collaborative project is part of the EU-funded MaRINET2 program.

By posting a comment you confirm that you have read and accept our Posting Rules and Terms of Use.
Advertisement
RELATED ARTICLES
Video: Cable protection system designed for fixed offshore wind turbines
HV Cable to Supply Power to Offshore Oil Platform
First US cable plant to supply the offshore wind sector
Watch aerial fiber deployment by this robot
Why do cables fail?
Advertisement