A new solid polymer ion conductor material and architecture promises to improve the safety and performance of solid-state lithium ion batteries. The conductor combines copper with cellulose nanofibrils, which are polymer tubes derived from wood.

“By incorporating copper with one-dimensional cellulose nanofibrils, we demonstrated that the normally ion-insulating cellulose offers a speedier lithium-ion transport within the polymer chains,” said researcher Liangbing Hu, a professor in the University of Maryland’s Department of Materials Science and Engineering. “In fact, we found this ion conductor achieved a record high ionic conductivity among all solid polymer electrolytes.” 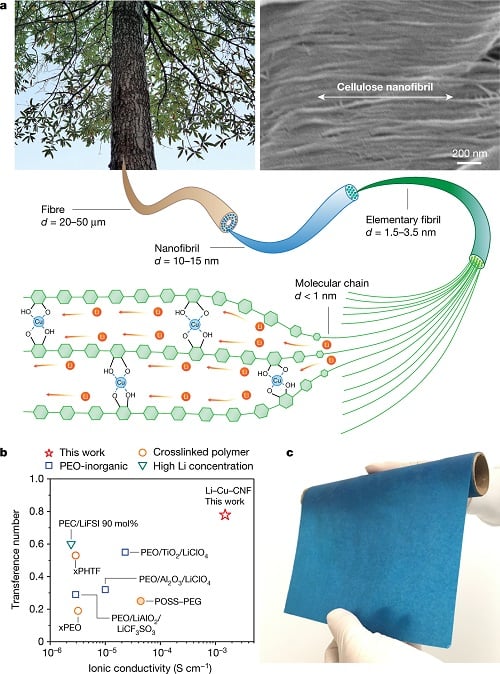 The material has an ion conductivity that is 10 to 100 times better than other polymer ion conductors and could be used as either a solid battery electrolyte or as an ion-conducting binder for the cathode of an all-solid-state battery. Modeling revealed that the copper increases the space between cellulose polymer chains, forming channels through which lithium ions can zip by relatively unimpeded.

Solid electrolytes offer scope to prevent dendrite penetration associated with the use of liquid electrolytes and can be made from non-flammable materials. Thin and flexible, the wood-based material described in Nature can replace the thick and crack-prone ceramics currently used in conductor assembly.

By posting a comment you confirm that you have read and accept our Posting Rules and Terms of Use.
Advertisement
RELATED ARTICLES
A solid approach to safer lithium-ion batteries
‘Glass’ Battery is Fast-Charging and Noncombustible
Nanowires May Boost Fire-Resistant Capabilities of Lithium-ion Batteries
New Electrolysis System Greatly Improves Hydrogen Production Efficiency
Lithium-Ion Battery Grows Back Together
Advertisement