A step closer to fusion ignition 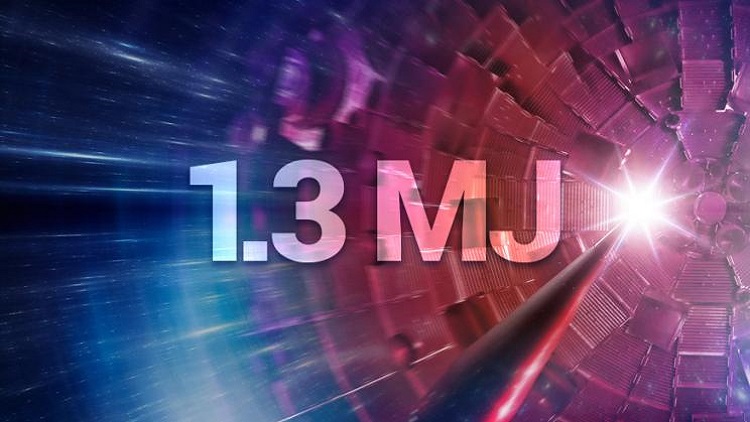 A yield of more than 1.3 MJ puts researchers at the threshold of fusion ignition. Source: John Jett, LLNL

Recent experiments are reported to have triggered ignition for the first time at the National Ignition Facility (NIF) at U.S. Lawrence Livermore National Laboratory (LLNL).

A single laser shot sparked a fusion explosion from a fuel capsule that produced 1.35 MJ, eight times more energy than the facility had ever achieved. This value is also 70% of the energy of the initial laser pulse, bringing the technology close to ignition and the production of an excess of energy.

The inertial confinement fusion system at NIF uses a giant laser to produce 192 beams that are focused on a target in a brief, powerful pulse of 1.9 MJ over about 20 nanoseconds. The aim is to get as much of that energy as possible into the target capsule, a diminutive sphere filled with deuterium and tritium mounted inside a small gold cylinder. As the gold vaporizes, a pulse of x-rays is produced that implodes the capsule, driving the fusion fuel into a tiny ball hot and dense enough to ignite fusion. If such tiny fusion blasts could be triggered at a rate of about 10 per second, a power plant could harvest energy from the high-speed neutrons produced to generate electricity.

The achievement is the result of long-term research efforts devoted to enhancing laser precision and optimizing capsule dimensions and structure.

By posting a comment you confirm that you have read and accept our Posting Rules and Terms of Use.
Advertisement
RELATED ARTICLES
Micro-scale Nuclear Fusion Efficiency Record
Video: The promise of projectile fusion
Video: UK to host Canadian fusion demo facility
Long-range plan for fostering US fusion energy
Precision Machining Methods for Surgical Instruments
Advertisement