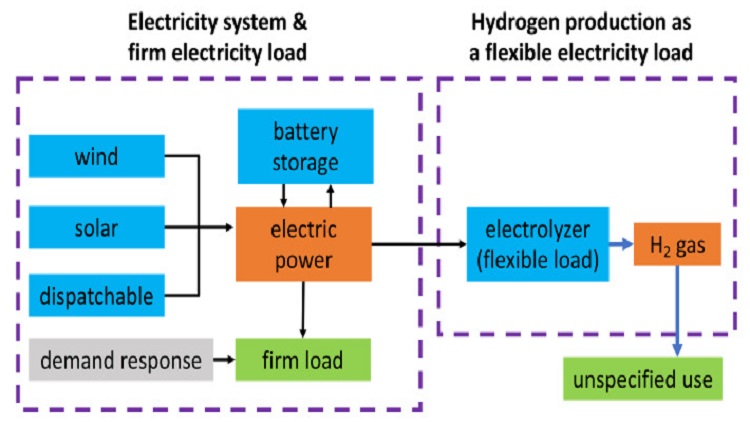 As wind and solar energy systems are increasingly sized to meet peak demand, there is almost always some underutilized generating capacity, a small amount of flexible load can be added to the system at effectively zero electricity cost and operate at high capacity factors. Having the flexibility to redirect unused energy capacity into manufacturing fuels could fill the gap between constant energy demands and variable energy resources. An example of this would be producing hydrogen fuel by water electrolysis.

A macro-scale energy model was applied to hourly weather data to examine least-cost renewable energy system performance in the U.S. Variable wind and solar power, battery storage and other scenarios were considered along with electrolytic hydrogen representing a prototypical flexible load.

The results reported in Advances in Applied Energy indicate that a system using excess electricity to produce hydrogen fuel could be implemented using energy infrastructure built to supply the grid. New capacity would not need to be constructed until the amount of electricity used to power hydrogen fuel cells exceeds about 20% of total energy demand. The cost of any future expansion could be offset by a lower average cost of electricity under this arrangement.

By posting a comment you confirm that you have read and accept our Posting Rules and Terms of Use.
Advertisement
RELATED ARTICLES
Affordable Energy Storage with Power-to-Gas Technology?
The economics of battery-assisted hydrogen production from solar energy
Hydrogen Injected Into Gas Pipeline Helps Power Campus
Video: High-temperature electrolyzer to produce low-cost hydrogen
DC power supplies for a hydrogen energy future
Advertisement