With the numerous types, performance characteristics and fan sizes available, the fan selection process can be complicated and cumbersome, potentially leading to the selection of non-optimal fans. To address this problem, Rosenburg, a worldwide leader in the design, development and manufacturing of fans for a variety of applications, has created the RoVent10 software. This software can assist users in the selection of fan types and their performance characteristics and provide them with pertinent design information and specifications to simplify the cooling system design process. This article also highlights Rosenberg’s new, more powerful Generation 3 EC fan motor, which was selected as a finalist in the AHR 2020 Innovation Awards.

A wind turbine generates power by converting wind energy into mechanical energy, which drives a generator. It primarily consists of an impeller, nacelle and tower (Figure 1). The nacelle houses the core components of the wind turbine, including the gearbox, generator, transformer and switching components. The tower supports the nacelle and impeller and incorporates an inverter that injects the power generated by the wind turbine into the electrical power grid at a constant voltage and frequency. 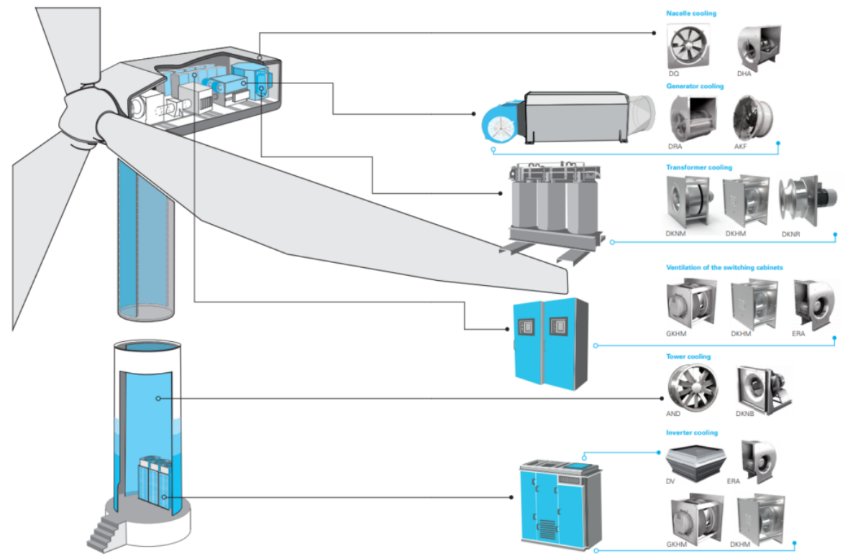 Figure 1. Wind turbine cooling applications. Source: RosenbergAs the world becomes more dependent on wind energy, the demand for greater power from wind turbine generators increases. This increased power demand results in an increased amount of heat produced by all wind turbine components. Effective cooling methods are therefore required, such as fans that have higher air movement capacity and greater efficiency. These fans can improve generator efficiency and increase the operational life of wind turbine components by creating a constant distribution of temperature.

Types and configurations of fans 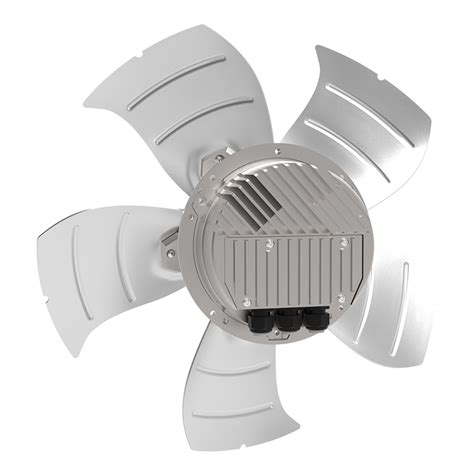 Figure 2. Axial fan. Source: RosenbergAxial fans have blades that rotate around an axis that is parallel to the air flow (Figure 2). They are designed to produce a pressure differential between the front of the fan and the back, which causes air to flow through the fan. The performance and efficiency of axial fans is determined by the number, shape and angle of attack of the fan blades as well as the fan’s rotational speed. Among the advantages of axial fans are high efficiency, low noise and lower input power requirements compared with other fan types. While axial fans create airflow with high flow rates, the airflows have low pressure. For wind turbine applications, axial fans are ideally suited for tower or nacelle cooling. 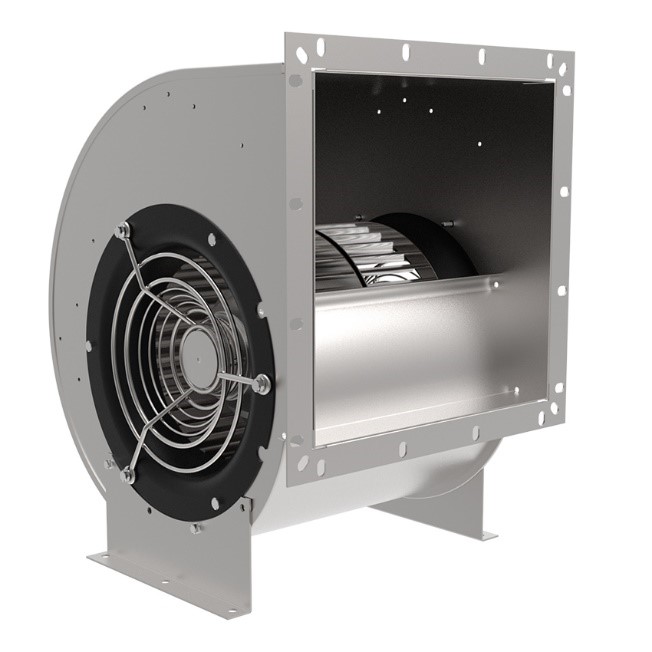 Figure 3. Centrifugal fan. Source: RosenbergCentrifugal fans move air in a direction perpendicular to the axis of a fan wheel, which consists of a series of blades mounted on a circular hub (Figure 3). The incoming air enters through the center of the circular hub and is propelled outward in a radial direction by the fan blades. When compared to axial fans, centrifugal fans can develop higher pressure airflows, although at lower volumetric flow rates. In spite of this, centrifugal fans create a steadier air flow than axial fans and can achieve high levels of efficiency, although they also require higher input power. Centrifugal fans are ideal for high pressure applications such as drying and air conditioning systems, and for wind turbine applications they may be used for generator and nacelle cooling. 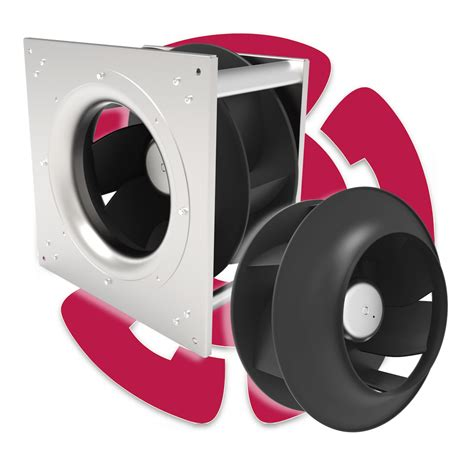 The selection of a fan for a particular wind turbine application requires consideration of numerous technical challenges related to the equipment being cooled, packaging and operational constraints, and environmental conditions. The type of equipment, including size, heat generation capability, duty cycle and operating temperature limits, is usually the prime consideration in the selection of a fan. However, the choice of fan may be limited by packaging constraints, such as the fan location, maximum size and orientation. Operational constraints can further limit fan selection, and include such items as the maximum power available, maintainability and reliability. Environmental conditions, such as temperature extremes, operation in wet or humid environments, and the presence of harsh or corrosive chemicals and materials may further limit fan selection, as the devices must be designed and tested in these environments to ensure safe and reliable operation. Careful consideration must therefore be given to these technical challenges in order to properly select a fan with the appropriate size, speed, pressure, volumetric air flow rate, reliability and cost.

Rosenburg has simplified the fan selection and cooling system design process by creating the RoVent10 software, which is available for download to their customers. RoVent10 can automatically guide users to quickly select among more than 2,900 fan models by simply entering the type of fan and basic design constraints, such as power and motor type, and performance criteria, such as the pressure and volumetric flow rate. RoVent10 then provides a family of performance curves of several fans that satisfy the design and basic performance criteria (Figure 5). The user can then select a fan that operates at peak efficiency, including accessories, such as sensors, controllers and other electronic modules that are compatible with the fan. RoVent10 also provides all necessary documentation including drawings, solid models (if available), specifications, bills of materials, operating manuals, wiring diagrams and pricing information. This information can be used to ensure that the fan can be properly packaged within the cooling system, and that all requirements and specifications are satisfied. The unique and advanced capabilities of RoVent10 greatly simplify the fan selection and cooling system design process. 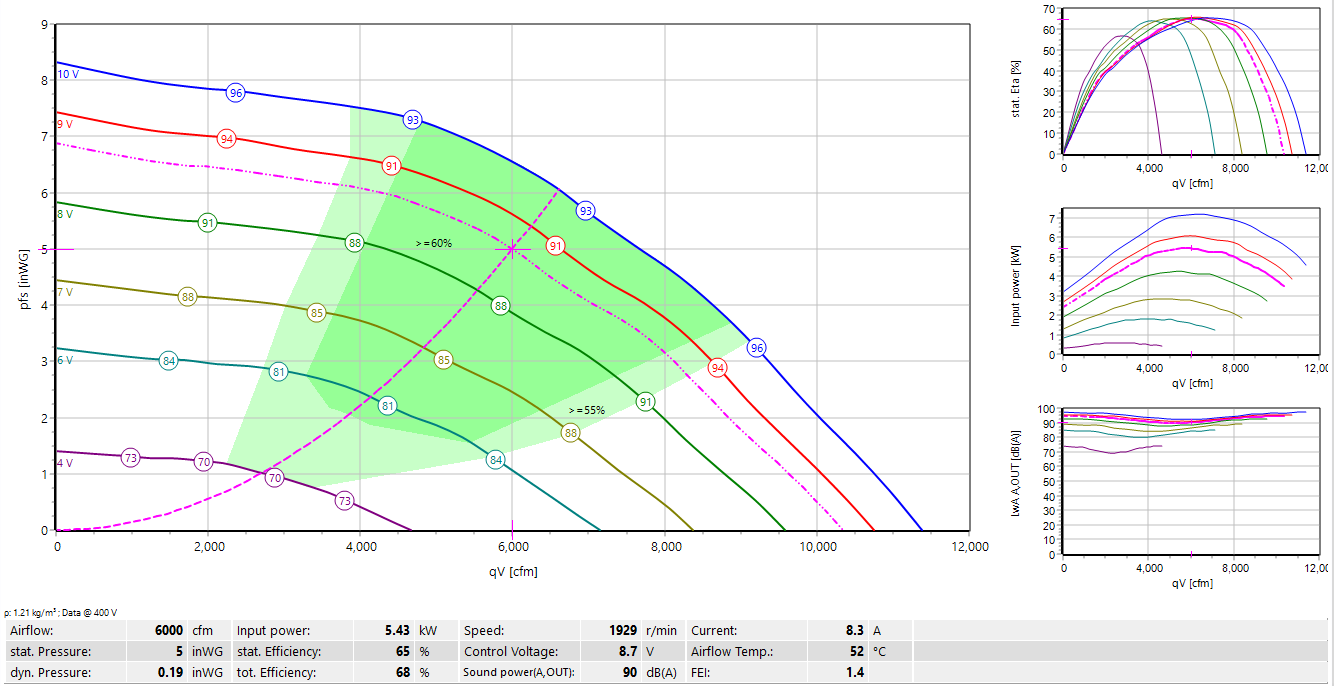 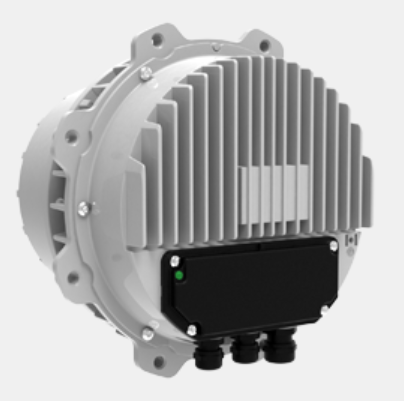 Rosenberg has been a worldwide leader in the development and manufacture of speed controllable external rotor motors, fans and air handling units since 1981. With the worldwide company headquarters in Künzelsau, Germany, engineering skills drive innovation and form the basis of the company’s development and manufacturing work. Additionally, 70% of their products are exported worldwide, and the company is represented by 1,500 employees and 45 sales offices in Europe, Asia, North and South America, and Australia. Their diverse customer base includes the energy, railway, renewables, automotive, health care, industrial and building industries. More information about the company and their products is available on the Rosenberg website.

By posting a comment you confirm that you have read and accept our Posting Rules and Terms of Use.
Advertisement
RELATED ARTICLES
Industrial fans for the rumble of railways
High-Performance Fans for Oil-Cooled Transformers
Five Important Considerations When Selecting a Heavy Industrial Fan
Fan or blower? Three factors to consider
The difference between fans and blowers
Advertisement