Reducing industrial equipment’s power consumption and increasing energy efficiency continues to be an important energy policy goal, with power consumption representing the highest single operating cost for most facilities. For the wastewater industry, targeting the energy efficiency of treatment processes has been an integral part of the effort to create net-zero energy wastewater treatment facilities. For hydraulic mixing systems, the use of a variable frequency drive (VFD) can help maximize energy efficiency, without sacrificing system performance. To demonstrate this, look at the advantage of using VFD to optimize energy consumption of a typical hydraulic mixing system for an anaerobic digester.

Anaerobic digesters are present in most larger wastewater facilities. While they are not the most energy intensive treatment process, the biogas they produce can be effectively used to offset power requirements in other parts of the facility. This is achieved by either using biogas to feed boilers or through co-generation. In some more advanced facilities, the energy produced by co-generation is substantial enough to offset the entire power usage of the facility. In order to maximize the energy output from an anaerobic digester, it is important to produce as much biogas as possible, while reducing energy needed to sustain the digestion process. Hydraulic mixing systems are commonly used to provide mixing for CSTR anaerobic digesters. They consist of multiple nozzle assemblies located within a tank, with flow often driven by a chopper pump. This provides an efficient, even distribution of mixing energy throughout the entire volume, while keeping moving parts out of the digester where maintenance can be more easily performed. For this example, consider the Rotamix hydraulic mixing system, which centers on the Vaughan Chopper Pump, designed to mix a typical 1 MG digester. For most hydraulic mixing systems, as flow to the nozzles is varied, the amount of energy transfer to the fluid also varies. Therefore, through manipulating the operating curve of the chopper pump with a VFD, an operator can control the amount of mixing energy in their process. 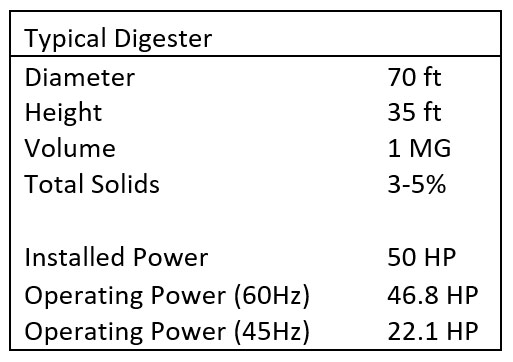 Table 1: Table shows the typical design parameters for a 1 MG digester mixer. Source: VaughanTypical design parameters for a 1 MG digester mixing system are provided in Table 1. At full speed operation of 60 Hz, the mixing system is operating at 46.8 HP. This will serve as baseline energy consumption. If instead a VFD is used to operate at 45 Hz, the mixing system will now be operating at 19.8 HP. Assuming a daily operating schedule of two hours at 60 Hz and the remaining at 45 Hz, this brings the average operating power to 22.1HP — a reduction of almost 53%. Assuming a power cost of $.08/kW, this produces an annual operational savings of $12,982 without reducing system performance. However, in some cases, more mixing energy may be required to maintain digester performance, which will reduce the possible savings. It is ultimately up to the operator to determine the ideal operating schedule for their facility and process.

In addition to anaerobic digesters, VFD can be used to increase efficiency in any process hydraulic mixing system, which has variable mixing energy requirements. This could be batch tanks with variable fluids, or equalization tanks with variable level. With VFDs becoming more common and cost effective, a growing number of applications are able to benefit from using VFD to improve control and efficiency of process mixing.

For wastewater treatment plants concerned with their facilities’ bottom line, the use of a VFD means they do not have to sacrifice mixing power to save on operating costs. Instead, by incorporating a VFD, energy costs can be reduced by 50% or more, while providing a complete mix to the digester and other tanks. In this case, variable mixing can lead to consistent savings.

Erik Larson is a senior engineer with Vaughan Company, working with Rotamix mechanical hydraulic mixing. He has spent several years working in the wastewater industry and holds a bachelor’s degree in civil engineering from Washington State University.

Vaughan Company is a fourth-generation family owned and operated company built on excellence in innovation, quality craftsmanship, lifetime customer service and dependability. For more information on Vaughan Company products or to get in contact with the Vaughan team, visit ChopperPumps.com.