Meat processing as an industry has enormous impacts on the world, both positive and negative, and in the wake of these impacts are both impassioned advocates and fierce critics.

According to the North American Meat Institute (NAMI), a trade association representing a large number of meat processors in the U.S., the meat and poultry industry is the largest segment of U.S. agriculture. A recent analysis showed it accounts for over $1 trillion in total economic output, or 5.6% of gross domestic product, and provides 5.4 million jobs and $257 billion in wages.

At the same time, the industry has been the source of environmental challenges worldwide. Inadequate disposal of slaughterhouse wastewater, which is high in organic content, has contributed to groundwater pollution. Moreover, the sheer quantity of waste produced is an inevitable function of a society so enmeshed in meat, which sustainability advocacy organization The World Counts characterizes as consuming around 350 million tons of meat per year.

This is not to say that the industry is uninterested in addressing these challenges. NAMI has encouraged its members to improve their environmental impact and to share sustainability best practices. Yet these efforts are complicated by the costs involved, and their impact on profitability. This dynamic is fueled not only by the quantity of waste, but also its composition: Fats, oils and greases, also known as FOG, are culprits behind the transformation of water into the insoluble sludge that is a major problem for sewer systems everywhere; municipalities set strict discharge levels to avoid cloggage, and levy costly penalties for noncompliance. The past practices of repurposing this waste as farm fertilizer, or spreading it across a field of soil, have largely been curbed by the evolution of regulations set by the U.S. Environmental Protection Agency.

Fortunately, however, technologies exist for the mitigation of FOG. These include dissolved air flotation (DAF), in which air bubbles are introduced into the sludge to move fat, grease and light solids to the surface; the resulting “sludge blanket” can then be continuously removed and disposed of through a process known as “scum scraping.” This is among the most practical methods of slaughterhouse wastewater treatment, but it does present certain drawbacks: the process does a poor job at total suspended solid (TSS) removal, leaving behind wet solids that are messy and costly to dispose. It can also inadvertently remove nutrients that might otherwise be reused.

Another technique, decanter centrifuge processing, takes an approach more squarely aimed at reliable reuse — and, in so doing, positively impacts both costs and profitability. While some degree of recycling has long been a part of the meat-processing landscape, it has historically been limited by the fact that most parts of a slaughtered animal cannot be transformed into edible flesh. The centrifuge transcends that limitation through its ability to separate sludge into solids (fats and grease), light liquids (oils) and heavy liquids (wastewater). The latter, which typically makes up 80% of the FOG slurry, can be sent to a wastewater treatment facility. Extracted animal fats and proteins can find further use as recycled byproducts, and they can be sold as biodiesel fuel or as blood meal for feed. Such reuse can offset disposal costs and even create its own revenue stream. 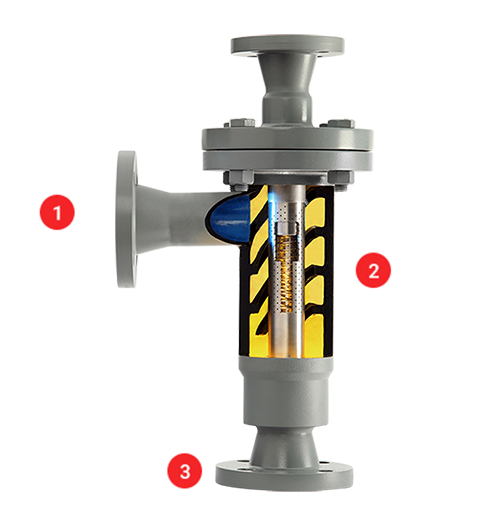 Because the FOG slurry possesses significant viscosity — unprocessed grease typically contains 7% to 10% solid content — breaking it down before it reaches the centrifuge is key to efficient separation. Heating to 180° F to 200° F is an effective method for reducing sludge viscosity, but again its composition presents challenges. Its flow rate is difficult to control, which can result in uneven heating along with blockage within the end-to-end flow design of indirect heat exchangers. This will in turn expose heat transfer surfaces to burn-on and increase the damage to plate gaskets. Inefficiency at either the heater or centrifuge stage will also be reflected in bottom-line fuel costs.

A better choice for this application is to deploy a heater specifically designed for slurry heating, such as the direct steam injection (DSI) BX Series made by Pick Heaters. BX heaters feature a side-entrance configuration and an open-flow design to enable unobstructed flow-through. As illustrated in Figure 2, the slurry first enters from the side, is mixed thoroughly with steam inside the heater body, and exits at the bottom on its way to the centrifuge.

A closer look inside the injection tube reveals that the slurry is exposed to the plant’s medium- or high-pressure steam through hundreds of small orifices. A spring-loaded piston adjusts the number of exposed orifices in response to load changes, maintaining a positive pressure differential. This translates to a negligible drop in pressure (less than 2 psi) and less pressure drop to factor into pump sizing. Low noise generation (less than or equal to 85 dBA) along with smooth operation eliminates pipe vibration.

As a result of these innovations, the BX Series offers same even heating at precisely controlled temperatures that industrial design engineers have come to expect from DSI solutions — rapid mixing, instantaneous heat transfer, 100% available steam energy absorbed into the slurry or liquid — despite the additional challenges inherit to slaughterhouse waste.

The technologies employed by modern meat-processing plants are aimed not only at minimizing costs and maximizing profitability, but also at addressing environmental challenges and moving toward sustainability. The deployment of strategies to mitigate FOG waste, such as decanter centrifuge processing, is perhaps the most visible evidence of these efforts. But behind the scenes, precise and controllable sources of heating play a critical role in their optimization.

DSI in general, and the Pick Heaters BX Series specifically, are ideally suited to applications in the meat-processing industry. Seen in the larger context, one can even make the case that the BX is not simply a solid choice as a heater — but also part of a solution to one of the most pressing challenges the meat industry faces today.

This is pretty interesting. There definitely a need for this... on somewhat on the same lines, reminds me of how Las Vegas disposes of it food waste from the restaurants. Which basically a recovery and reuse.

there is value in FOG.