Brown grease – composed of fats, oils, and grease (FOG) and rotting food – has long been a problem for restaurants, food service operations and commercial kitchens. Brown grease can clog sewer lines and interfere with septic systems and sewage treatment operations, so restaurants install grease traps or gravity interceptors to collect it from kitchen sinks and floor drains for later disposal.

Most brown grease from waste traps has historically ended up as landfill, but recognition of its value for production of fertilizer, biodiesel and other products, as well as more stringent EPA regulations, are driving a trend of brown grease recycling.

The unprocessed grease is a viscous slurry, with a typical solid content of 7% to 10%. It must be heated to reduce the viscosity and allow the components to be separated, but the heating of viscous slurries is a difficult task. Challenges include plugging, fouling and inconsistent heating. Direct steam injection (DSI) is a great choice for this demanding application due to its high energy efficiency and ease of use compared to indirect heating methods.

Figure 1 shows a DSI-based system for processing waste-trap grease. A progressive cavity pump is used to transfer the brown grease from the holding tank. This type of pump is preferred for high-viscosity slurries because its mechanical and volumetric efficiency increases as does the viscosity; in contrast, a centrifugal pump becomes less efficient with increasing viscosity. The flow rate of the progressive cavity pump also remains relatively constant with variations in viscosity.

The slurry then passes to a DSI heater, such as the Pick BX, that heats it instantly from a nominal 60° F to 180° F. The heater must provide consistent heating of the slurry using medium to high-pressure steam and a liquid pressure of 20 psig.

An electronic controller monitors the temperature via a resistance-temperature detector and regulates a steam control valve to maintain the desired 180° F.

Finally, the heated slurry is sent to a decanter centrifuge to separate solids, light liquids such as oils and heavy liquids like wastewater.

The ABCs of DSI

A DSI heater injects steam directly into the fluid for an efficient transfer of heat – 100% of the available energy from the steam is instantly absorbed by the liquid.

The tremendous amount of energy available in the steam makes it imperative that the energy be dissipated quickly into the fluid to maintain stability. Failure to dissipate and condense the steam quickly can lead to inconsistent temperatures and potentially severe steam hammer. 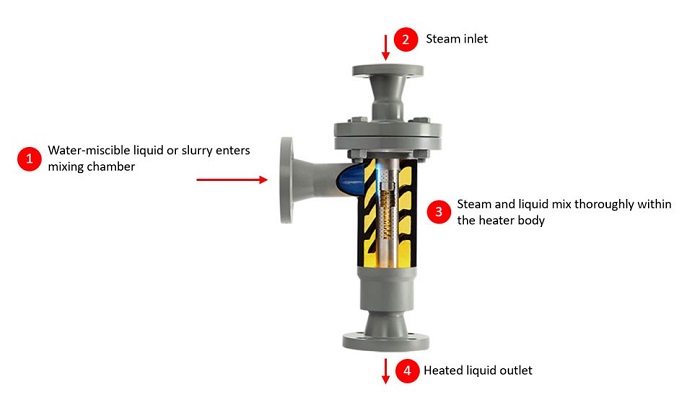 The Pick BX heater disperses the steam in many fine streams through precisely arranged orifices, promoting rapid mixing and instantaneous heat transfer. As the steam enters the internal injection tube it acts against a spring-loaded piston to expose some or all or the orifice pattern. As the steam input varies due to load changes, the piston adjusts the number of exposed orifices, providing rapid response to process changes.

The spring and piston arrangement prevents equalization of steam and liquid pressures, eliminating harmful shock and vibration caused by steam hammer. The helical flights inside the chamber ensure complete and thorough mixing of steam and liquid.

A low pressure drop allows the slurry to flow through the heater without obstruction. This results in negligible pressure drop when handling high-viscosity formulations and allows for use of plant’s medium to high-pressure steam. The liquid pressure drop is typically only 1 psi, and the sound level is usually 85 dBA or less.

In a brown grease processing application, the efficient design of the BX DSI heater can cut fuel costs up to 28% compared to tank steam sparging, indirect shell and tube or plate heat exchangers.

In 1945, Pick Heaters developed and patented the concept of DSI heating. Ever since then, Pick has been a key part of industrial heating in industries ranging from food to chemical and pharmaceutical processing, pulp and paper, textile to power plants. The company produces a wide range of constant- and variable-flow DSI heaters, as well as sanitary, packaged systems and custom designs.