Singapore to Go Driverless at Ports 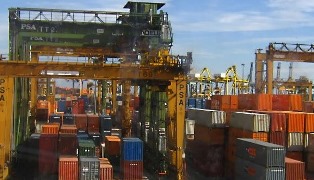 Truck platooning technology will move containers between port terminalsPang Kin Keong, permanent secretary for Transport, indicated that truck platooning at ports could consist of a truck with a driver, followed by three or four driverless vehicles. The hope is that autonomous vehicle use could reduce the reliance on manpower, increase productivity and solve the country’s driver shortage.

The country also indicates that it has an interest in testing autonomous vehicles in selected Singapore neighborhoods where vehicles can be summoned via a mobile app. The belief is that driverless vehicles will cause a shift from individual ownership to vehicle sharing arrangements and mobility as a service, especially where public transportation and taxis are not viable.

Officials acknowledge that challenges such as insurance, safety, reliability and liability will need to be resolved before wide-scale use of autonomous vehicles can occur.

By posting a comment you confirm that you have read and accept our Posting Rules and Terms of Use.
Advertisement
RELATED ARTICLES
Video: EPA issues rules that impact petroleum refineries. Singapore to test driverless trucks at its ports. Have a spare $130,000? Then have we got a car for you!
Uber's Autonomous Trucks Have Been Delivering Goods Since November 2017
Einride to provide Swedish grocery with electric, self-driving trucks
Startup employs human drivers to oversee autonomous vehicles
Self-Driving Vehicles? A Non-Event for Insurance Firms, Report Says
Advertisement