A Duke University study finds that over a nine-year period ending in 2014, 250 billion gallons of water were used in hydraulically fractured wells in the U.S. The fracked wells generated some 210 billion gallons of wastewater. Total water used in fracking accounts for less than 1% of total industrial water use nationwide. The study indicates that, compared to other energy extraction methods, fracking is less water-intensive. Underground coal and uranium mining, and oil recovery enhancement extraction use between 2.5 to 13 times more water per unit of energy produced. 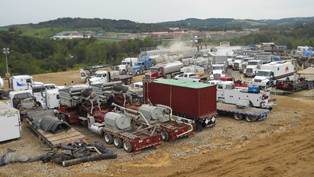 Hydraulic fracturing drill site. Source: wikipedia.orgThe study also finds that fracked oil wells generate half of a barrel of wastewater for each barrel of oil. Conventional land-based oil wells generate more than three barrels of wastewater for each barrel of oil. The study includes data from multiple government and industry sources. It is also one of the first assessments of fracking's total water footprint nationally and for each of the 10 major U.S. shale gas or tight oil basins.

The study also finds that although the fraction is small, hydraulic fracking can still pose serious risks to local water supplies, especially in drought-prone regions such as the Barnett formation in Texas, where exploration and development are rapidly intensifying. Drilling a single well can require 3-6 million gallons of water and thousands of wells are fracked each year. Local water shortages could limit future production, the study says.

The study was led by Avner Vengosh, professor of geochemistry and water quality at Duke's Nicholas School of the Environment.

Disposing of chemical-laden flowback water and brined wastewater produced over the lifetime of an unconventional oil or gas well is challenging, the study says. Based on high contaminant levels, the amount of wastewater produced from hydraulic fracturing is on the same level as the amount of water used to frack the wells in the first place, but water quality is different from the water put in.

Funding for the study came from a National Science Foundation grant and the Duke University Energy Initiative.

By posting a comment you confirm that you have read and accept our Posting Rules and Terms of Use.
Advertisement
RELATED ARTICLES
North Dakota Water, Soil Contamination Linked to Fracking Spills
Study links fracking to increased traffic accidents, fatalities
Are Small Earthquakes at Fracking Sites the Canaries in the Coal Mine?
Study Assesses Spill Risk at Fracked Oil Wells
Freshwater Mussels' Shells Record Fracking Pollution
Advertisement