KAUST team has developed a sensor for detecting harmful gases 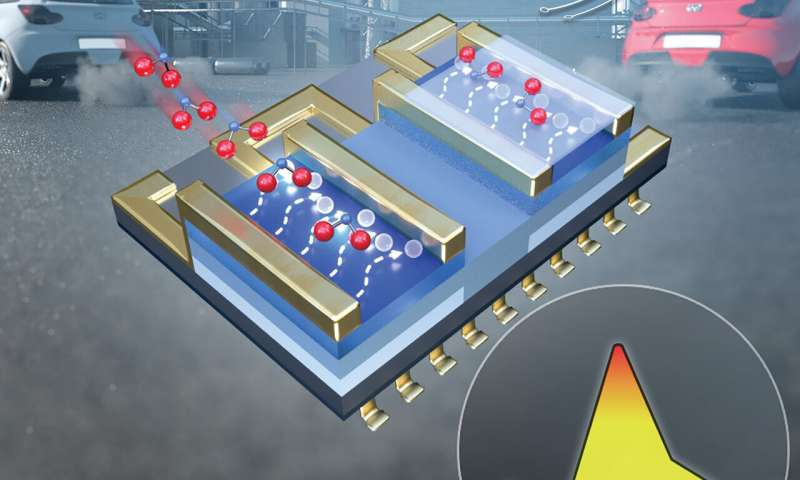 The device, which is considered just one piece of an air quality sensor distributed network, detects nitrogen oxide (NO2), a hazardous group of gases associated with air pollution.

At the heart of the compact KAUST sensor is an NO2-sensing thin-film transistor. The indium gallium zinc oxide (IGZO) film serves as both an electronic component of the device and also as the NO2-detecting layer.

The NO2 molecule is attracted to the electrons located on the transistor's surface. Consequently, as the number of NO2 molecules that adhere to the IGZO film increases, the more electrons are eliminated from the film’s surface, transforming the electronic output and prompting an NO2 detection notification.

Following notification, the IGZO layer is subsequently revived with light from an integrated blue light emitting diode (LED), which produces negatively charged electrons and positively charged holes in the IGZO film that neutralizes absorbed NO2, thereby releasing it from the film’s surface and resetting the sensors.

With the hope of improving air quality with the placement of the compact sensors throughout metropolitan areas, the KAUST team intends to turn their research into a prototype and have detailed their findings in the journal ACS Sensors.

By posting a comment you confirm that you have read and accept our Posting Rules and Terms of Use.
Advertisement
RELATED ARTICLES
Fujitsu Uses Graphene to Open Gate to New Gas Sensors
MOF Sensors Have Sulfur Dioxide in the Pocket
Researchers develop magnetized artificial skin
Decal Electronics Form Flexible Health Sensors
CCD Camera: A Growing Universe of Uses
Advertisement