Engineering solutions for the developing world

This article is Part 1 of Welding Digest's two-part series on engineering for the developing world. Read Part 2 here.

Reading news about engineering from a Western perspective usually takes one of several directions. These may include steadily increasing capabilities of artificial intelligence (AI) systems, medical research conducted in major universities or the goings-on of major tech luminaries like Bill Gates, Elon Musk and others.

While these developments are newsworthy and can result in productivity gains, automation and cost-effectiveness, engineering looks quite different in less-developed areas of the globe. While throwing automation or AI at an existing problem can improve social and economic problems in developing countries, smaller and more incremental improvements often work wonders, and the newer concept of “breakthrough” engineering can have a major impact on improving global quality of life.

Far from Silicon Valley boardrooms in both the geographic and economic sense, developing areas often rely on the concept of advanced frugal innovation to create engineered solutions. While Western technology and engineering firms work to develop the next great game-changing innovation or make major improvements to an existing one, in other parts of the world engineers work for “good-enough” solutions.

Human-powered water filters are an example of jugaad innovations. They look like stationary exercise bikes, but are set up to operate a peristaltic pump that moves water through a filter from one container to another when pedaled. The bikes are light enough to be portable, so people in areas that struggle with water access can easily move them to water sources and perform filtration using simple leg movements. 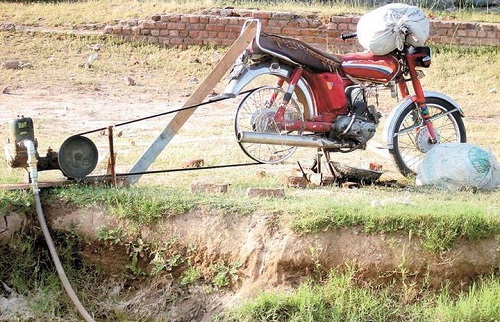 Figure 1: An example of jugaad engineering, repurposing a motorcycle to pump water. Source: Aavtar Singh / CC BY 2.0Jugaad solutions are common in India, where “good enough” engineering is employed in rural or impoverished areas or following natural disasters. The 2001 Gujarat earthquake, for example, killed over 14,000 people and destroyed nearly 400,000 homes. In the wake of the disaster, a local entrepreneur developed the Mitticool, a low-cost clay refrigerator that does not require electricity.

Water is stored in the device’s upper chamber, and as it drips down the sides of the refrigerator it evaporates and removes heat, keeping both chambers cool. Fresh fruits, vegetables and milk can be stored in the lower chamber for two to three days. Mitticool fridges are still relatively common in India.

Increasing global connectivity also benefits local engineering solutions, in that local engineers can look outside their immediate communities for expertise. On engineering forum CR4, an engineer building an apparatus to dry coconut in the Pacific Islands was having problems welding a stainless steel sheet. The user was able to solicit ideas from engineers around the globe, and ended up walking away with several potential solutions that were not available locally.

By posting a comment you confirm that you have read and accept our Posting Rules and Terms of Use.
Re: Engineering solutions for the developing world
#1

Hammer of Thor in Pakistan
#8