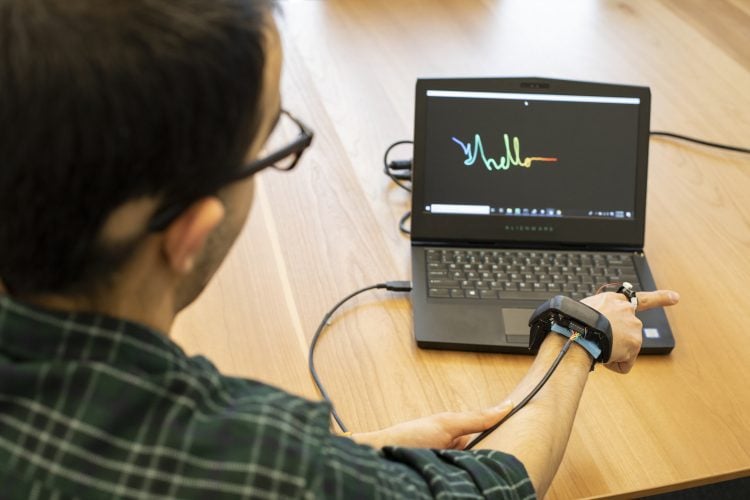 The device, dubbed AuraRing, is a wearable that attaches to both the wrist and the finger to monitor the movements of the wearer’s hand. The ring is made up of wires would up to roughly 800 times around a 3D printed ring. Current travels through the wire, generating a magnetic field that is captured by the wristband's three sensors, enabling the wristband to precisely pinpoint the location of the finger.

Consuming just 2.3 milliwatts of power, the AuraRing reportedly generates an oscillating magnetic field that is constantly detectable, according to its developers. Such a configuration enables the tracking the location of the entire finger and not just a few finger gestures. As such, its developers believe that the AuraRing will one day enable wearers to text, browse social media and play games on their phones by simply making a tapping, flicking or pinching motion with their index finger to send data.

In addition to enabling smartphone users to manipulate their phones with just a flick of their fingers, researchers see possible use cases for the ring in detecting early signs of Parkinson’s disease or assisting stroke patients with rehabilitation.

More information about the AuraRing appears in the journal Proceedings of the ACM on Interactive, Mobile, Wearable and Ubiquitous Technologies.

By posting a comment you confirm that you have read and accept our Posting Rules and Terms of Use.
Advertisement
RELATED ARTICLES
The wearables helping to expedite a return to normal post-COVID-19
Technology Turns Arm into Smartwatch Touchpad
Video: Earring enables glucose monitoring in style
Turning Finger Tapping into Sound
Wearables detect fever before other COVID-19 symptoms emerge
Advertisement