Microplastic pollution is raining down in London 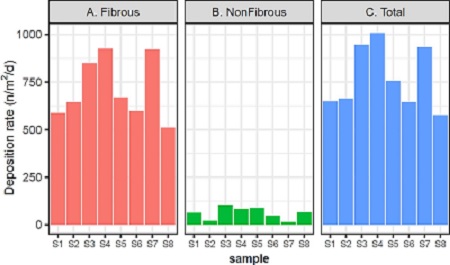 Atmospheric deposition samples collected by rain gauges 50 m above ground level at a riverside urban site during January to February 2018 were analyzed by Fourier transform infrared (FTIR) spectroscopy. Microplastics were detected in every sample, with deposition rates determined to be in the 575 to 1,008 particles/m2/day range. These rates exceed those measured for atmospheric deposition of microplastics at study sites in China and in Paris, and are almost 20 times higher than those observed in the French Pyrenees.

Fibrous microplastics associated with textiles comprised 92% of the samples. Non-fibrous species were derived from plastic bags, packaging and other polystyrene-based products. These particles can be transported up to 95 km, but analysis of local meteorological conditions suggests local sources play a major role in microplastics deposition in London. The research published in Environment International points to urban areas as a contributor of airborne microplastics to the environment and urges identification of emission sources as a focal point for future research.

Re: Microplastic pollution is raining down in London
#1

Densely populated cities rarely accommodate simple clotheslines for drying household washing. Instead, such cities are home to millions of electric tumble driers, whose exhausts to atmosphere are rich in fibrous microplastics detritus.

Clothes-washer lint filters are the first line of defence, both for ocean protection and atmosphere protection, but fresh microfibres are shredded from the textile in the following dryer process.

Commonly, condominium rules disallow drying of clothes on apartment balconies. This forces the installation of indoor drying appliances, of which the tumble dryer is the most common. A higher power than the building owners' associations could look to re-assess outdoor drying rules and line availability, hence minimise the need for tumble dryers.

Re: Microplastic pollution is raining down in London
#3
In reply to #1
lrsheldon

when growing up in PA my folks never had a Dryer, clothes were line dried all year. In the winter the clothes freeze dried but they did dry.

Re: Microplastic pollution is raining down in London
#2

Re: Microplastic pollution is raining down in London
#4

Re: Microplastic pollution is raining down in London
#5

1. If 92% fibrous, and much is dryer-related, should we use finer screens on lint filters?

2. Microplastics are contaminants but not pollutants. Synthetic fibers (polypropylene, polyester and polyamides) are not toxic.

3. Does the study tell how much wool or cotton? Are nonplastic fibers less or more objectionable in the air, and if so, why?

4. The remaining 8% is from bags, packaging and other polystyrene? Bags are not polystyrene, some foam packaging is. Bags are mostly polyethylene; neither plastic will disintegrate to microparticles until after long exposure to sunlight.