Requirements for precision techniques in manufacturing operations have bolstered the use of laser triangulation on production lines, where it is used for industrial displacement measurement. 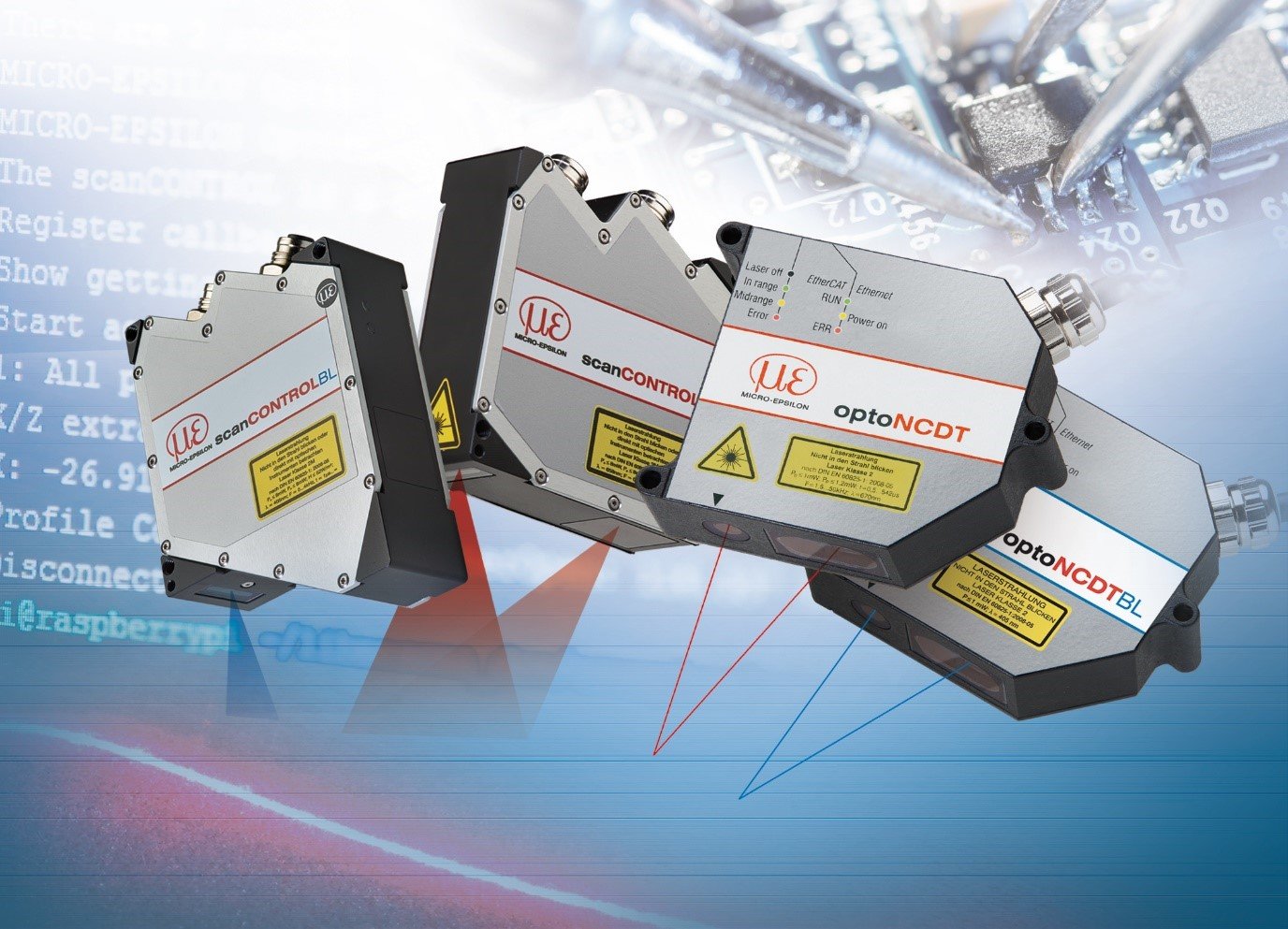 From its development more than two decades ago, the default measurement technology has used a red laser light source. Red light lasers are as familiar in grocery store checkout stations as they are on the production line.

But effective as red lasers are, they can come up short in several applications. To overcome these challenges, Micro-Epsilon developed and patented sensors based on blue laser technology.

Here, we introduce some basic concepts around laser displacement measurement, highlight the benefits and drawbacks of both red and blue laser light and review applications where Micro-Epsilon’s patented blue laser light technology presents a superior choice to traditional red lasers.

In practical terms, linear displacement measurement refers to the movement of an object in one direction along a single axis. In an industrial setting, this could be a discrete piece of material traveling along a belt or a roller. As the material passes the measuring device, an output signal from the linear displacement sensor takes measurements in units of millimeters or inches, or even in micrometers.

Laser triangulation sensors pinpoint a narrow beam of laser light onto an object or sample, and light reflected from the object’s surface is focused by a high-quality optical lens onto a charge-coupled device (CCD) or complementary metal-oxide semiconductor (CMOS) image sensor.

As the object moves, the reflected light also changes position on the image sensor, which is computed to detect the position of the object or sample.

Red vs. blue: When to use what

Laser triangulation technology is optimal for automated position sensing as well as for passive and dynamic dimensional measurements. Most often, the laser used in this application is red in color, and this type of laser suits the vast majority of industrial applications. And because of the red laser’s ubiquity and lengthy development history, a wide variety of economical red laser measurement and sensing systems are available.

Red laser light is also preferable for fast moving objects, due to its long wavelength and intensity. Red lasers typically operate at 670 nm, close to the infrared spectrum and are perfect for use with CCD sensors. The high intensity of the red laser can also be a disadvantage, as it is more likely to penetrate and be diffused on the target material, especially on organic and transparent materials, further decreasing measurement accuracy.

The same is also true for metal forging. It was formerly a challenge to use red laser measuring techniques in the steel industry, where red-hot glowing metals, typically above 700° C, emit enough infrared light to skew the image sensor readings.

To solve these challenges, blue light laser triangulation technology was developed. Blue lasers operate at approximately 405 nm of the visible light spectrum, a shorter wavelength with lower intensity than red, and close to the ultraviolet spectrum. This creates a more focused laser point with less surface diffusion, resulting in less noise in the sensor, thereby increasing measurement accuracy, sometimes by a scale of two or three times when compared to red lasers.

Blue laser technology is more than just a light color change. It also requires a different lens that is optimal for short wavelength radiation, different optical filters for the reflected light, a different light sensor and innovative analysis algorithms.

Blue light laser triangulation technology has proved so valuable that the applications for it have expanded over time. It is especially prevalent in automotive testing, for example in engine manifolds or disc brakes. It has also been used in paper production, as a red light laser shines through damp paper pulp and does not return usable measurements.

Blue light is preferable to red light laser triangulation for measuring transparent or translucent materials, reflective or specular surfaces, and organic materials, including wood and food.

Blue laser measurements on red-hot objects, as well as transparent objects like glass or plastic, is the proprietary and patented technology of Micro-Epsilon.

Micro-Epsilon plays a leading role in measurement technology. For more than 50 years, the company has offered reliable, high performance, unique solutions whenever high precision measurement or inspection is required. Its product range covers sensors to measure distance and displacement, sensors for IR temperature measurement and color detection, as well as systems for dimensional measurement and defect detection.

To learn more about Micro-Epsilon and its product solutions, click here.