How do oleo-pneumatic shock struts work? 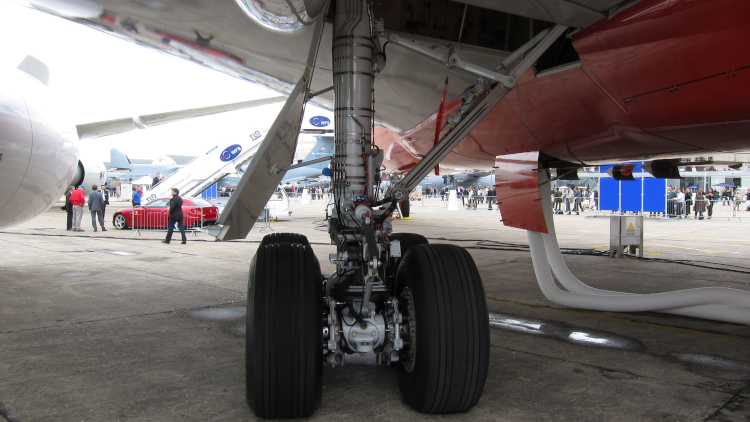 The vertical shock strut cylinder is visible in this image of the left main landing gear of a prototype Boeing 747-8I. Source: Olivier Cleynen / CC BY-SA 3.0

Cut-away view of an oleo strut. Source: Rainbow Aviation ServicesOleo-pneumatic (oil/gas) shock struts, or oleo struts, are shock absorbers that cushion forces associated with aircraft landings and ground maneuvers such as taxiing. Oleo struts are critical elements of aircraft landing gear, connecting an aircraft’s wheels to the airframe to provide the main path through which load forces are transmitted from the ground to the airframe.

By converting a portion of the aircraft’s kinetic energy to heat, oleo struts absorb and dissipate forces associated with landing. They minimize the accelerations experienced by the airframe and its occupants as the aircraft makes contact with the runway surface during landing – including damping the recoil to reduce bounce – and as it travels along the ground during taxiing maneuvers.

Another category of shock absorbers are those using a solid spring, such as a steel coil spring, steel leaf spring or rubber spring consisting of a stack of rubber disks. 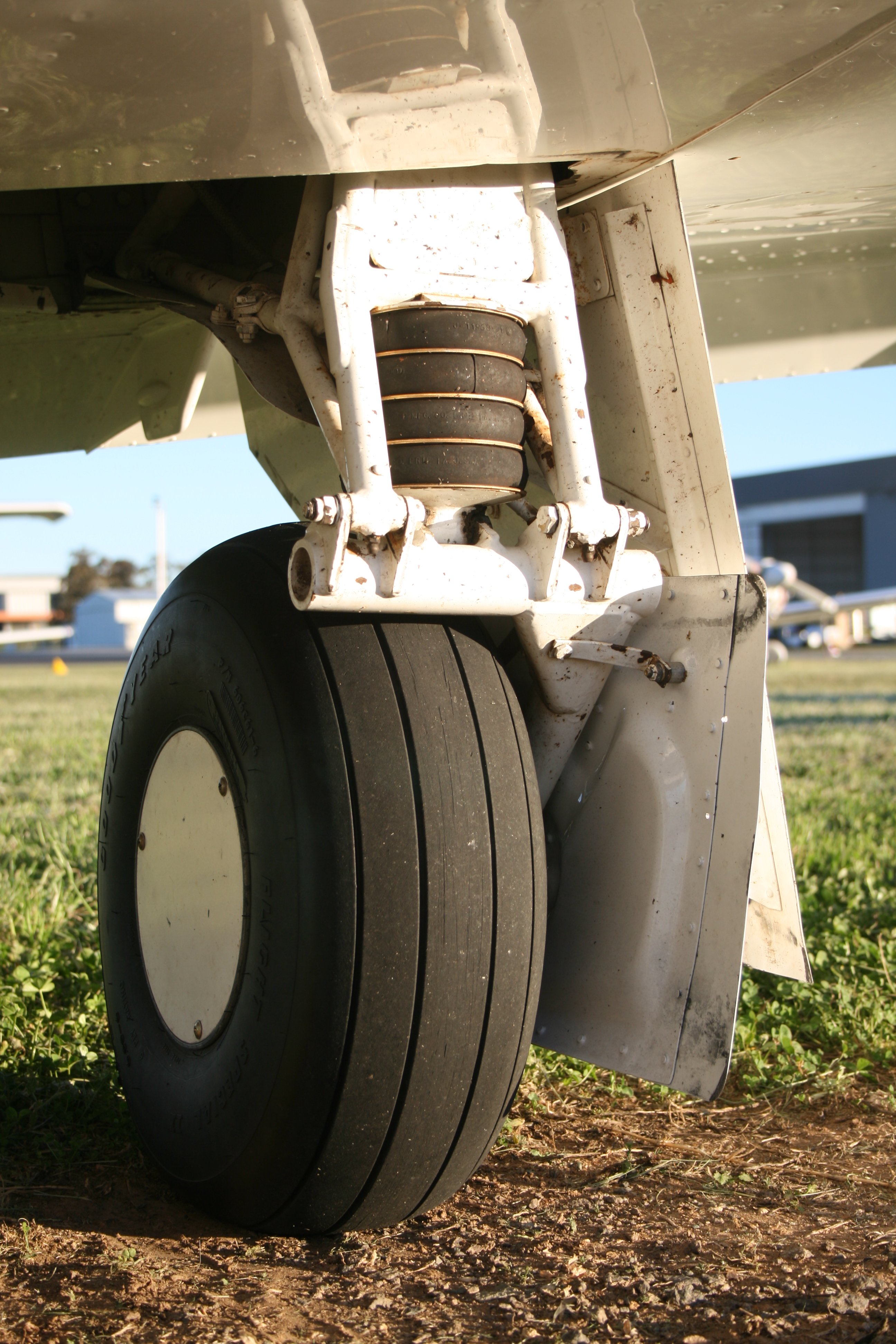 Rubber disc shock absorbers are seen in one of the two main landing gear legs of a Mooney M20F Executive 21, a single engine piston aircraft that seats a pilot and up to 3 passengers.

Oleo-pneumatic shock struts are the most common type of shock absorber used on modern aircraft. Not only do oleo struts have a higher efficiency and damping-to-weight ratio than any other type of shock absorber, they also dissipate energy in a more optimal way, storing and releasing energy at controlled rates during the compression and expansion cycles of the strut to provide a relatively constant impact force.

The same principle by which oleo struts work is used in some gas-hydraulic buffers to absorb energy in industrial, rail and elevator applications by controlling equipment deceleration and dissipating impact forces. The principle is also similar to that used in hydropneumatic suspension systems in some automobiles and tractors. 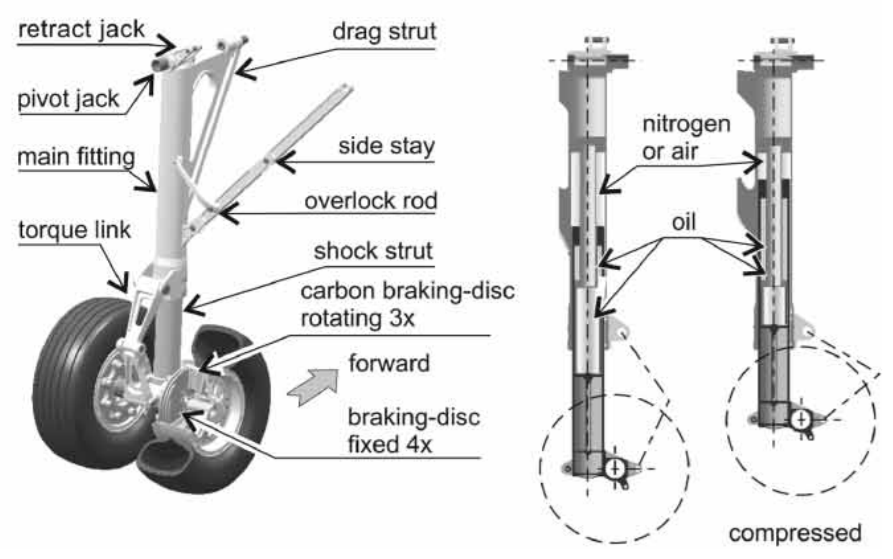 Schematic showing some of the main components of the left main landing gear of an Embraer EMB 190 (left) and the uncompressed and compressed states of its oleo shock strut (right). Source: R Lernbeiss and M Plöchl. Simulation model of an aircraft landing gear considering elastic properties of the shock absorber.

Oleo struts absorb and dissipate shock loads using a combination of two fluids — a gas and a hydraulic fluid — contained in two chambers — a cylinder and a piston. The lower piston — attached to the axle upon which a wheel or wheels are mounted — travels up and down in the upper cylinder, which is fixed to the aircraft structure through the landing gear. 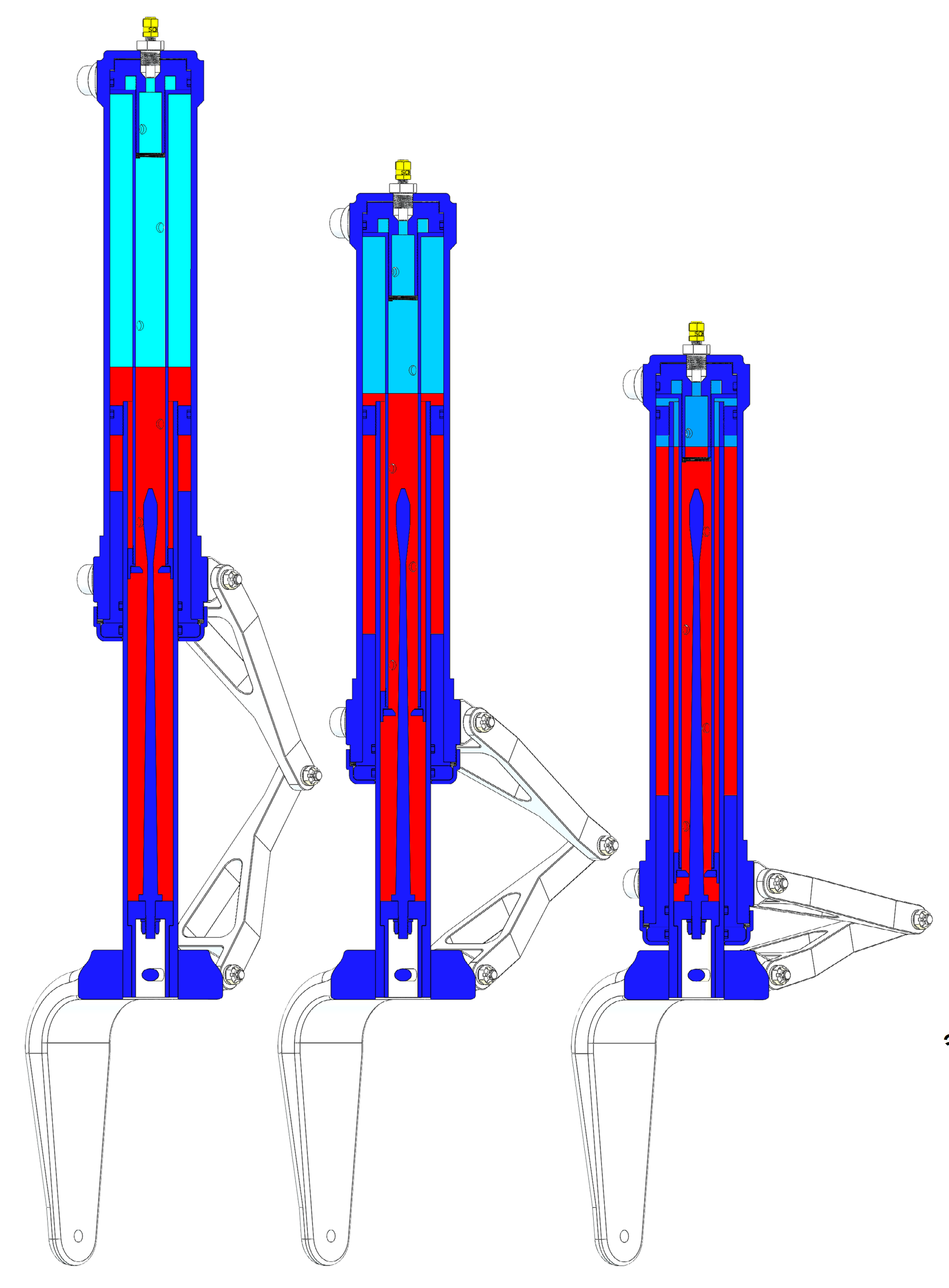 Diagram illustrating the interaction between the gas (light blue) and hydraulic fluid (red) in an oleo strut during compression of the strut. Source: Rainbow Aviation Services

As the aircraft touches down, the piston travels up into the cylinder, forcing hydraulic fluid through the orifice into the upper chamber. Gas in the upper chamber, functioning like a spring, is compressed by the hydraulic fluid to absorb the impact of touchdown as well as bumps during taxiing. During the recoil, the gas expands and forces hydraulic fluid back into the lower chamber causing extension of the strut as the piston travels back down out of the cylinder. The compression of gas and movement of fluid through the orifice generates heat that is transferred via convection and conduction through the strut to the airframe and atmosphere.

The rate at which hydraulic fluid enters and leaves the upper chamber, and thus the speed at which compression and expansion of the gas occurs, is controlled by the size of the orifice. The hydraulic fluid, therefore, restricted by the orifice, acts to dampen the movement of the piston during shock absorption and recoil. 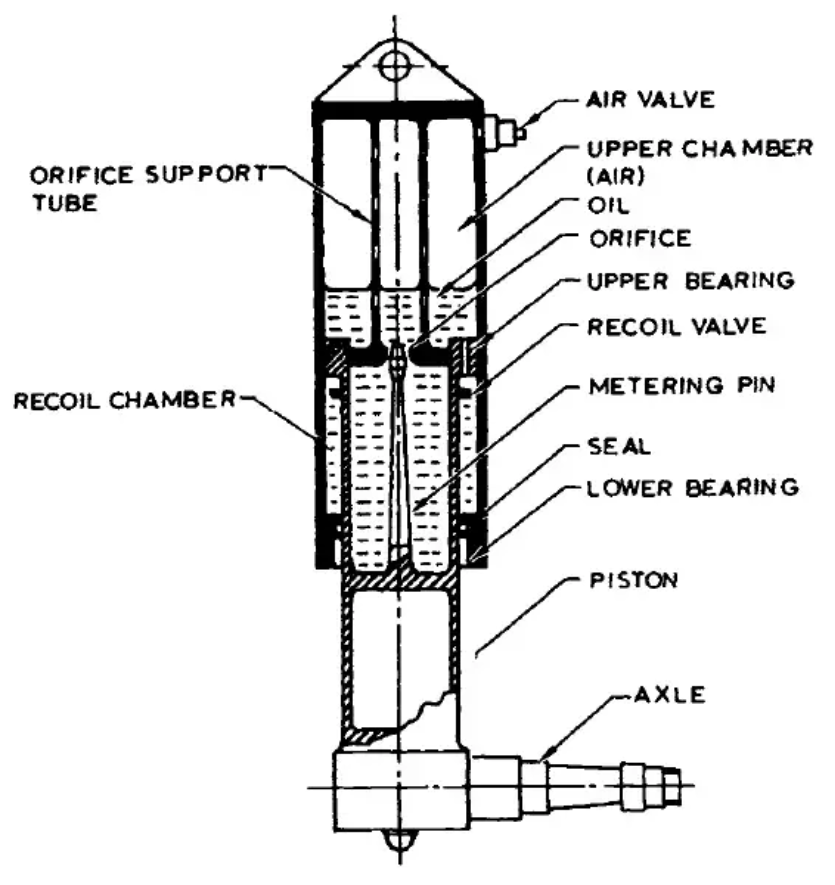 Schematic showing some of the main components of an oleo-pneumatic shock absorber. Source: Currey, N. Aircraft landing gear design: principles and practices.Many design variations of oleo struts exist. Some oleo struts contain a tapered metering rod that moves along with the piston through the center of the orifice to vary the orifice size. This continuously adjusts the rate at which hydraulic fluid enters the upper chamber, allowing a higher rate of flow at the moment of touchdown and progressively lowering flow rate as the strut reaches its point of maximum compression. This optimizes the magnitude and duration of force on the airframe due to the landing loads, spreading the force over the longest duration possible and keeping the force relatively constant over that duration.

Some oleo struts contain valves that restrict hydraulic fluid flow during recoil to prevent rapid piston motion that results in hard bounce-backs. Others have valves that open when the strut encounters an unusual loading force, such as bumps on rough fields. The pressure changes cause the valve to open and pass extra fluid to reduce maximum forces on the airframe.

Other oleo strut design variations include devices in which the piston is located above the cylinder, alternative orifice arrangements, multiple compression and recoil orifices and multiple chambers. 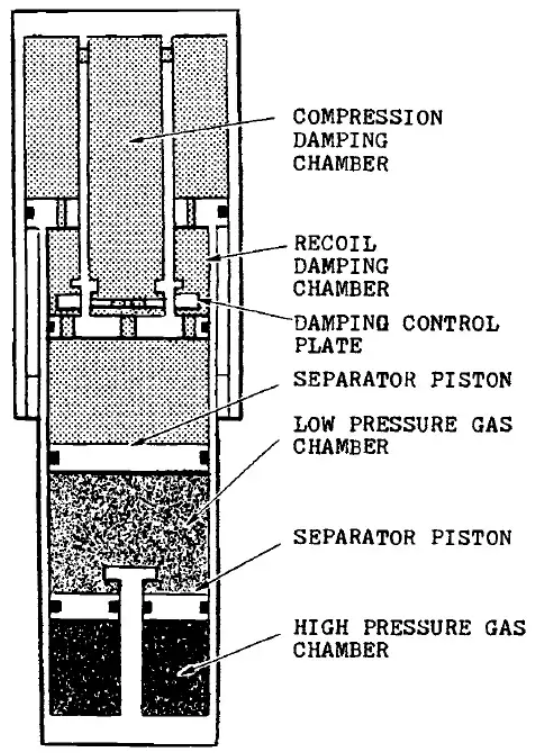 Double-acting shock struts contain multiple air/oil sections to effectively separate the load-stroke response into two operating regimes to optimize shock absorption performance for each. For example, the impact upon landing gear touchdown involves very different initial loading compared to bumps encountered during taxiing on an unpaved field. At touchdown, there is no initial load on the oleo strut, whereas during taxiing, the initial load includes the full weight of the aircraft. The load-stroke response of double-acting shock struts is designed to handle each of these situations in an optimal way.

Most oleo struts are equipped with a torque link, or scissor link, that connects the upper cylinder and lower piston to prevent rotation of the piston within the cylinder and to maintain alignment of the wheel. The torque link contains a joint in the middle to allow piston retraction and extension.

Oleo struts are also often accompanied by shimmy dampers. These hydraulic shock absorbers contain a piston and a flow restrictor that prevent rapid oscillating motion of the nose or main landing gear without interfering with slower movements associated with steering.

Important considerations when designing oleo struts include the sink speed of the aircraft, landing gear load factors and the strut stroke. 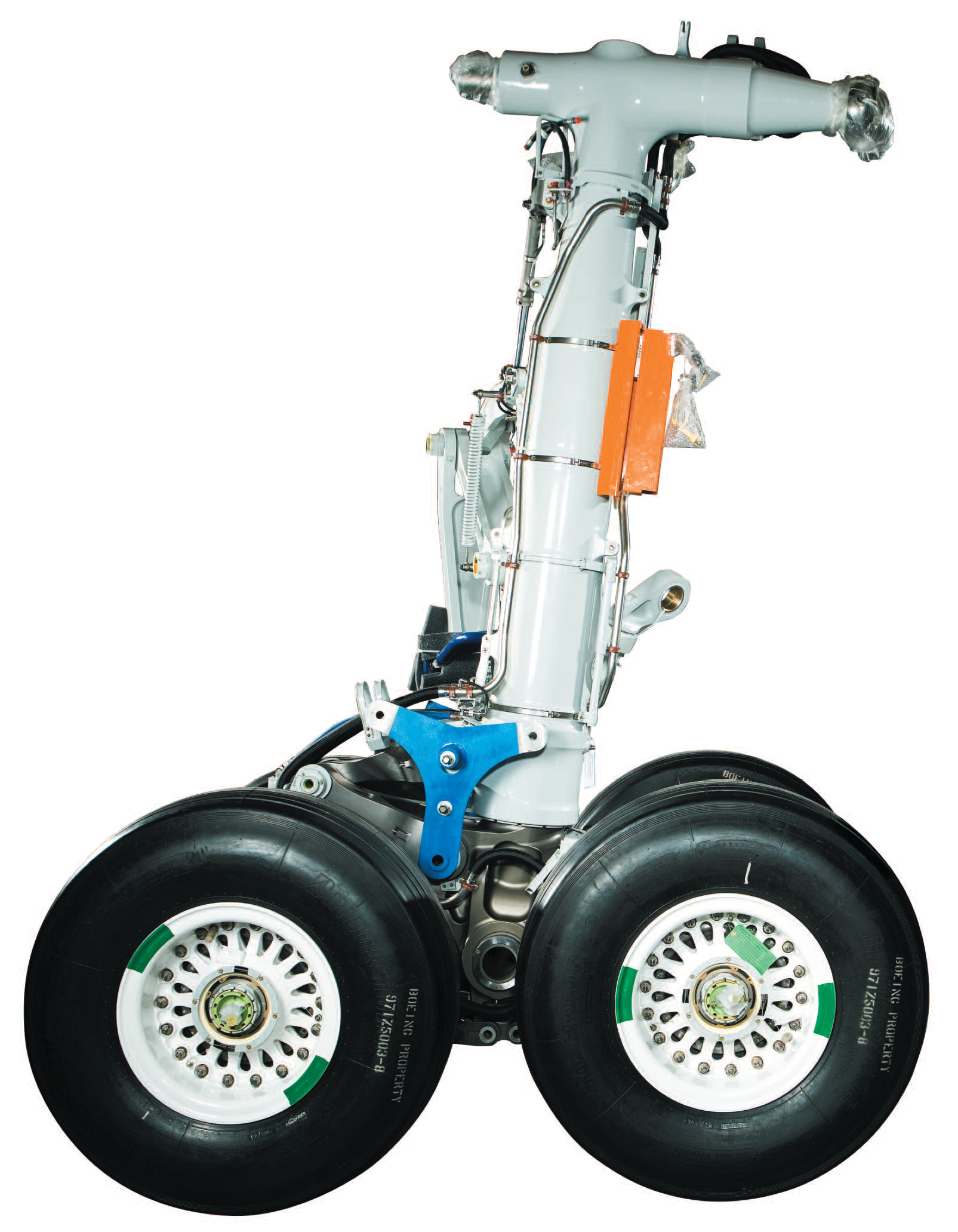 The white oleo-pneumatic shock strut cylinder is clearly visible in this image of part of one of two main landing gear legs for the Boeing 787. Source: BoeingThe sink speed describes the aircraft’s vertical speed at the moment it touches down. A typical sink speed for transport aircraft at design landing weight is 10 ft/s.

Among different aircraft types, the distance from the static strut position to the fully compressed position varies widely as a percentage of the total stroke of the piston, from percentages in the single digits to nearly 50%. A commercial passenger aircraft like the Boeing 737-200 has an extension of 15% (2.1 in from static to compressed out of a total stroke of 14 in).

Hydraulic fluids used in oleo struts are commonly required to conform to standards specifying minimum performance criteria, such as

Maintaining the correct fluid to gas ratio is critical to the proper function of an oleo strut. Parameters that control this ratio are the level of hydraulic fluid and the pressure of gas in the oleo strut.

By posting a comment you confirm that you have read and accept our Posting Rules and Terms of Use.
Advertisement
RELATED ARTICLES
Heavy-duty and customized shock absorbers, no matter where you are
How does a pressure-compensated electric motor-driven axial piston hydraulic pump work?
Sentinel 1 shock absorbers remotely optimize safety, equipment life and productivity
Harvesting Energy from a Vehicle's Suspension System
Diaphragm Metering Pumps Help Avoid Contamination
Advertisement