Audi of America is installing vehicle-to-infrastructure (v2i) technology that it says will inform drivers of how long they will have to wait until a traffic light changes from red to green. 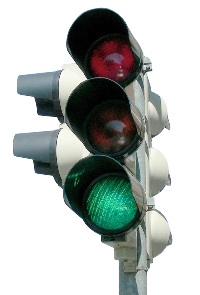 Drivers are informed as to how many seconds remain until a traffic signal changes to green. Image credit: Pixabay.

The v2i integration, developed by Traffic Technology Services (TTS), will be launched as part of Audi's Connect Prime services later in 2016. Audi is installing the technology on all 2017 Audi Q7, A4 and A4 all-road models built after June 1, 2016.

Traffic lights in municipalities with populations of over 50,000 are often controlled by a central system owned or operated by a city, county or a state department of transportation. If the traffic signal communicates via a private fiber or wireless network to a central location, TTS' Personal Signal Assistant software can connect to the signal.

When an equipped Audi enters a monitored traffic zone, the software requests and receives real-time light-phase information. The link between vehicle and infrastructure is routed via the on-board LTE data connection and TTS servers.

While the vehicle is waiting at a connected traffic light, the driver information system in the instrument cluster, as well as the head-up display (if equipped), indicates the time remaining until the signal changes to green, in the form of a countdown clock.

By posting a comment you confirm that you have read and accept our Posting Rules and Terms of Use.
Advertisement
RELATED ARTICLES
Revolutionary Road: Driving Toward Connected Automation
Porsche and Audi Challenge Tesla
Audi and Hanergy Team Up for Thin Film Solar R&D
Renesas Releases Communication Chips for Autonomous Cars
V2V Communication to Be Required on New U.S. Light Vehicles
Advertisement