Three commercial electric utilities and the Idaho National Laboratory have been chosen for a project to improve the long-term economic competitiveness of the nuclear power industry.

The Department of Energy-based project aims to enable the production of commodities such as hydrogen in addition to electricity from commercial nuclear power plants. The project also is intended to expand the use of hydrogen as a storage medium for electricity production, as a transportation fuel, or as a replacement for industrial processes that currently use carbon-emitting sources in hydrogen production. 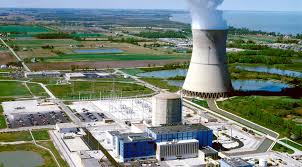 The two-year project led by FirstEnergy Solutions will initially demonstrate and deploy a 1 to 3 MWe low-temperature electrolysis unit to produce commercial quantities of hydrogen. The first site, planned for 2020, is FirstEnergy Solution’s Davis-Besse Nuclear Power Station near Toledo, Ohio.

(In February, FirstEnergy filed requests with the U.S. Nuclear Regulatory Commission related to the generating company's plan to close Davis-Besse by May 31, 2020. FirstEnergy cited competitive pressures and a lack of "meaningful" market reforms as reasons for closing the 896 megawatt power plant.)

Hydrogen from Davis-Besse may initially be used to supply public transportation fleets in Ohio, in new direct iron reduction plants being constructed to produce steel products or for other commercial products. The project is intended to demonstrate how hydrogen from commercial nuclear operations can be used to produce “green” products and commodities in significant quantities for domestic use and for export to international markets where green and low-carbon attributes are incentivized.

Xcel Energy will help determine if hydrogen production can enhance the company’s growing carbon-free footprint. Redirecting nuclear energy from electricity to hydrogen production could help balance the electrical grid with the increasing amount of wind and solar energy on the system. The company has also been testing flexible operations at its two nuclear plants in Minnesota, and hydrogen could offer a new value stream.

APS’ Palo Verde Generating Station near Phoenix, Arizona, also participates in the demonstration. Hydrogen from Palo Verde may be used as energy storage in reverse-operable electrolysis or peaking gas turbines during times of the day when photovoltaic solar energy sources are unavailable and energy reserves in the U.S. Southwest are low, and could also be used to support a hydrogen transportation fuel market.

INL is one of the U.S. Department of Energy’s national laboratories and it is a leading center for nuclear energy research and development.

By posting a comment you confirm that you have read and accept our Posting Rules and Terms of Use.
Re: These nuclear energy utilities will explore hydrogen production
#1

I find it commendable the desire to switch to hydrogen as a fuel source. I would recommend reviewing the records of german newspapers before WWII before going to far.

Hydrogen or even hydrogen + oxygen is a good fuel with many uses as long as it is not confined under pressure. Auto Tires cannot even hold oxygen for very long, and leaks become more dangerous than natural gas. No odor, and smaller leaks become more explosive.

The best way to utilize hydrogen is on demand. Make it and use it, do not attempt to store it. Remember the Hindenburg, or the lady doing laundry. She mixed softener and bleach and bowed outward the brick walls in her home. There are several examples of people modifying their cars to run on hydrogen + oxygen with good results and the on demand keeps everyone safe, and no CO2 emissions.

From what I have read Thorium is a good replacement for the plutonium in nuclear reactors for good reasons.

First it is a scrap material from most mining operations so it is very cheap.

Second once refined it is still safe to handle, so accidents do not become a great concern.

Third when time to replace the fuel nuclear containment is not required.

Forth it would allow the present distribution system to still be utilized while smaller local generation units are constructed and brought on line and only be networked if necessary. A lot less blackouts that way.

Fifth There is so much nuclear waste now that cannot be disposed of without killing everything in our streams, oceans and us. A recent article explained that one holding company has so much radioactive water they are afraid of an unintentional nuclear reaction, while others have holding containers leaking into the groundwater.

I was hoping this article was about shifting to a thorium fuel, Which is long lived mining waste product that could provide the same level of power, for pennies on the dollar, just not the waste that is used to make nuclear weapons. The only reason the oil producing countries wanted nuclear reactors.

With thorium reactors, if damaged there is no nuclear contamination. there is no contaminated waste disposal, the savings in the billions a year paid for waste storage alone would pay for the replacement.

Re: These nuclear energy utilities will explore hydrogen production
#3
In reply to #1
Lehman57

I would like to know more about this sentence: Third when time to replace the [thorium] fuel nuclear containment is not required.

As I understand it, Th is transmuted to U-233 which is fissile. Then the atom is split by fast neutrons. But what happens to these fission products?

A fast reactor, which uses Th, can also use depleted uranium (U-238) as fuel; we have plenty of it on hand. The "waste" from thermal reactors can also be used as fuel.

Re: These nuclear energy utilities will explore hydrogen production
#5
In reply to #3
randolph garrison

Sorry, What I included in the message is as much as I remember from the article I read some months ago. Search thorium and it should be available.

Re: These nuclear energy utilities will explore hydrogen production
#7
In reply to #5
randolph garrison

https://youtu.be/XMuxjHLLk0E One of the youtube articles I was referring to.

Re: These nuclear energy utilities will explore hydrogen production
#2

But are the peckerheads in power listening?

Re: These nuclear energy utilities will explore hydrogen production
#4

Generating hydrogen using electricity requires a lot of energy. Using high-priced nuclear energy makes no economic sense what so ever. In any case, it is far more cost effective to create hydrogen from natural gas, which is the method used by industry. Coal gasification can also be used, as extensively done in Asia

Further, there is no particular market for hydrogen created by nuclear plants and there is no distribution system.

Technically, generating hydrogen using electricity is straight forward and requires no research and development. The process is routinely used where small amounts of hydrogen are needed and transporting the gas from industrial production facilities is not cost effective.

The DOE efforts to generate hydrogen at nuclear power plants has no economic or technical justification.

This DOE dumb waste of taxpayer money demonstrates, once again, that the government has no business picking winners and losers in the marketplace.

Re: These nuclear energy utilities will explore hydrogen production
#6

Usually energy storage systems (e.g. the proposed hydrogen generation here) are for storing off-peak energy, so that flies. I like that idea-- nice work there.

That being said, do you think "carbon-free nuclear energy" was mentioned enough in the article? Direct carbon emission is virtually non-zero, sure. However, mining, refining, and heavy construction (concrete and steel) of the plant itself is demonstrably not carbon-free. Not to mention all the chemicals and water used in refining... Maybe I'm splitting hairs, but "carbon-free nuclear energy" is disingenuous at best.