These nukes won't close after all, owner says

Energy Harbor said it is rescinding deactivation notices for the Beaver Valley Power Station, which operates two units with a total capacity of 1,872 MW. Both units were scheduled for deactivation in 2021. 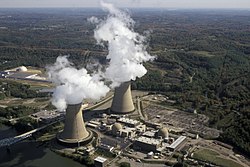 The company said it reversed its decision to close the nuclear power plants after Pennsylvania announced plans to join the Regional Greenhouse Gas Initiative (RGGI) in early 2022. The company said it would revisit deactivation if RGGI does not come to fruition "as expected." RGGI is expected to offer an incentive for zero-emission generating resources such as nuclear.

Executives with the former FirstEnergy had complained that PJM market rules placed its nuclear assets at a competitive disadvantage even though they operate with no air emissions. Permanent disposal of radioactive waste material remains a challenge for all commercial reactors operating in the U.S.

Energy Harbor said that the Nuclear Regulatory Commission was verbally notified of the deactivation rescissions and that written notification also will be made.

Re: These nukes won't close after all, owner says
#1

There is a certain irony to all this.