Gas line project was 'done wrong' and led to disaster

A natural gas line replacement project was "done wrong" and led to a fatal series of explosions and fires in suburbs north of Boston on a September 2018 afternoon, according to a blunt assessment by National Transportation Safety Board (NTSB) chair Robert Sumwalt. The accident board met to determine the cause of the Sept. 13, 2018, accident that resulted in a series of fires and explosions in Merrimack Valley, Massachusetts.

In its finding, the NTSB faulted Columbia Gas of Massachusetts for "deficiencies in management and oversight" that led to overpressurization of a natural gas distribution system. One person was killed and 22 people, including three firefighters, were sent to area hospitals. The system over-pressure damaged 131 structures, including five homes that were destroyed. 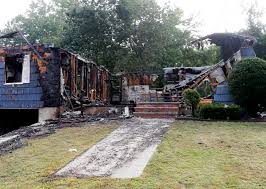 Source: NTSBPrior to the overpressurization event, a Columbia Gas-contracted work crew, which included a Columbia Gas inspector, was performing a Columbia Gas-designed and approved pipe-replacement project at an intersection. The contracted crew was working on a tie-in project that bypassed the existing cast-iron line and directed gas pressure to a new plastic line.

The bypassed cast-iron line was still connected to the primary regulator control lines, providing input to the gas pressure regulator used to control system pressure. Once the contractor crews disconnected the cast-iron line, the section containing the control lines began losing pressure. Because the gas regulators did not sense system pressure, they responded by opening fully, allowing high-pressure gas to enter the low-pressure system.

In its investigation, the NTSB found Columbia Gas of Massachusetts should have first relocated the control lines to the newly installed plastic main line after the existing cast iron main line was replaced. 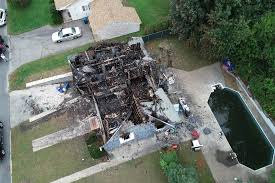 The NTSB determined that the probable cause of the overpressurization of the natural gas distribution system and the resulting fires and explosions was Columbia Gas of Massachusetts’ "weak engineering management" that did not adequately plan, review, sequence and oversee the construction project that led to the abandonment of a cast-iron main without first relocating regulator sensing lines to the new polyethylene main. Contributing to the accident was a low-pressure natural gas distribution system designed and operated without adequate overpressure protection.

In a statement, NiSource, parent of the Massachusetts gas utility said, "The NTSB's work is an important step in the effort to enhance pipeline safety. Our own understanding of the events generally aligns with that of the NTSB. We welcome today's action by the NTSB because it will help us, our industry partners, the public, and others learn from this tragedy. As we've said since that tragic day, we take responsibility for what happened."

In July, NiSource said it would pay $143 million to resolve class action lawsuits brought by residents and businesses that suffered losses caused by the accident. The settlement was separate from an $80 million accord that the company reached with the three communities in May, and a settlement between Columbia and the family of the teenager who was killed as a result of the gas explosions. The payments were part of a $1 billion commitment that Reuters reported the company made to cover financial impacts of the accident.

As a result of the investigation, the NTSB issued five safety recommendations with two issued to the Pipeline and Hazardous Materials Safety Administration, one to the Commonwealth of Massachusetts Executive Office of Public Safety and one to NiSource Inc., the gas company's parent company. Thirty-one states each received one safety recommendation.

The cast-iron, low-pressure natural gas distribution system was installed in the early 1900s and had been partially improved with both steel and plastic pipe upgrades since the 1950s, the NTSB said. The low-pressure distribution system in the affected area relied on 14 regulator stations to control natural gas at the required pressure into structures serviced by the system. Each of the regulator stations reduced the natural gas pressure from about 75 pounds per square inch, gauge (psig) to about 12 in of water column (about 0.5 psig) for delivery to customers. 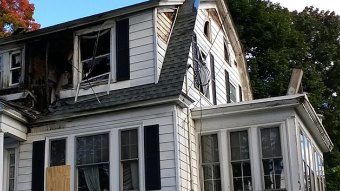 Source: NTSBPrior to the accident, Columbia Gas had a plan consisting of multiple projects to replace 7,595 ft of low-pressure, existing cast-iron and plastic natural gas main with 4,845 ft of low-pressure and high-pressure plastic gas main on South Union Street and neighboring streets.

The natural gas distribution system was owned and operated by Columbia Gas of Massachusetts. The fires and explosions damaged 131 structures, including at least five homes that were destroyed in the city of Lawrence and the towns of Andover and North Andover.

Most of the damage occurred from fires ignited by natural gas-fueled appliances; several of the homes were destroyed by natural gas-fueled explosions. Fire departments from the three municipalities were dispatched to the fires and explosions. First responders initiated the Massachusetts fire-mobilization plan and received mutual aid from neighboring districts in Massachusetts, New Hampshire and Maine.

Emergency management officials had electric utility National Grid United States shut down electrical power in the area, the state police closed local roads, and freight and passenger railroad operations in the area were suspended. Columbia Gas of Massachusetts shut down the low-pressure natural gas distribution system, affecting 10,894 customers, including some outside the area who had their service shut off as a precaution.

It said a comprehensive and formal risk assessment, such as failure modes and effects analysis, would have identified the human error that caused the redundant regulators to open and pressurize the system. The NTSB said that Columbia Gas of Massachusetts’ "inadequate planning, documentation and recordkeeping processes" led to the omission of the relocation of the sensing lines for the specific project. The abandonment of the cast iron main without first relocating the sensing lines led to the system overpressurization, fires and explosions. 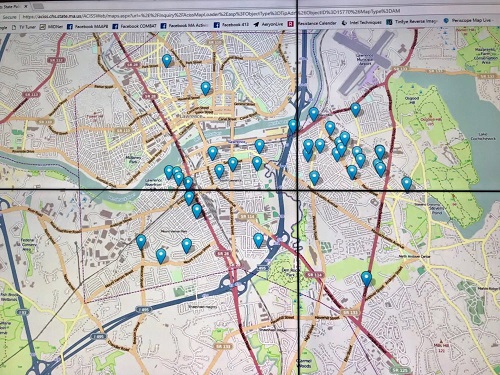 Map tweeted by local law enforcement showing locations of fires or explosions on September 13. Source: WBURIt found that the Columbia Gas of Massachusetts constructability review process was "not sufficiently robust" to detect the omission of a work order to relocate the sensing lines. It also found that NiSource’s engineering risk management processes were deficient and that requiring a licensed professional engineer to stamp plans would illustrate that the plans had been approved by an accredited professional with the requisite skills, knowledge and experience to provide a comprehensive review.

In terms of the accident response, the NTSB said that the municipal public safety answering points had available and ready resources to handle the large number of distress calls requesting emergency services. It found, however, that the field radio communications used across fire departments lacked adequate interoperability and availability to ensure that emergency responders had efficient means of interdepartmental and intradepartmental communications.

In November 2018, the NTSB issued what it said were five "urgent safety recommendations."

Re: Gas line project was "done wrong" and led to disaster
#1

Using plastic pipe to deliver flammable gas sounds less than intelligent to me.

Re: Gas line project was "done wrong" and led to disaster
#2
In reply to #1
MR. Guest

In retrospect, I have to ask if there was any (political) pressure to hurry the installation along?...

Re: Gas line project was "done wrong" and led to disaster
#3

I wonder way the GAS meters & "Pressure Regulators" that control pressure at each home & business didn't stop the over pressure rising in the homes?