The failure of an indoor mercury service regulator with an unconnected vent line led to a fatal 2016 natural gas fueled explosion and fire in a Maryland apartment building.

According to investigators with the National Transportation Safety Board (NTSB), the unconnected vent line and failed service regulator resulted in a natural gas leak that accumulated in the apartment building’s meter room until it reached explosive levels and ignited. 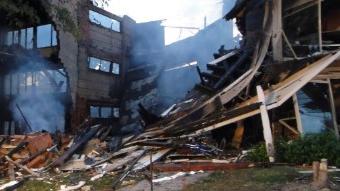 In its report, the NTSB said that leading up to the accident, there was no evidence that residents, building management or any emergency personnel notified Washington Gas of a gas odor. The investigation revealed that had Washington Gas been notified of a previous gas odor call two weeks earlier, the fatal explosion on August 10 could possibly have been prevented by a service technician entering the meter room, identifying the unconnected vent line and remedying the situation.

The NTSB said that the use of gas odorants alone does not sufficiently warn individuals in some cases of a gas system leak, such as the undetected leak that occurred in this accident.

However, had methane detectors been installed in the building, an alarm would have alerted residents to a gas release and reduced the potential and consequences of a natural gas explosion, the NTSB said. As part of its findings, the NTSB recommended the installation of fixed methane detectors that go beyond relying on smell. Methane detector alarms can provide a reliable additional safeguard, it said.

According to the NTSB report, the pattern of debris and the location of victims suggested that the explosion radiated from the meter room, where the gas meter assembly was located.

It said that an upper mercury service regulator was most likely connected to a vent line through a threaded nipple and union assembly. The regulator likely became separated from the vent line due to forces of the explosion or from the building collapse.

An external threaded socket of a second, lower mercury service regulator union most likely was not threaded to the nut. This meant that the lower mercury service regulator was not connected to the vent line prior to the explosion. Gas piping to the water heater was most likely separated at the control valve due to overstress forces resulting from the explosion.

The NTSB said that the water heater did not fail prior to the explosion and was not the source of the natural gas release in the meter room. It concluded that audible hissing noises heard by a resident, evidence of past mercury service regulator failures, the pre-existing unconnected vent line union, and the lack of evidence of any pre-existing anomalies in the gas piping or gas appliances, indicate that a failed mercury service regulator was the most likely source of the natural gas release.

By posting a comment you confirm that you have read and accept our Posting Rules and Terms of Use.
Advertisement
RELATED ARTICLES
Gas connection error led to fatal house explosion, NTSB says
Two Alarms, Then Fires and Blasts, NTSB Says
This school's gas valve looked to be closed, then it exploded
Gas line project was 'done wrong' and led to disaster
Report offers details into gas pipeline failure and blast
Advertisement