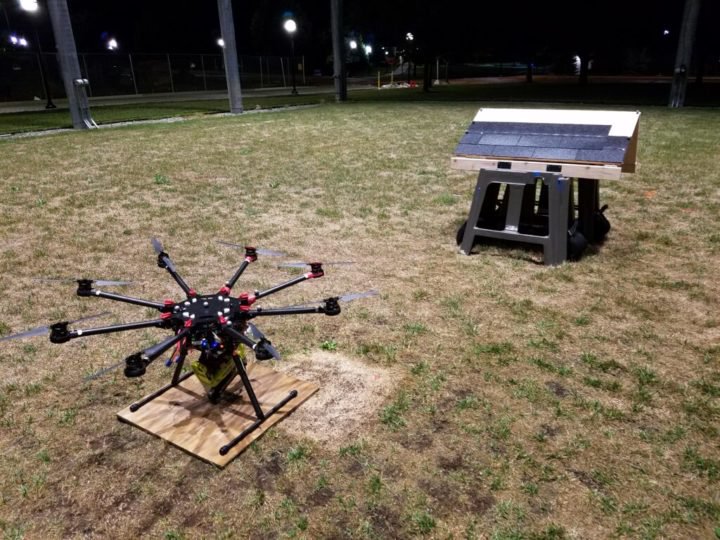 The roofing octocopter, equipped with a nail gun, is parked near a mock roof. Source: Matthew Romano, Michigan RoboticsResearchers at the University of Michigan developed a drone that installs asphalt shingles on a roof with a nail gun.

The autonomous octocopter is reportedly capable of positioning a nail gun above a targeted nailing point, triggering the gun to insert the nail, and then moving on to the next point — all without human operators.

The drone was outfitted with a nail gun and a series of markers and stationary cameras that enable it to locate itself and identify where the nails should go. Software was developed by the team to fire the nail gun. A challenge in developing the software was determining how much pressure is needed to depress the nail gun muzzle, a safety feature common on nail guns that prevents accidental discharge. At each nail site, the drone needs to apply pressure on the muzzle, often at an angled surface, but maintain flight stability.

There are key limitations to the prototype, such as the drone works slower than human roofers, working at the speed of a novice roofer, according to researchers. Additionally, the drone is currently battery powered, limiting flight time to 10 minutes due to the combined heft of the hardware and nail gun. Researchers explained that if powered by a tether, the drone could potentially operate indefinitely.

A paper titled, Nailed It: Autonomous Roofing with a Nailgun-Equipped Octocopter, was submitted to the International Conference on Robotics and Automation and is posted to the arXiv preprint server.

By posting a comment you confirm that you have read and accept our Posting Rules and Terms of Use.
Re: Watch: Nail gun drone installs roofing shingles
#1

Pretty neat, but it looks a bit slow, maybe 5 or 6 nails a minute. A good roofing guy could do 10 times this. It seems like a small robot rolling across the roof would be more efficient.

I would think that the nailing part of it is the least difficult part of the roofer's job. They have to lay out the shingles, cut them, space them, and now dodge a drone that they have to work with. Then they have to stop to reload the drone with nails. Seems that the nailing only took literally two seconds to nail the strip of shingles down by a roofer.

Might do better to have a robotic crawler type nailer developed to follow the strips as they are laid out.

Or you could have a drone that shoots all 4 nail locations at the same time.

The crawler sounds like a good idea but starting/stopping placements would be touchy.

Maybe a hybrid drone/crawler. fly to position/re position, then it would also be less likely the person laying out the shingles would be as close to the drone to get hit?

multiple peaks and valleys would be an issue either way i think.

Why nail when you can glue?A self adhesive shingle would make more sense,with a encapsulated adhesive to allow a little time for adjustment.Glue will hold more than nails.A roof traveling robot could place the shingles row by row with a roller to activate the glue.Shingles could be pre-staged for pickup by the robot.

The way to go in this is clearly a roof mounted automated robotic system.

As with much tech, quite achievable, but depends on the cost of R&D to develop it, resulting affordability of the system developed, and commercial return it would generate in terms of human labour savings.

Add the complexity of the plethora of widely varying roofing materials and systems in use worldwide and I conclude this will be a long way off being viable commercially.

Then consider the developments of Elon Musk's roofing tech business with solar panel tiles of various synthetic design finishes and many other solar panel solutions, and things are further complicated by the fact that these solutions are likely to start replacing current roofing solutions in the relatively near future.

I've been hearing about how Elon Musks amazing solar shingles will take over the world for many years now and I'm still waiting.

WHO IS PUTTING THE SHINGLES IN PLACE? COULD BE SAFETY ISSUE MIXING DRONES AND HUMANS ON A ROOF?

LOVE THE TECHNOLOGY THOUGH

quite the feat for positioning system , don't think that they are actually controlling the nail-gun , most of those type of nail-guns have a bounce feature , meaning that all that has to happen is the nail-gun is pushed against a surface an it will activate the firing mechanism.