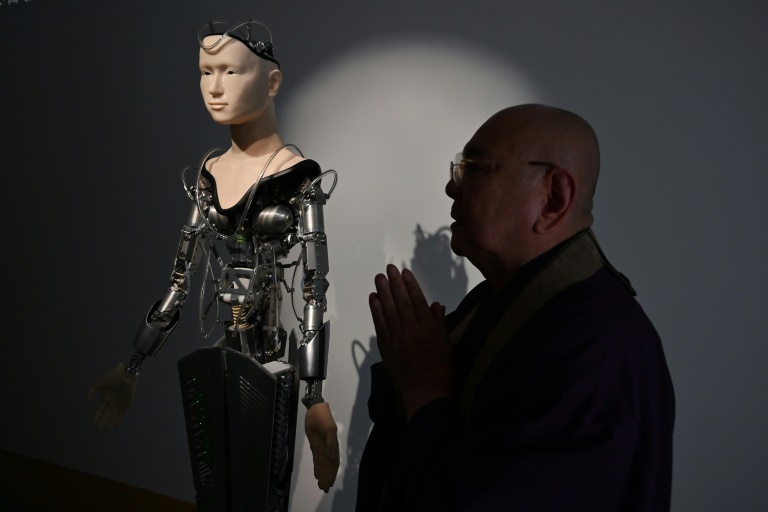 In an effort to attract younger generations to religion, a Buddhist temple in Japan now employs a robot that preaches Buddhist wisdom.

The adult-sized robot, dubbed Mindar, began reciting Buddhist writings, including passages from the Heart Sutra, a set of well-known Buddhist scriptures, to visitors at the 400-year-old Kodaiji temple in Kyoto, Japan earlier this year.

The life-like robot, who is the result of a collaboration between the temple and Osaka University Robotics Professor Hiroshi Ishiguro, was designed to represent Kannon, an archetypical Buddhist deity (otherwise known as a bodhisattva) who is the personification of mercy.

The 6 ft Mindar is composed of silicone and aluminum and is capable of moving its arms, head and torso and clasping its hands. While its face, shoulders and hands are covered in silicone to give the robot more life-like qualities, the rest of Mindar’s body is composed of visible mechanical components and the robot’s left eye houses a tiny video camera.

The robot, which cost approximately $1 million to develop, is a seemingly welcome addition to the temple according to its fellow monks who, thanks to developments in artificial intelligence (AI), believe that Mindar will be capable of acquiring unlimited wisdom.

"This robot will never die, it will just keep updating itself and evolving," head monk Tensho Goto said. "That's the beauty of a robot. It can store knowledge forever and limitlessly."

Japan is no stranger to robotic clergy. In recent years, a robot dubbed Pepper was developed to chant sutras while beating a drum. Outfitted in a Buddhist monk’s robe, Pepper is available to perform at funeral services in that country for a rate of just $450, fulfilling religious duties and live streaming services for those unable to attend.

To see Mindra in action, watch the accompanying video that appears courtesy of AFP.

By posting a comment you confirm that you have read and accept our Posting Rules and Terms of Use.
Advertisement
RELATED ARTICLES
10 robots ready to join the human workforce
Robot Dogs Laid to Rest with Proper Funerals
Robot Priests Available for Funerals
Anymal traverses and inspects Zurich sewers
Humanoid Robot Diver Recovers Undersea Treasures in Maiden Voyage
Advertisement