Desalination membrane based on nanowood

The sustainable nature of water desalination systems can be enhanced with the availability of distillation membranes sourced from a renewable material with the desired thermal and hydrophobic characteristics. A nanostructured wood membrane was demonstrated by an international research team to be more efficient relative to petroleum-based plastic membranes commonly used for desalination.

Samples of American basswood were treated to remove hemicellulose and lignin, followed by treatment with silane to impart hydrophobicity. The wood was then sliced into sheets about 500 microns thick and suspended over a source of water vapor. As the water is heated and moves into a gas phase, the molecules become just small enough to squeeze through the tiny channels within the treated wood, allowing salt-free 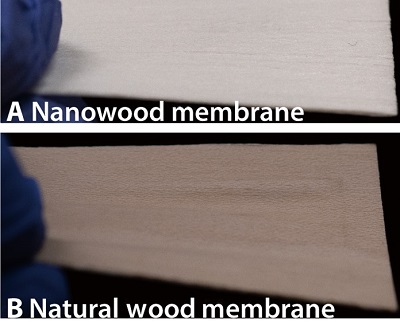 During experiments, the nanowood material exhibited good water flux and excellent thermal efficiency of up to 70%, comparable to or even higher than commercial polymeric membranes derived from petroleum products. The exceptional thermal efficiency was attributed to its high intrinsic permeability and low thermal conductivity, which promoted convective and conductive heat transfer, respectively. The nanowood membrane also produced 1.2 times the freshwater permeate of the commercial polytetrafluoroethylene membranes per kilojoule of heat energy at 60° C.