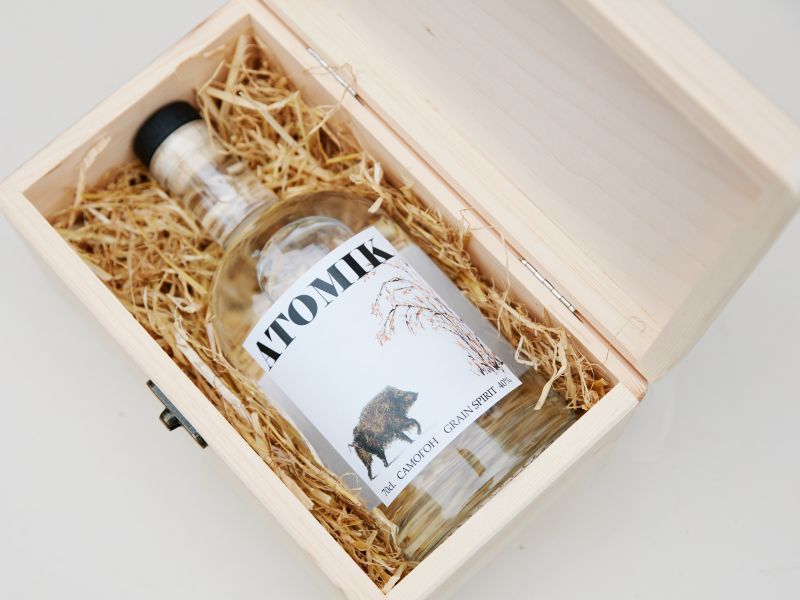 Atomik Vodka. Source: The University of PortsmouthFollowing on the heels of the popular HBO series Chernobyl, which details the 1986 Chernobyl Nuclear Power Plant explosion in the Ukraine, a group of scientists from the University of Portsmouth, U.K., have created a safe-to-drink artisanal vodka using grain and water sourced from areas surrounding the nuclear disaster site.

To create the vodka, which has been dubbed Atomik, scientists from the University of Portsmouth have sourced both grain and water from Chernobyl’s Exclusion Zone, which is a 1,000-square-mile radioactive contaminated area that scientists suggest won’t be safe to inhabit for as many as 24,000 years, as well as a region known as the Zone of Obligatory Resettlement.

For three years, scientists led by Jim Smith, an environmental scientist at the University of Portsmouth, have investigated how radioactivity transferred to crops in regions of the Exclusion Zone and the Zone of Obligatory Resettlement. Scientists submitted a working paper to Ukrainian officials that detailed how to safely use the land in those sections to assist in the economic recovery of that region. As part of their demonstration, the team of scientists focused their farming efforts on a plot of land near the Opachichi settlement, which is one of the less contaminated regions of the Chernobyl Exclusion Zone. Although officially abandoned, a few settlers remain there, according to reports.

While conducting their research, the scientists tested rye grown on that plot of land and discovered the presence of radioactivity in the grains. Levels of strontium-90 just slightly exceeded the safety limits determined by Ukrainian officials. However, after the scientists distilled the rye, the only detectable radioactivity discovered in the alcoholic byproduct was in the form of carbon-14, present in the same amounts as in any other spirit, according to the team.

“As every chemist knows, distillation of fermented grain leaves many heavier elements in the waste product so the distillate alcohol is more radioactively ‘pure’ than the original grain,” scientists explained on the Atomik website.

The distilled alcohol was then diluted with mineral water sourced from a deep aquifer located roughly six miles south of the reactor site. The authors explained that the radionuclides analyzed in the groundwater were under the limits of detection. Additionally, the team employed computer models to approximate the risk posed to farmers working on the plot of farm land as they are likely to experience radiation exposure by way of inhalation or accidental ingestion of the soil. However, the scientists determined that exposure levels to farm workers were significantly below “reference occupational (non-classified) worker exposure” rates.

For now, the team of scientists has produced just one bottle of Atomik. Yet they call it perhaps the most important bottle of spirits in the world. This is largely due to the potential in terms of economic recovery for the area, which, in addition to the health effects of the disaster, also experienced devastating social and economic implications as well.

Atomik will eventually be produced under the Chernobyl Spirit Company with the goal of releasing 500 bottles in 2019 alone. To begin, the vodka will only be available for sale to those visiting the Exclusion Zone, with 75% of the profits going toward wildlife conservation and to communities impacted by the disaster.

By posting a comment you confirm that you have read and accept our Posting Rules and Terms of Use.
Re: Scientists create vodka with ingredients from Chernobyl Exclusion Zone
#1

For those who don't mind killing some brain cells with every drink, a little radioactivity should make little difference.

Re: Scientists create vodka with ingredients from Chernobyl Exclusion Zone
#2
In reply to #1
Stef

Give a man a problem and he will drink to its solution!

Re: Scientists create vodka with ingredients from Chernobyl Exclusion Zone
#3

Next in this series :

A team of " scientists " , describe the long term health benefits of drinking vodka distilled and sourced from radioactive waste.

Re: Scientists create vodka with ingredients from Chernobyl Exclusion Zone
#4

I hate those hangovers when your hair falls out!