Artificial muscle systems designed for robotics, prosthetics and other applications have made use of servo motors and shape-memory metals, often resulting in complex, cumbersome equipment difficult to produce at desired scales. A more bio-inspired approach pursued by MIT engineers has resulted in the development of artificial muscle-like fibers that can quickly contract and expand, and are easily fabricated in a variety of sizes.

The new polymer fiber-based actuators take their cue from cucumbers, or more accurately from the tightly 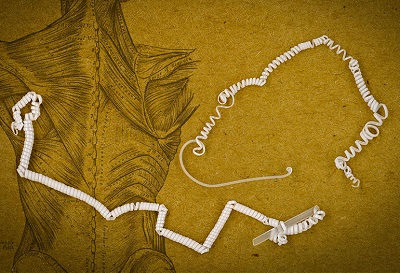 Coils in the fiber curl even tighter when heated. Source: MITcoiled tendrils sprouted by young plants to grab onto surrounding objects and support themselves. A fiber-drawing technique fuses a stretchable cyclic copolymer elastomer with a stiffer thermoplastic polyethylene, materials with different rates of expansion when heated. As the joined material heats up, one side will attempt to expand faster but is held back by the other material, causing a bend or curl toward the side that is expanding more slowly.

Exposure to heat was demonstrated to tighten up the coil and generate a strong pulling force, a process that was reversed with the removal of thermal stimuli. The researchers repeated this cycle 10,000 times, and confirmed that a single fiber could lift loads of up to 650 times its own weight.

Conductive nanowire meshes incorporated into the fibers during fabrication can serve as sensors to signal the precise tension experienced or exerted by the fiber. These materials could also include heating elements such as optical fibers or electrodes, providing a way of heating the fibers internally without having to rely on any outside heat source to activate the contraction of artificial muscles in robotic arms or grippers and in prosthetic limbs. 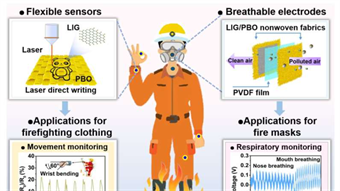