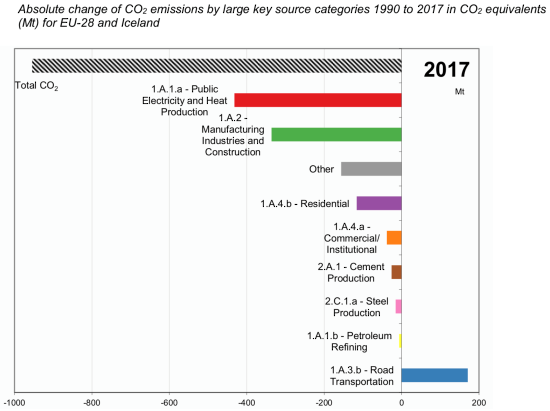 Much of the 0.7% rise in emissions documented during 2017 is attributed to increases in carbon dioxide emissions from road transportation. Most of the increase was accounted for by higher diesel consumption by trucks and vans, but consumption and emissions also climbed for passenger cars. Emissions from international aviation increased substantially due to higher demand and consumption of jet kerosene. Across the EU, several industrial sectors also recorded higher emissions in 2017 as a result of higher economic and industrial activity compared to 2016.

Greenhouse gas inventory data for 1990-2017 show that emissions have declined since 1990 as a combined result of policies, economic and structural factors and, on average, milder winters. The U.K. and Germany accounted for about 50% of the total net reduction in EU emissions during the past 27 years.

Total emissions decreased by 1,327 million tons since 1990 (or 23.5%), reaching their lowest level during in 2014 (4,307 million tons of carbon dioxide equivalent). The largest emission cuts have been made in the energy sector, due to efficiency improvements, increased use of renewables and a less carbon-intensive mix of fossil fuels — more gas and less coal and oil.

Collapsing economies and mild winters....what's next? You can't keep increasing energy costs in a stagnate economy....