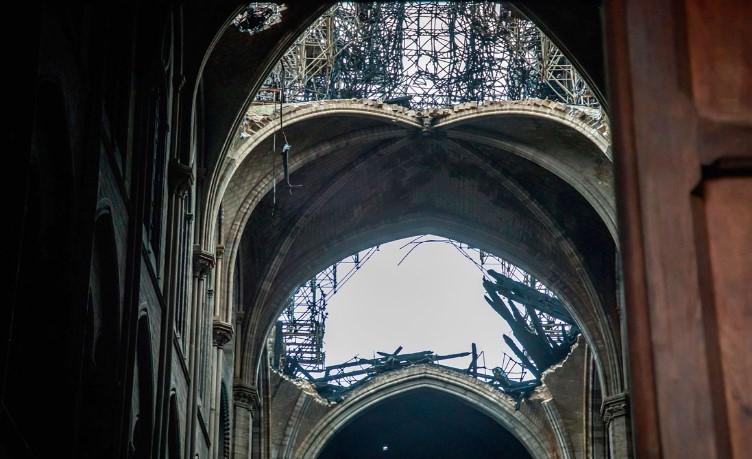 The fire that destroyed the roof of the 850-year-old Notre-Dame de Paris Cathedral damaged the structure's physical aesthetics and left experts with a restoration project that could take years to complete.

Less noticeable but no less culturally important is the possible damage the fire dealt to the Gothic cathedral's iconic acoustics, a unique fingerprint that resulted in part from its soaring stone pillars and iconic vaulted ceiling.

Many music historians trace the development of what is known as polyphonic music (that is, music consisting of two or more simultaneous musical lines) to composers working at the newly built cathedral during the 12th and 13th centuries.

Visitors to the landmark structure in the heart of Paris not only marveled at its soaring spaces and stained glass windows, but also at the cathedral's acoustics. Sound generated within the cathedral experienced a six-second reverberation time at mid-range frequencies, according to acoustics expert Brian F.G. Katz. That made Notre-Dame's acoustics “as full as you can imagine, with the reverberant energy coming from all around," he told the Acoustical Society of America. 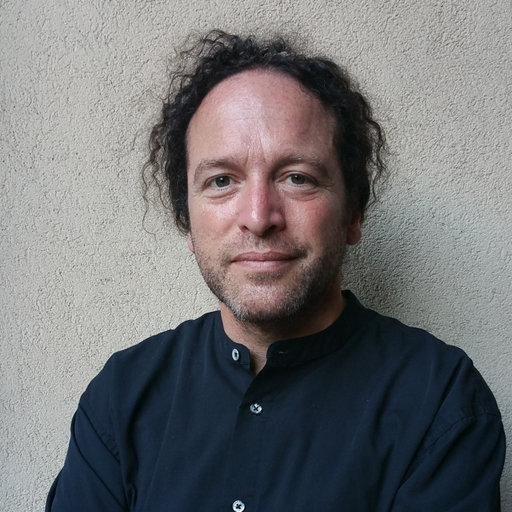 Brian F.G. KatzIn April 2013, Katz, who is a research director with the Centre national de la recherche scientifique (CNRS) at Sorbonne Université in Paris, led a team of researchers to obtain detailed measurements of acoustics within the cathedral's main space.

From those measurements and other documentation, Katz and colleagues created a geometrical acoustic room model. They then calibrated it to the measured responses' acoustic parameters using a numerical simulation software call CATT-Acoustic, which is used by acoustic consultants and researchers.

(Watch a video, below, of a "ghost orchestra" performance in Notre-Dame based on Katz's research. Learn more about the Ghost Orchestra project.)

These acoustical measurements hold new significance in the fire's aftermath.

First, the documentation may help architects and engineers as they consider how materials used in reconstruction might affect the cathedral's overall sound quality. Wooden panels and paintings within the cathedral act as acoustic absorption and diffusion surfaces and can have significant impacts on the resulting acoustics, he told the society.

Second, the measurements may also be used in a virtual reconstruction, providing a way for people to listen to performances within the lost acoustics.

Engineering360 editorial director David Wagman exchanged emails with Katz in mid-May to gain greater insight into some of the unique characteristics of Notre Dame Cathedral and the likely challenges restorers will face in the coming years if they hope to recreate that "Notre Dame sound." 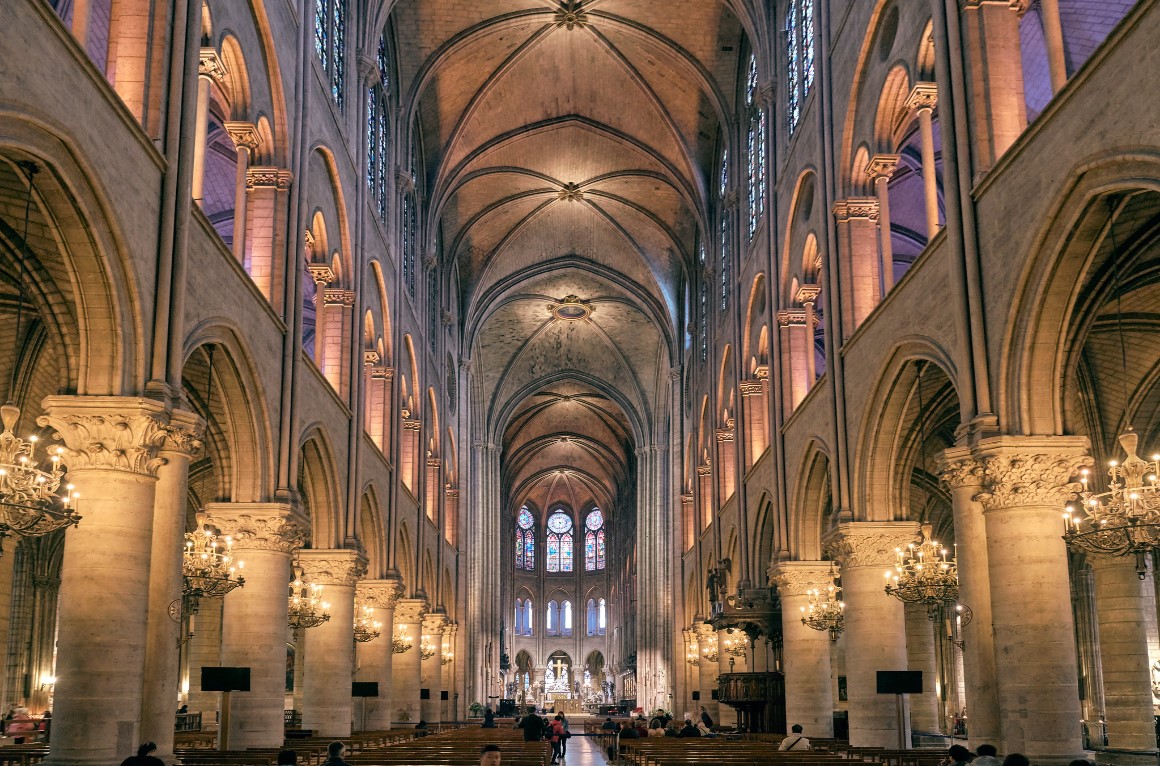 Panorama of the interior of the Notre-Dame Cathedral. Source: Pedro Szekely / CC BY-SA 2.0

Engineering360: What are the primary factors in a Gothic structure, such as Notre-Dame that account for these buildings’ acoustic qualities?

Katz: I’m not a specialist in architecture, so I am not sure what differentiates specifically Gothic structures. But, in general, the large open volumes, high ceilings, and predominantly stone surfaces (i.e., lack of acoustic absorption) all contribute to the long reverberation time and high diffusivity of the sound field.

Notre-Dame is large and wide, compared to other Parisian churches, and this will definitely have an effect on the perceived acoustics. This means that sounds linger, mix, and blend, rather than being trapped in smaller alcoves. This is ideal for a large repertoire of organ music (though there is also more contemporary organ music written for drier acoustics). The same is true for religious chants which use [these] long mixing acoustics to provide a specific musical feeling.

The downside of course, is that intelligibility is poor, for the spoken work or for music which employs short precise notes and distinction. I heard a performance of the choir soloists in which they were able to play on the complex acoustics of the cathedral, moving in and out of the transept, altering the way their voices excited the grand acoustics versus the closer acoustics of a subsection of the nave. That musical performance left an undeniable impact on me.

Engineering360: Please explain the importance of the vaulted ceiling in determining the sound quality of a Gothic cathedral.

Katz: As part of the stone structure, the vaulted ceiling is an important acoustic reflecting surface. For sound to come down, it must hit this surface. The fact that it is vaulted, as opposed to flat, increases the mixing nature of ceiling reflections, [sending] the downward directed sound in all directions. 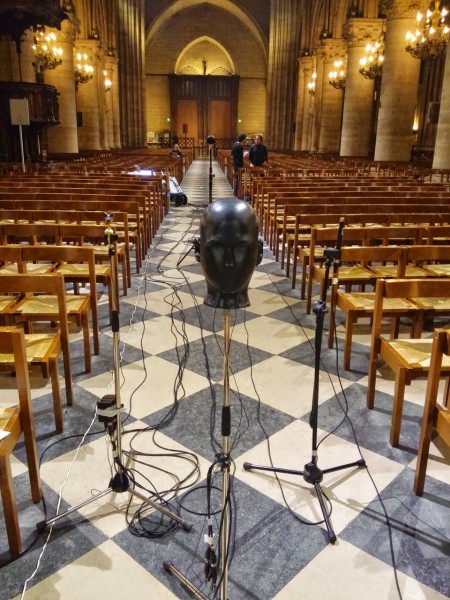 Research team sets up equipment to document the acoustics of Notre-Dame cathedral. Source: Brian FG KatzMany other churches often have exposed wooden ceilings, making them a significant acoustic absorbing surface. These typically have exposed beams [and] details, further increasing the surface area of the ceiling and resulting in more scattering, likely resulting in even more absorbing effect.

Engineering360: What are the principal design factors from an acoustic-quality perspective that engineers and architects will need to keep in mind as they seek to reconstruct Notre-Dame’s ceiling and roof?

Katz: In my opinion (and I am not involved in the reconstruction or any design proposals currently being considered), the key acoustic elements of any project are geometry and material choice.

For Notre-Dame, if there are proposals to alter the shape of the vault, these should be examined regarding the acoustic impact. Using our calibrated numerical geometrical acoustics model, and the room acoustic prediction software CATT-Acoustic, we can readily compare the acoustics of the cathedral before the fire to any architectural proposal.

Aside from the vault, there may also be questions concerning the wall finishes of the nave. There were many wooden panels and installations as well as paintings. As there are few absorbing surfaces in the cathedral, these few non-stone or glass elements contribute to the acoustics.

Our research comparing measurements in 2016 to those carried out by the same lab in the 1980’s has already shown that the addition of carpeting in the circulation areas had a noticeable effect on the acoustics. A key question for the restoration project will be the target condition of the restoration. As with all building acoustics, it is easier and cheaper to treat the acoustics during design rather than after the fact. Acoustics is the result of many structural and finish design choices, and some choices are difficult or impossible to correct after the fact.

Engineering360: Historically, Notre-Dame has been linked with the creation of polyphonic music whose harmonies have gone on to differentiate Western music from other cultures. What role did the cathedral’s acoustical quality play in developing polyphonic concepts? Was it a function of the structure and its acoustics or perhaps more simply a function of a talented gathering of musicians who happened to be based at Notre-Dame?

Katz: I am not a musicologist, so I am not well placed to respond to such questions. However, I would place more importance on the political position (in the larger sense of the word) of Notre-Dame at the time over its specific acoustics relative to comparable structures in the region. That being said, the acoustics reflect the space, and Notre-Dame is significant in its size producing the accompanying grand acoustics. Smaller, less reverberant, spaces would not produce the same effect.

As part of their 2013 measurement exercise, Katz and his research team obtained measurements using a collection of omnidirectional, 3D (first order ambisonic) and dummy head (binaural) microphones. Several dodecahedron loudspeakers were situated inside the cathedral, representing either typical source positions or the positions of a series of measurements carried out in 1987.

The researchers used mostly pro-audio hardware because it often provides a better signal-to-noise ratio and the installation proved easier than laboratory measurement equipment.

During the measurement process, the researchers used a 20-second exponential sweep-sine signal, or chirp, and deconvolution to obtain the room impulse response. This response, or the acoustic signature, for each source and receiver pair characterized how the room transforms the sound from source to receiver. Once set up, the measurements took a little more than one hour. Most of the time involved moving microphones around the space.