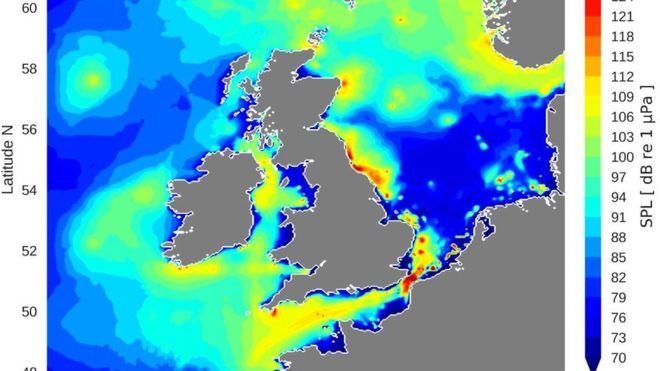 Source: Mariam Issimdar/BBCMarine scientists from the Centre for Environment, Fisheries and Aquaculture Science (Cefas) have created what is considered the U.K.’s first underwater shipping noise map.

To create the map of underwater shipping noise, the scientists installed microphones on the seabed where they gathered data to identify heavily trafficked areas and hotbeds of activity for more than 18 months. During that time, the microphones were placed all around the U.K., recording audio for three months at a time at each location. The team discovered that, according to the data, ship propellers were the greatest contributor of widespread underwater noise. The team also discovered that the loudest locations tended to be highly trafficked areas including the Strait of Dover, which is reportedly the world’s busiest shipping lane and the route to Felixstowe, a busy container port in Europe.

Calling on findings from underwater noise studies in the U.S. that suggest whales in particular have adjusted their pitch so they can be heard over the din of shipping noise, the team, led by Dr. Nathan Merchant from Cefas, was inspired to create the underwater shipping noise map to better understand the impact of underwater noise on marine life.

Dr. Merchant said: "The kind of effects we're concerned about are things like masking, which is where noise might get in the way of communication signals that marine mammals and fish use underwater.

"Whales can communicate over large distances and there's evidence that shipping noise can interfere with that, and that whales have had to change the way that they call, so calling louder, calling at different frequencies.

"This can affect how much energy they have to communicate, and how far they can communicate and this is something we're concerned about."

Using the underwater noise data collected by Cefas’ scientists, the team will attempt to understand if marine mammals are intentionally avoiding highly trafficked areas and which mammals seem to be the most affected by loud underwater shipping noise.

By posting a comment you confirm that you have read and accept our Posting Rules and Terms of Use.
Re: Scientists create UK's first underwater shipping noise map
#1

'if marine mammals are intentionally avoiding highly trafficked areas' Of course they will avoid these high traffic areas, How would you fell about being clocked on the head with 20 tonne spinning brass propeller or ran over by a super tanker.

I'm quite sure anything would avoid the areas, besides, the seas around the UK are too cold and dirty for whales to holiday there. Whale tourists are just not attracted to the UK.